During this time of pandemic, we must not gather for public acts of worship in our churches.
Mass will be said by the priest in private instead.

We want everyone to understand that in these emergency circumstances, and for as long as they last, the obligation to attend Mass on Sundays and Holy Days is removed. This is, without doubt, the teaching of the Church (Catechism of the Catholic Church 2181). This pandemic is the ‘serious reason’ why this obligation does not apply at this time.

The parish of St Richard serves the market town of Buntingford and surrounding villages, we are a warm, friendly parish with a historic church located in the heart of the town. We meet each Sunday and also throughout the week to celebrate our faith. Everyone is welcome.

The church was designed as a modern Gothic building in early perpendicular style by Arthur Young, a well-known architect of many churches, using St Aldhelm Box Ground stone (from Bath) and flint. It was built by the Buntingford branch of Jacklin & Co under Mr G. Handy, the local manager. The presbytery was built after the nave and sacristy but the whole was completed in 1914. 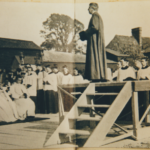 The foundation stone of this church was laid on 16th May of 1914 by notable priest and author Mgr Robert Hugh Benson who lived locally at Hare Street House and helped fund its construction.  Dedicated to St Richard of Chichester, it was opened on 21st January 1915. It is also officially the Benson Memorial church after Mgr Benson. 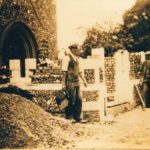 Construction of the church tower, 1939

The Lady Chapel, which was mainly financed by an anonymous American lady, was added in 1916, along with the presbytery. As money was donated, so the building was further added to; the porch in 1934 and the tower in 1939. The completed structure was consecrated by the Right Rev. Edward Myers, Bishop of Lamus, on Wednesday 5th June 1940. 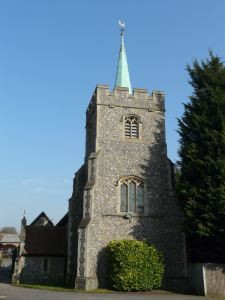 The tower is 45 feet high with a copper spire of 35 feet. The ceiling of the nave is of barrel vault type, finished entirely in oak.

The floor of the sanctuary is marble mosaics, while the altar and reredos are of Bath Stone with yellow Sienna marble. There are some interesting stained glass windows with dedications.

It was hoped also to include a piece of stone from St Richards own Cathedral at Chichester, but in those unecumenically minded days the Chapter of Chichester refused to supply it in return for a piece of the Buntingford church to be built into the new Anglican church in Sussex.

The Great flood at Buntingford on 16th September 1968 penetrated the church and the church and the presbytery to depth of four or five feet, distorting the wood block flooring of the nave and damaging many books and possessions of the priest, Fr.P.Smyth. Later, but not as a result of the flood, the tower needed structural repairs costing some £3000.