In 1892, Canon Cornelius Keens, known as “the church builder”, obtained permission from the Cardinal Archbishop of Westminster, Herbert Vaughan, to found a new parish in the central, older part of Chelsea, in territory taken from St. Mary’s Cadogan Street, the “Mother Church”.

The church, dedicated to Our Most Holy Redeemer, was built between June 1894, when Cardinal Vaughan laid the foundation stone, and October 1895, when he opened it, on the site of William de Morgan’s pottery. It was consecrated 10 years later, on 21st June 1905, by Archbishop, later Cardinal Bourne. 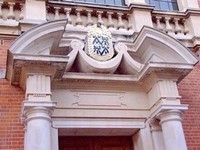 Uniquely, amongst all parishes having St. Thomas More as patron (his name was added to the dedication following his canonisation in 1935, the quadricentenary of his martyrdom), this one is located a stone’s throw from the house where he lived from 1524 until he was taken to the Tower and subsequently executed on 6th July 1535.

The house, renamed Beaufort House by the Cecil family who acquired it after St. Thomas’s execution, stood astride what is now Beaufort Street, and the diocesan seminary, Allen Hall, is located in a part of its grounds. St. Thomas worshipped and served mass in Chelsea Old Church, where he built a chapel and the tomb where his first wife, Jane, who died in childbirth, was buried.

Designed by Edward Goldie (who also designed St. James’s Spanish Place and the chapel at Ushaw College) in what has variously been described as the Wren style, Italian baroque and Renaissance classical, the church was built, under Goldie’s supervision, by Messrs. Goddard of Farnham and Dorking. The floor was laid by Messrs. Duffy in wood blocks of what is believed to be Oregon pine.

The church fortunately escaped extensive damage when it sustained a direct hit during the war, but the organ was completely destroyed, and the west window and the floor needed repair.

Further general restoration was carried out under the instructions of the then parish priest, Canon Alfonso de Zulueta, advised by Messrs. Bartlett and Purnell of the Art and Book Company, in 1962. It was at this stage that Goldie’s side chapels, except for the Lady Altar and St. Thomas More’s Altar were removed.

During the War, the crypt of the church was used as an air raid shelter. On the evening of Saturday 14th September 1940, between 80 and 100 people were sheltering in the crypt when the building sustained a direct hit. A high explosive bomb crashed through both the west window and the floor, before exploding in the crypt, killing 19 people, including the air raid warden, Bert Thorpe.

Rectors of our Church – with dates of appointment