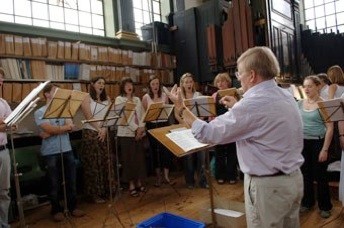 The strong tradition of Sixteenth Century polyphonic performance a capella at Holy Redeemer goes back to a happy coincidence in the early 1960s. The then Parish Priest, Canon Alfonso de Zulueta – scion of a noble Spanish family with extensive ecclesiastical connections in Spain, began unearthing, from dusty archives in cathedrals, the much-neglected treasures of the Golden Age of Spanish music, now familiar names like Guerrero, Morales and Lobo.

The then Director of Music, John Hoban – later at the London Oratory – was so enthusiastic about the music that he formed the Scuola di Chiesa, based on the church choir, which promoted this unknown repertoire throughout the UK and continental Europe, and was heard regularly on the BBC and at the Promenade Concerts.

Hoban was succeeded on his move to the Oratory by a choir member, Malcolm Ferguson, a much-loved figure whose tenure was sadly cut short by his untimely death.

Read an outstanding review of Sophie Bevan’s solo debut at the Wigmore Hall on 7th January 2011 on Damian Thompson’s blog in The Telegraph. Click here.

The Director is available to discuss music requirements for weddings and funerals (Telephone 07513 456 592).