Please be aware that numbers are very limited due to social distancing.
You will need to book using the EVENTS page of this website.
Please, read the booking guidelines very carefully.

WEEKDAY MASSES
Rickmansworth: Wednesdays and Fridays 9.30am (except on days when there is a funeral.
No need to book. Places allocated on a first come, first serve basis

On other weekdays the Mass will be celebrated by the clergy privately at 9.30am, but you can participate via livestream through the link on the main page, or under the 'MASS ONLINE: LIVE-STREAMING' tab. Mass is livestreamed every day. 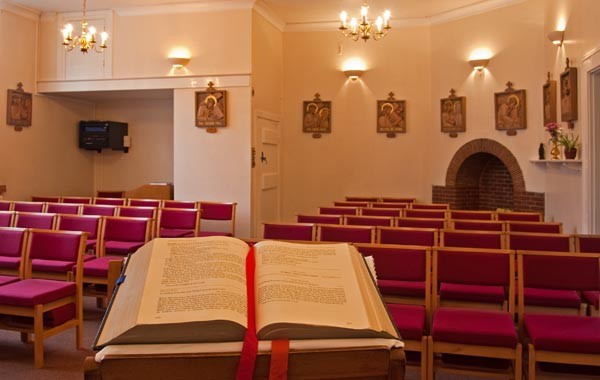 Hill Cottage was formerly a private residence incorporating a large ground-floor studio suitable for conversion into a Chapel. It was once used as a rehearsal room by Sir Henry Wood, the conductor and founder of the Promenade Concerts at the Royal Albert Hall. The house was extended in the early part of the twentieth century to a design by the celebrated architect, C F A Voysey. Hill Cottage remains a Grade II listed building.

We are a small parish of about 120 people, ably led by Father Shaun Church (Parish Priest) and Father Damian Ryan (Assistant Priest). Our Parish Pastoral Council works with Father Shaun in developing the life and mission of the parish.  Several social events take place throughout the year.

We are very ecumenical in outlook and participate in several events with other Chorleywood churches throughout the year. The largest of these is Christian Aid week, when as well as helping with a house to house collection we host a 3 day event selling plants, books, cakes and bric-a-brac.

Our major fund raiser is our Christmas Fair held at the end of November. The money raised is all given to charity and is split 3 ways. One third is for the Zambian missions, one third for the Cardinal Hume centre for the homeless in London and the final third to top up collections throughout the year.

In Lent and Advent Father Shaun and Father Damian arrange spiritual activities which help to prepare us for the celebration of Christmas and Easter.

Social events include a pre-Lent social and a summer BBQ.

Children are usually prepared for First Holy Communion in the parish.  Confirmation and RCIA preparation are undertaken in collaboration with Our Lady’s, Rickmansworth and St John’s, Mill End.

We have a Ladies group which meets monthly in different houses.

We have a modern sound system and we also have facilities for the disabled.

In 1903, the Assumptionist Fathers established themselves in Rickmansworth. For the first six years they had to be satisfied with a tin hut in the High Street as a place of worship until, in October 1909, the present church of Our Lady Help of Christians was opened. As well as the people of Rickmansworth, the parishioners included residents of outlying mainly agricultural districts such as Chorleywood.

Few people had cars and Chorleywood Catholics were obliged to walk to Rickmansworth, and then back again, to attend Mass. This practice continued right up to and during the 1939-1945 war years, a time when transport was in particularly short supply. Kathleen Doig, who died only in 1998, was one of those who told of how a group would set off, taking a short cut across the Common and then along the A404 to the little church at the bottom of Scots Hill. “The walk back home again was the most tiring, and then one had to get on and cook the Sunday lunch”, she said.

By 1944, some ten Catholic families were living in the Chorleywood area, including Kathleen, and they managed to persuade the Assumptionist Fathers to allow a priest to travel to Chorleywood to say one Mass each Sunday. Initially this was held in the Memorial Hall. This arrangement continued until 1953 when Harry Hitchings and his family moved into Rosebank, a short way down Shire Lane from our present church of St John Fisher.

The Hitchings family then generously offered the use of their ground-floor living room for Mass on Sundays and Holy Days of Obligation. These were the occasions of the first House Masses in Chorleywood. Newcomers found it strange to be kneeling behind a sofa or an armchair! Others less fortunate had to make do with the wooden tip-up chairs, some of which are still in use today when extra seating is required.

In 1948, the parishioners realised the need to provide finance for future development and started a fund known as the Chorleywood and District Catholic Church Building Fund. Due to the energetic organisation by Kathleen Doig, Mrs Mumford, Mrs Clarke and others of such activities as whist drives, coffee mornings, sales of work, socials and dances, and to generous contributions from the Morrell family, this fund had risen to over £600 by 1953.

At that stage, it was decided to invest the proceeds in a plot of land at the bottom of South Road as a site for a future church. Unfortunately, it was not possible at that time to obtain planning permission and the Diocesan Trustees, in their wisdom, decreed that the plot should be sold. We received £750 for a plot on which three houses now stand! At a later date, we suggested another plot that was for sale at the bottom of Blacketts Wood Drive. The Vicar General came down from Westminster to look at it, but instantly decided it was quite out of the question since the land was in the Northampton Diocese, and he returned to London without further debate. Today, the whole of Chorleywood is in Hertfordshire.

Between 1953 and 1955, considerable development took place in Chorleywood, resulting in an influx of new residents and an increase in the number of Catholics. Rosebank was bursting at the seams so that, unless you got there early, you would have had to stand in the entrance hall or maybe perch on the stairs.

Fr Brendan Fox A.A., then Parish Priest of Rickmansworth, realised that something must be done to find a larger site and, after much deliberation, decided to purchase Hill Cottage, our present Chapel. The £750 from the sale of the plot in South Road was put towards the cost, approximately £4,000, with the balance raised through a mortgage.

The first Mass was celebrated at Hill Cottage in September 1955, and the Chapel was dedicated to St John Fisher.