Please be aware that numbers are very limited due to social distancing.
You will need to book using the EVENTS page of this website.
Please, read the booking guidelines very carefully.

WEEKDAY MASSES
Rickmansworth: Wednesdays and Fridays 9.30am (except on days when there is a funeral.
No need to book. Places allocated on a first come, first serve basis

On other weekdays the Mass will be celebrated by the clergy privately at 9.30am, but you can participate via livestream through the link on the main page, or under the 'MASS ONLINE: LIVE-STREAMING' tab. Mass is livestreamed every day.

Fr. Shaun Church was born in 1964 in Rochford, Essex.  Brought up in the Church of England, he was received into the Catholic Church in 1995.  In 1997 he was sent by Cardinal Hume to study for the priesthood at the Beda College in Rome.  He was ordained as a deacon at St Paul’s outside the Walls, Rome, in May 2000 and as a priest on 21 July 2001 at St Paul’s, Wood Green, London.  Fr. Shaun’s first appointment was as Assistant Priest at St Mary and St Andrew, Dollis Hill from 2001 until 2004.  His second appointment was as Assistant Priest at St Monica’s, Palmers Green from 2004 until 2007.  In September 2007 Fr. Shaun took up his first appointment as Parish Priest, at Our Lady of the Holy Souls, Kensal New Town.  During his six years as Parish Parish Priest there Fr.  Shaun undertook a major restoration of that beautiful Victorian church, designed by Bentley, culminating in the consecration of the church on 10th November 2012.  In September 2013 Fr. Shaun was appointed as Parish Priest of the parishes of Our Lady help of Christians, Rickmansworth and St John Fisher, Chorleywood.  In November of the same year he also became Parish Priest of St John the Evangelist, Mill End and Maple Cross and now serves all three parishes. 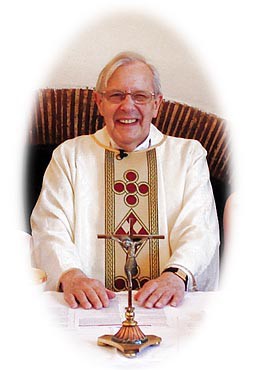 James Henry Brand was born on 8 June 1935, the only son and eldest child of a family living in Crowborough, East Sussex. He had three sisters: Alison who lives in London, Marion who died of cancer at the early age of 42, and Monica who is married to an Italian and lives in Rome. The young Jim was educated by the Jesuits and sent off to boarding school at the age of eight, at first to St John’s Beaumont and then to Stonyhurst. On leaving school, he completed two years’ National Service, the time spent mostly in Germany, before entering the Allen Hall seminary in Chelsea. After further study in Rome, Father Jim was ordained in July 1964 and said his first Mass at the English College Villa in Rome, an occasion attended by a large gathering of family and friends.

Father Jim’s first parish was St Charles Borromeo in Ogle Stree (close to the Post Office Tower). Whilst there he was chaplain to the Middlesex Hospital and would tell us how he put his Italian to the test in the maternity ward. He returned to Allen Hall as Spiritual Director for several years, he ran the All Saints Pastoral Centre at London Colney for a while and then became parish priest at Our Lady and St Michael, Garston. He was there for ten years and was proud to have built a large new church hall for a thriving parish. During that time he brought his widowed mother to live with him before she needed to go into a nursing home. In 2000, he left to become Spiritual Director at the Beda College in Rome, training mature students for the priesthood. In that time he started broadcasting homilies on Vatican Radio. Many of these talks are still available on the Vatican Radio website.

After a short time at St Michael Ashford, Middlesex, Father Jim came to St John Fisher in Chorleywood in autumn 2008. He brought with him his many talents. He was the most articulate and eloquent speaker, with a charming turn of phrase, so that his homilies were captivating and inspiring. He loved classical music, especially Beethoven, Mozart and Handel. He was himself a most accomplished pianist and had played as an accompanist at the Wigmore Hall. It is said that he could have pursued a career as a concert pianist. Instead he followed his vocation to the priesthood, one that would last almost 49 years. At Mass he would often accompany hymns on the piano and gave lively recitals at parish social events, mixing classical pieces with popular music for singing along.

The garden at Chorleywood became a blaze of colour as Father Jim took charge with his amazing green fingers, growing vegetables and flowers. For a small charge, he offered young plants he had grown from seed to parishioners and gave the money to charity. He was an expert cook and loved to host deanery lunches and offer home-made refreshments at meetings and social events. Delicious soups were always available at Lenten and Advent courses, and his Victoria sponges were wonderful. He believed in good hospitality.

Father Jim suffered from painful arthritis and was prone to chest infections. Throughout his long illness with lung cancer he never lost his interest in the parish, world affairs and all around him. He retained his infectious sense of humour and somehow even managed to see the funny side of things during the countless hospital visits.

Father Jim died on 27 March 2013 in the special care of The Peace Hospice in Watford. May he rest in peace. 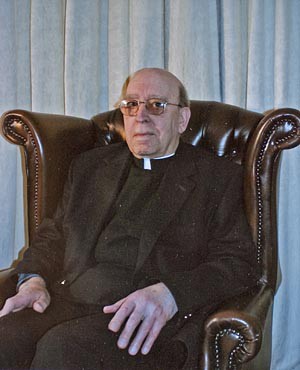 Father Peter Stevens was born in 1931 in Ealing and attended St Joseph’s Salvatorian College, Harrow Weald. He first answered the call to the priesthood in 1949, when he was seventeen, but a year later left the seminary, Campion House, following the tragic early death of his brother. At that time he believed he would never become a priest. Thirty-four years later, after National Service in the RAF and a career in sales management, he was sent by Cardinal Hume to study for the priesthood at the Beda College in Rome. He was finally ordained in Westminster Cathedral in 1989.

Father Peter served at St Scholastica at Clapton, near Hackney, and at Holy Trinity, Brook Green, before coming to Chorleywood in 1994. He was our very caring and most efficient Parish Priest until his retirement, aged 75. Fr Peter moved to a flat in Ruislip and for several years provided assistance at the church of the Most Sacred Heart. He is now being looked after in St Anne’s Care Home in Stoke Newington. Despite poor health, he remains in contact with several parish members. 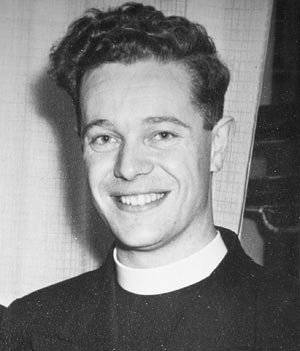 Father Ronald Cox was born in 1928 in South Africa, but came to England and completed his education at St Edmund’s College, Ware. He studied for the priesthood at the English College in Rome and was ordained there in 1953. He moved around a great deal during the forty years of his priesthood, serving at Westminster Cathedral, two churches in central London, then parishes in Hendon, Harrow and Hatfield. Sadly, he suffered from cancer and was relieved of the more onerous duties of a larger parish by moving to Chorleywood.

With great courage Father Cox continued in his duties as Parish Priest right up to his final illness. He died aged 65 in April 1994 at Michael Sobell House. He had been visited and given a blessing by Cardinal Basil Hume on the previous day. The Cardinal was the Principal Celebrant at the funeral Mass held at Our Lady Help of Christians in Rickmansworth. Large numbers of the clergy and our parishioners attended the Mass. 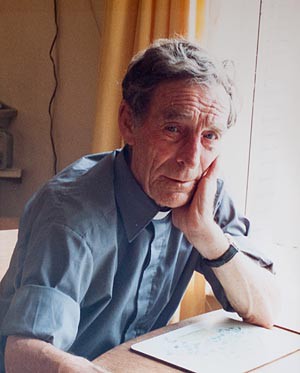 Canon Britt-Compton had many interests, notably carpentry. The room next to the lounge became his workshop and at one time he held very popular woodwork classes for boys in the parish. He made the outside notice board and other items still in use at St John Fisher, as well as cribs and other items for sale at our Christmas Fair. He also loved gardening and was an enthusiastic supporter of the Christian Aid plant sale. He made many friends in the wider Chorleywood community.

In 1989, Canon Britt-Compton offered his resignation to the Cardinal, two years late at the age of 77, and in his 50th anniversary year of the priesthood. He seemed genuinely surprised and somewhat sad when it was accepted. After leaving Chorleywood, Canon served for several years as Chaplain at St Mary’s Convent School, Shaftesbury. He eventually retired to Kent to be near his twin sister and his youngest sister and her family. His last years were at Nazareth House, East Finchley where he died in May 2002, aged 89. Canon Britt-Compton is to date our longest serving Parish Priest, having dedicated himself to the task with great energy and commitment for all of his nineteen years in Chorleywood. 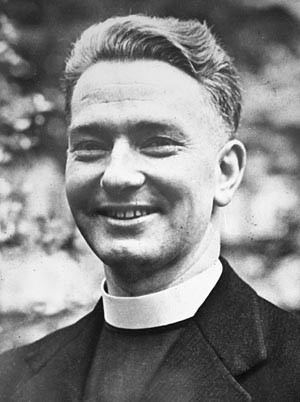 Father Alexander Wells, came to us from St Edmund’s College, Ware, where he had been Master of Music, as well as teaching carpentry and acting as Spiritual Director to the boys. At this time, the financial affairs of the Parish were at a low ebb and for a time it seemed that we might be unable to support a priest at all. Hill Cottage was in need of many repairs. The parishioners rallied round and we were able to support Fr Wells, as well as a housekeeper who lived in the house with her daughter.

Sadly, after only four years in Chorleywood, Father Wells died suddenly on New Year’s Day 1970, at the age of only 57. The organ at St John Fisher was purchased as a memorial to Father Wells, paid for by generous donations from parishioners and also from non-Catholic friends. 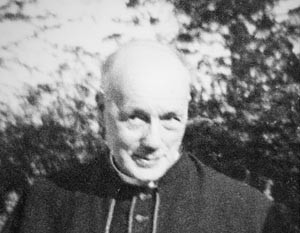 In August 1962, Canon Clement Parsons was appointed our first Parish Priest. He came to Chorleywood shortly after his retirement as headmaster of Finchley Catholic Grammar School which he had founded in 1926 with 18 boys. The school had 1,100 pupils when he left. He worked hard in the parish and was responsible for acquiring our Stations of the Cross and the statues of St John Fisher and the Holy Family.

In March 1966, Canon Parsons returned to St Edmund’s College, where he continued with part-time teaching for many years until prevented by ill-health. Cardinal Basil Hume officiated at his Requiem Mass in Westminster Cathedral in March 1980.