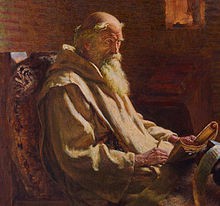 Bede (672/673 – 26 May 735), also referred to as Saint Bede or the Venerable Bede, was an English monk at the Northumbrian monastery of Saint Peter at Monkwearmouth and of its companion monastery, Saint Paul’s, in modern Jarrow, Northeast England both being located in what was the Kingdom of Northumbria. He is well known as an author and scholar, and his most famous work, The Ecclesiastical History of the English People, gained him the title “The Father of English History”.

In 1899, Bede was made a Doctor of the Church by Leo XIII, a position of theological significance; he is the only native of Great Britain to achieve this designation (Anselm of Canterbury, also a Doctor of the Church, was originally from Italy). Bede was moreover a skilled linguist and translator, and his work with the Latin and Greek writings of the early Church Fathers contributed significantly to English Christianity, making the writings much more accessible to his fellow Anglo-Saxons. Bede’s monastery had access to a superb library which included works by Eusebius and Orosius among many others.