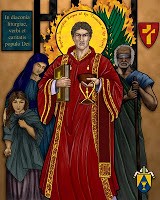 St. Lawrence was born at Huesca, Spain around 225 A.D. Little is known about his early life.

He held the post of Roman archdeacon under Pope St. Sixtus II. Emperor Valerian ruled the Roman Empire during Sixtus’ pontificate, and executed a harsh persecution of Christians.

Pope St. Sixtus II was arrested on the orders of Valerian while he was celebrating Mass in the Cemetery of Praetextatus. When St. Lawrence became aware of this, he immediately rushed to the Pope’s side crying, “Where are you going, father, without your son? Where are you going, O priest, without your deacon?” The Pope replied, “My son, you I am not abandoning. Greater strife awaits you. Stop weeping; you will follow me in three days.” 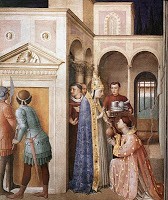 Following the execution of the Pope and six other deacons Lawrence was left as the ranking Church official. One of his roles as Roman archdeacon was “keeper of the treasures of the Church.” Lawrence used his last three days to disperse what material wealth the Church had amongst the poor of Rome. On August 10 Lawrence was commanded to appear before the Prefect of Rome and bring with him the wealth of the Church. St. Lawrence brought to the Prefect all the beggars he could find on the Roman streets, presenting them as the Church’s treasure.

For his insolence, Lawrence was sentenced to be slowly and painfully roasted to death. He was lain on a large, scorching grill where he was to be left until dead. After a period of time St. Lawrence requested that the executioner turn him over, for he was quite well done on that side.

St. Lawrence passed away on August 10, 258. He is buried in the cemetery of Saint Cyriaca in Italy and the grill on which he was killed is kept in San Lorenzo in Lucina.

He is the patron saint: against fire; against lumbago; of archives; of armouries; of armourers; of brewers; of butchers; of chefs; of comedians; of comics; of confectioners; of cooks; of cutlers; of deacons; of glaziers; of laundry workers; of librarians; of libraries; of paupers; of poor people; of restauranteurs; of schoolchildren; of seminarians; of stained glass workers; of students; of tanners; of vine growers; of vintners; of wine makers; and of multiple towns and dioceses.