In July 1908 Father William Bendon arrived at a small suburb in London. It’s name was Golders Green! There were watercress beds at Henley’s corner and very few shops in Temple Fortune. Trams ran passed the site of the present church between North Finchley and Golders Green.

The arrival of Fr Bendon in Golders Green coincided with the development of the Hampstead Garden Suburb which was to be part of the Parish.

The Beginnings of the Parish

The Carmelite sisters had arrived from Isleworth and the Chapel in their Monastery in Bridge Lane was used as a Mass centre by local Catholics since the nearest Catholic Church was St Mary’s East Finchley. (The parish of St Philips at Finchley was not founded until 1919). Fr Bendon resided at Heriot House, Golders Green Road and was Chaplain to the Carmelite Sisters. The site for the Mission had already been acquired in July 1909 and on September 8th, Our Lady’s birthday, the first sod of turf was cut and the building of the Presbytery commenced.

The new parish was dedicated to St Edward the Confessor because the land on which the new church was to rise was given by St Edward to the Benedictines for religious purposes when it was part of the parish of Hendon.

The Mission of St Edward the Confessor was opened on Christmas Day 1909 when two Masses were said by Father Bendon, the First Parish Priest in what is now Fr Helm’s office in the Presbytery, and 50 people were present.

Mass was said on each Sunday at 8 and 10 after the first Christmas morning, and Fr Bendon moved into the new house on January 22nd 1910.

It was soon evident that the temporary Chapel would be too small and many of the congregation heard Mass, weather permitting, on the grass outside the Presbytery, or even kneeling on the stairs leading up to the first floor of the house.

“The Universe” of the day describes the scene 13 October 1910 as follows:

“Few outlying missions in the north of London are more interesting than that now in course of development at Golders Green where Father Bendon is so successfully and zealously fostering the ultimate establishment of a thriving Catholic Church in a neighbourhood that hitherto has been destitute of Catholic privileges. At present, the services are carried out in a room adjoining the modest Presbytery in Finchley Road, and here it was that last week, the feast of St Edward the Confessor, the patron Saint of the new church, was solemnised. The tiny sanctuary hardly lends itself to big functions, yet it is beautifully kept and was most exquisitely decorated for the occasion, and the High Mass on Thursday was faithfully and reverently performed in spite of the many drawbacks imposed by lack of space”. October 1910. 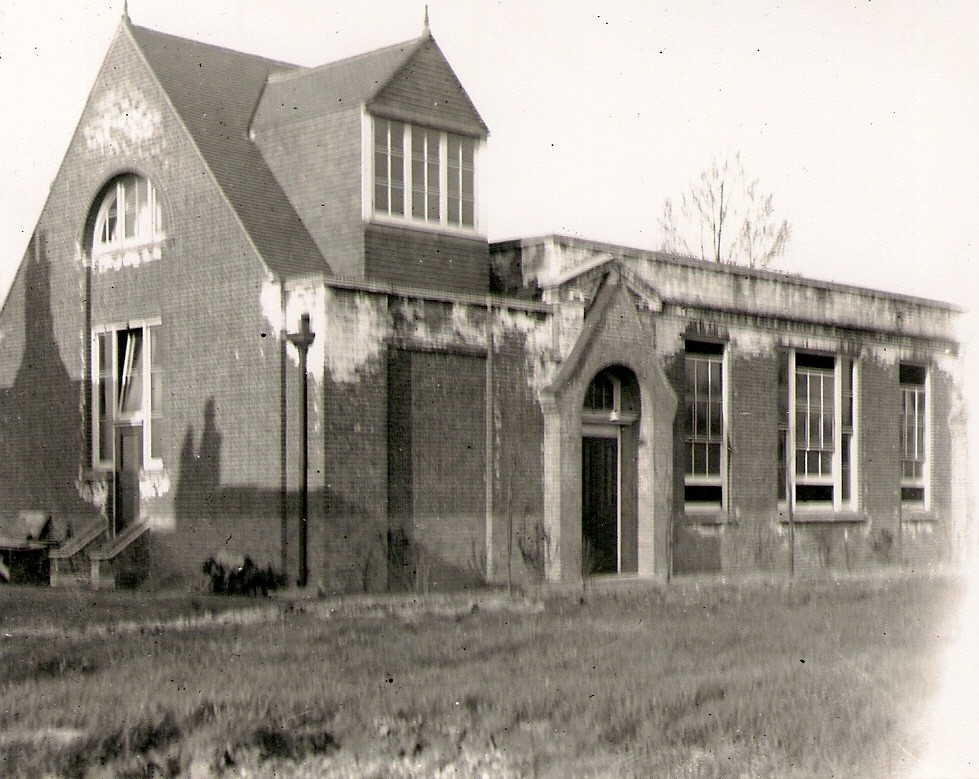 A larger building was soon decided upon, and St Edward’s Hall was built in 1911 to accommodate 300 people at a cost of £1,000. The building was opened as the second Chapel on Whit-Sunday, June 4th 1911 and used as the temporary Church until the present Church was completed. The Sanctuary and sacristy where the club room is now, and choir were at the back of the Hall where the present stage is located. The entrance was from Hoop Lane. The times of the Masses on Sundays were 8.00, 10.00 and 11.00 am with Benediction at 5.00 pm. The picture on the right shows the Hall shortly after its completion.

The Mission was fortunate in having only a very small debt, only £395 left on the Hall representing its liabilities after a floral Bazaar held in the previous May. When this debt was cleared in November 1912 the late Father Bendon promised to start the new Church when the sum of £2,000 was in the Bank.

This was achieved towards the end of 1913, and Fr Bendon, who had been occupied for three years on the plans, commenced the new Church on March 25th 1914, the Feast of the Annunciation, when His Eminence the late Cardinal Bourne laid the foundation stone . 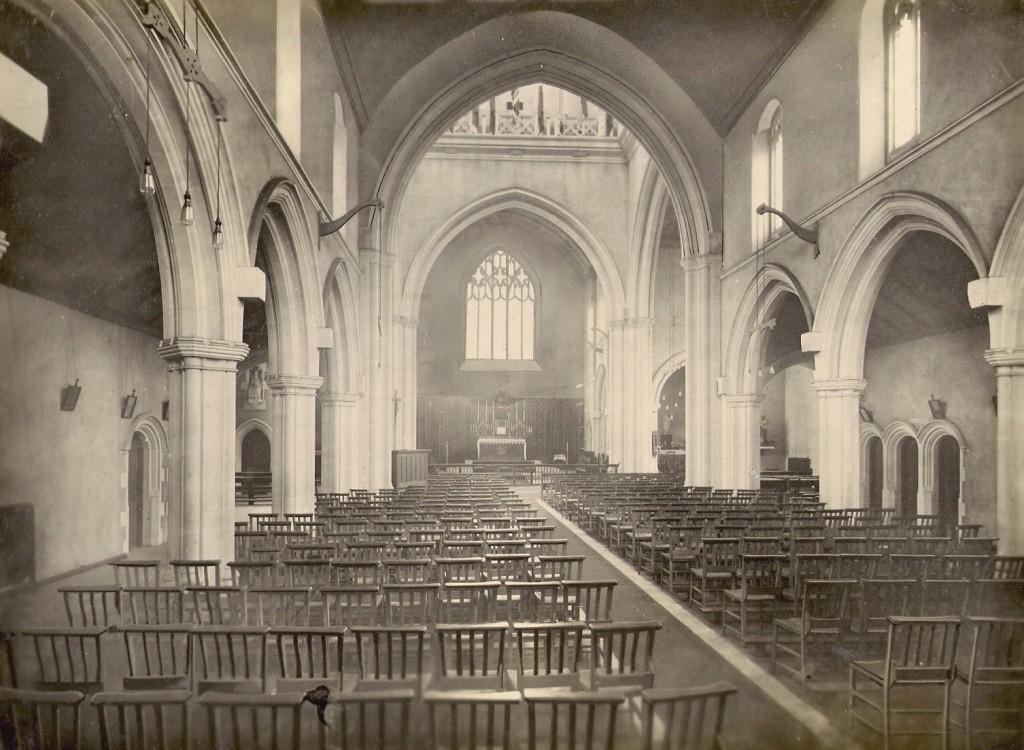 The First World war was declared on August 4th 1914, and the building of the Church was carried on under the greatest difficulties and with unavoidable delays. Nothing but the goodwill and courage of the contractors, urged on by Fr Bendon enabled its completion.

The first date for the opening, September 8th 1915, the night of the first Zeppelin raid over Golder’s Green, had to be changed, and the Church was eventually opened on the Feast of St Edward the Confessor, October 13th, by the late Cardinal Bourne, after the first Mass had been said privately by the late Father Bendon.

The picture on the left shows the interior of the Church in 1915. Its cost to the congregation was £10,000.

Cardinal Bourne speaking at the end of the High Mass on the opening day, congratulated the late Fr. Bendon, the architect and all the others who had been associated with the raising of the splendid Church.

He spoke of the late Fr. Bendon’s courage and zeal in achieving his work in spite of uncertain health, and exhorted the congregation to assist loyally in meeting the interest on the debt which rested on the Mission and lessen the debtas rapidly as possible.

Architecture had been one of the late Fr. Bendon’s studies, and in devoting himself to this work he sought to attain those aspirations which a Church should embody – beauty, strength, an atmosphere of worship, and the idealism of its sacred purpose. The style of architecture of the building is perpendicular Gothic, and the ideal has been the old pre-reformation Parish Church.

The late Fr. Bendon found a kindred spirit in Mr Author Young, the architect, and the result to be seen in the completed building is one that has already created more than a mere passing impression. The main feature of the church is the lantern tower which rises to a height of almost 80 feet. The tower is 27 feet square and rises on 4 massive columns from the nave.

Even those who confess to no particular architectural taste were conscious of some compelling attraction which led them to take more than a cursory glance at the new building, and many visitors, including a large number of ministers of other communions inspected the building with evident interest and pleasure.

The Parish will always be greatly indebted to Fr Bendon who suffered considerably from ill health during his time as Rector of the Parish and spent the latter years of this life in a wheelchair. His hair was red, his complexion fresh and highly coloured. He had a heart condition and was destined to die young, but in the short time allotted to him he accomplished much.

Although an invalid he radiated dynamic energy and zeal. He used to lie on a couch in a room with french windows (now Fr Helm’s dining room). Fr Bendon was assisted by Fr Louis Hemy who was a small, fair haired person, very charming and kind. He spent all the seven years of his priesthood at St Edward’s and tragically died at the age of 33 in the 1918 flu epidemic.

The stained glass window dedicated to St Louis and St Joseph is in memory of Fr. Hemy.

Fr. Bendon, died on December 21st 1920, and was buried in Finchley Cemetery. He was later re-interred in a special grave outside the church, over which was placed an inscribed stone, erected by the parishioners.

A brass tablet, in the church close by St Edwards Shrine,was also erected by the parishioners, telling of his place of burial and stating that the beautiful stone altar and magnificent reredos had been erected in his memory.

Fr Bendon was succeeded for a short time by Dr. Ambrose O’Gorman, who acted as Administrator, until Canon Charles Simms, formerly Parish Priest at Wapping, was appointed in October 1922.

Consecration of the Church

The church was finally cleared of debt and was Consecrated by Bishop Butt on the Feast of St Edward 1930. In celebration of the 25th Anniversary of the founding of the parish the ten statues of English Saints and Beati (who were later Canonised ) the work of Lindsay Clark were placed in the niches of the reredos.

Together with the choir stalls donated by parishioners this completed the memorial to Fr Bendon.

Canon Simms retired in January 1943 and was succeeded by Canon James Thornton who had been Parish Priest at Hertford. Although bombs fell all around, St Edward’s, despite its tower which dominates the local skyline, was spared any destruction during the second world war.

The memorial window over the High Altar was installed by Canon Thornton and the Parishioners in 1947 in thanksgiving for the safe deliverance of the Church and for the heroism of a former parishioner Captain Michael Allmand who was awarded the Victoria Cross for his heroism in the Far East.

Canon Thornton died in November 1961. His successor was Fr de Felice, no stranger to the district, having been a curate at Hendon for many years and was formerly parish priest at Swiss Cottage. In the late 1960s arson destroyed the sacristy and smoke severely damaged the interior of the church.

A new sacristy was built and the Church was restored to its former beauty. Fr de Felice was also responsible for the installation of the magnificent stained glass window in honour of St Theresa, St Thomas More and St John the Apostle.

Ill health forced the retirement of Fr de Felice in 1976 when he was succeeded by Fr Andrew Morley who remained as parish priest until 1984.

He was succeeded by Fr John Helm, formerly parish priest at Harefield. The Comboni Missionaries ( formerly the Verona Fathers ) and many of their students , now missionaries all over the world, assisted Fr de Felice in the parish and shared in the life of the parish for almost 40years until they moved from Elstree. Fr Helm was succeeded by the present Parish Priest Fr Tony Convery in 2013.

There have been many have improvements to the Church and Hall over the past twenty years including a foyer between the hall and sacristy and an extension to the Hall opened by the then Bishop Vincent Nichols in 1994.