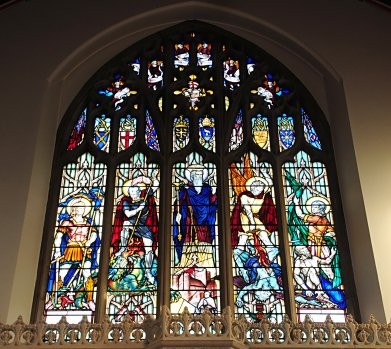 The magnificent Stained Glass Window was made by Hendra & Harper In 1947, and installed by Canon Thornton.

It was the gift of the parishioners, in thanksgiving for the safe deliverance of the church, and to commemorate the heroism of a former parishioner Captain Michael who was posthumously awarded the Victoria Cross in 1943 for his heroism in the Far East. Taking its proper place as the main feature of interest in the tracery is a symbolic representation of the Crucifixion portrayed by the Lamb of God carrying the banner bearing a red cross and standing upon the Book with seven Seals (Apoc V).

Surrounding the centre piece is a scroll held by Angels upon which is written the most significant exhortation concerning Sacrifice. The colour and placing of the Angels and scroll are designed to give firmness to the general lines of the whole composition.

In the main lights and lower traceries the background is formed by a light Gothic screen, reflecting the style of the reredos below and the general character of the church. This ensures that the subject matter which moves from one light to another (eg the tail of the dragon, etc) does not detract from the architectural effect of the mullions. On this background the main figure are placed in such a way as to enhance the main shape of the whole window, from the swinging of the arch particularly.

In the centre light of the window is placed the figure of St Edward the Confessor, the Patron Saint of the church, bearing his sceptre and ring. Below the figure is depicted the church which is illuminated to the front and rear by the flashes of bomb explosions demonstrating its remarkable preservation from destruction. It is to be noted that each explosion is tinged with evil, by the dragon’s claw on the one side and the wing of Lucifer on the other.

In front of the church is a portrait of Canon Charles Sims in full canonicals, commemorating his devotion to this parish.

Crowning the centre light in the lower tracery are the arms of St Edward and of Pope Pius XII. Supporting the centre light on the right is the Archangel Michael casting Lucifer from Heaven, the flaming sword in his right hand and his left pointing to his shield which bears the inscription “Quis et Deus? – Who is like to God?”

On the left is St George subduing evil represented by the dragon; shown in the tracery above the figure is a shield bearing the cross of St George. Both these lights are thus concerned with action forming an effective contrast to the dignity of the centre figure of St Edward.

It is appropriate that the courage of the individual parishioners of this parish should be symbolised in these two lights by the magnificent example of Captain Michael Allmand, VC. His action is commemorated beneath St George by the badge of his regiment (6th Lancers) and below St Michael by the badge of the Ghurka regiment (showing the crossed kukri) to which he was attached when he won the Victoria Cross, the later being superimposed upon the badge.

Above the simple inscription in the outside lights are the solider saints, St Alban on the left and St Martin on the right. Above each of these in the lower traceries are their arms. The figure of St Alban by his bearing alone suggests the glorious example he set and his example is equally well suggested in the action of St Martin dividing his cloak with a beggar.

To complete the whole scheme the remaining tracery lights are filled by the flags of the Services.

A description by the late Audrey Knighton.

Captain Michael Allmand lived in North Square in the Garden Suburb with his family. He was educated at Ampleforth College and Oxford where he studied history from 1941 until he end of 1942 when he joined the 6th Lancers Regiment of the Indian Armoured Corps.

Three months later after the fall of Singapore, he was sent to India where he volunteered for the Chindits under General Wingate. He was accepted because of his character (described as gentle, dynamic, full of life with a charisma), and was attached to the 3rd Battalion of the Ghurka Regiment under “Mad Mike Calvert”.

Captain Allmand (then 20 years old) was commanding the leading platoon in Burma on 11 June 1944 when he was ordered to attack the Pin Hmi Road Bridge.

His men were forced to take cover from fire directed from Japanese positions along the road-bank and in the surrounding jungle. He dashed on alone, killing three of the enemy with grenades and his kukri – opening the way for advance, which resulted in the capture of the bridge. The Captain inspired his men again by similar behaviour two days later, and on 23 June he led them in the final assault on the Mogaung Railway Bridge.

Though suffering from the intensely painful affliction of trench-foot, so that walking was difficult, he worked his way forward to deal with a machine-gun post – and fell mortally wounded.

The Victoria Cross was presented to his family by King George VI and is now in the Ghurka Museum.