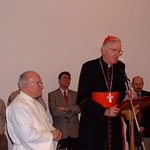 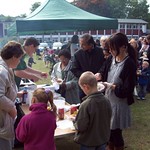 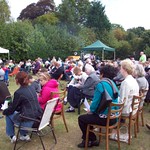 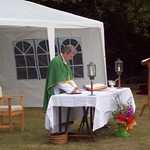 Following a very successful publicity campaign this first time event was a 100 ticket sell out well before the night – we even had a waiting list, which enabled us to reallocate returned tickets at the last minute.

The event was the brainchild of Jojy Paul, an SMJ parishioner who is a leading member of the Malayalam (Indian) community in Hemel Hempstead. This community wanted to play their part in the parish’s Building Fund fundraising activities as they hold a regular (monthly) afternoon Mass at St Mary and St Joseph’s  which is well attended by their local community and visitors from across the UK.

Once everyone had arrived and settled down at the beautifully decorated tables, they were welcomed and then 17 yr old Aathira Jojy gave a brief presentation. This included details of the Malayalam’s Southern Indian origins, their conversion to Roman Catholicism following the visit to India in 52 A.D of St Thomas and the present day activities of the UK based members.

There are approximately 40 Malayalam families in Hemel. Aathira spoke very confidently until faced with Geoff’s cricketing question about the 2014 Test Match series result (England beat India 3-1.) Perhaps it was a selective memory loss! (Not fair Geoff says the editor!).

The Malayalam young girls/teenagers then demonstrated a range of traditional dances. To say that this added the ‘wow’ factor to the evening is an understatement as the swirling movement, colourful costumes and Indian music captivated the audience who applauded and cheered the performance at its end. Tilly Lee (one of the SMJ youngsters) presented them with a small individual gift to thank them for a truly memorable display.

By now, everyone was starving as the exotic smells wafting from the kitchen increased. A wonderful menu consisting of a variety of starters and main courses proved highly popular, with well known ‘big eaters’ going back for ‘seconds’ and allegedly ‘thirds’ in one case!! A cooling dessert of Gulab Jam and ice cream was the perfect antidote to the hot curry–together with plenty of liquid refreshment and a selection of traditional teas and coffee. This completed a superb meal all cooked by Jojy’s brother and master chef, Robin.

The dancing and meal all contributed to a wonderfully friendly atmosphere with people from all 4 parishes and the Malayalam community mixing easily and creating an ideal opportunity for our raffle ticket sellers to ‘make hay’!

The prize table was ‘groaning’ with the weight of a great array of attractive prizes. £272 worth of tickets were sold. Our grateful thanks to all who sent prizes, including three local Boxmoor businesses: the Sitar Indian Restaurant, Richard Brown Hair Stylist and ‘Vijay’ the owner of the new convenience store next to SMJ which opens in mid October.

Father John called in and ‘worked the tables’ in his inimitable style and Fr Derek sent his apologies as he had the flu which he promised he wouldn’t share with us!

Geoff thanked one and all for their support with a  special mention for the SMJ Fundraising Committee ‘heroes’, DJ Monty McShane, chef Robin and , of course, the dancers! Thanks to the very generous contribution of all the food by the Malayalam community the event had raised a staggering £1040 for the Building Fund.

Hopefully there will be similar events in the future, reflecting the diversity of nationalities who collectively make up the Catholic population of the four Hemel parishes.