Please check this website before you set out for Mass, just in case the Mass has been cancelled. You can check by going to the STOP PRESS! page. 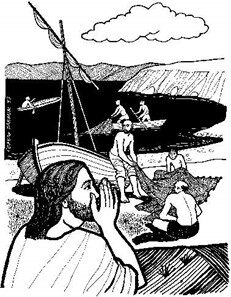 Most of the Gospel readings in Year B of the Lectionary, are taken from the Gospel according to Mark. I’m sure you’ve read that Gospel through? If not, why not!? There’s not much else to do during the lockdown. Read it and enjoy it as if you were reading an action story. It’s shot through with two major themes, discipleship and suffering. It also highlights in the early stages what I would argue if the key ministry that Jesus demonstrates in the Gospels and that is the ministry of exorcism, casting out demons thus setting people free from the snares of the devil. 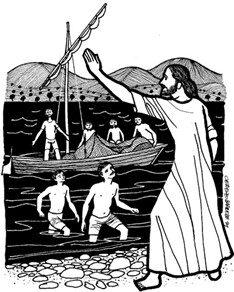 Like John the Baptist, Jesus’ pronouncement of the kingdom is a call to repentance. Yet his is greater than John’s. Jesus begins the time of fulfilment; the Kingdom of God is already here. This will be demonstrated again and again, both in Jesus’ words and in the actions that follow. Jesus’ healings and forgiveness of sins are signs of the Kingdom of God that he announces in his teaching.  Jesus takes the initiative in calling his first disciples, unlike last week when they followed him seemingly out of curiosity and typical of first-century rabbinical schools for students to seek out rabbis, asking to be their disciples.

In Mark’s Gospel, Jesus breaks with this tradition and invites his disciples to learn from him. Jesus is said to have first called four fishermen—Simon, Andrew, James, and John. Simon and Andrew are brothers. Jesus promises that he will make them “fishers of men.” A bit of humour there on the part of Jesus! James and John are also brothers. Mark does not report Jesus’ words of invitation to them, but he does report that they left their fishing immediately; their father, Zebedee, was left behind in the boat. I can imagine the look on their father’s face!

Mark’s Gospel is told with a great sense of urgency and immediacy. Jesus is a person of action, and events occur in rapid succession. We see this in today’s Gospel. Time is of the essence; the fishermen immediately put aside their livelihood to become Jesus’ disciples. The Kingdom of God is here and now. The time of fulfilment is at hand. How might our parish be different if we more fully shared this sense of the immediacy of God’s kingdom?

Reminder: Do remember to keep an eye on the parish website, as with the increased numbers of funerals and burials that I have to take, weekday Masses may have to be cancelled to accommodate them. Best to check before you come to Mass. I currently have nine funerals in a very short space of time. I know that you will offer up prayers for the repose of their souls. May they all rest in peace and rise in glory.