During the period of the suspension of the Sunday obligation, five Masses are offered during the course of the week, including the option of participating via live stream.

The Sacrament of Reconciliation (confession) is celebrated on Friday evenings, 7pm to 7.30pm in the presbytery. A screen will be in place to facilitate penitent anonymity. As always, confessions can be heard on request. Jesus will be waiting for you - come! 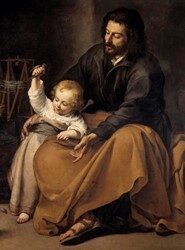 The Year of St. Joseph.

The Year of St. Joseph

The Pope has dedicated this year to St. Joseph and, as he is one of our patronal saints in Hemel West, maybe we should try to get to know him a little better.  The recent Apostolic Letter, Patris Corde (With a Father’s Heart), is a personal reflection by  Pope Francis on the importance of St. Joseph in our world of today –  as the husband of Mary, the father of Jesus and the protector of the Church.

In this slim volume (a mere 32 pages) Pope Francis invites us to better get to know this often overlooked saint.  The aim is to ‘increase our love for this great saint, to encourage us to implore his intercession and to imitate his virtue and zeal’.  Scripture tells us very little about Joseph but we do know that he was a carpenter; that he was a kind and devout man; that he took on the role of protector and legal father to Mary’s son, and with her, enabled Jesus to grow in wisdom and knowledge.  The Pope compares Joseph to the many unsung and hidden heroines and heroes of the current pandemic – those who serve, often in quiet, unobtrusive and everyday ways.  Their contribution is often overlooked  but without them  the world would be a harsher and poorer place.  He writes, ‘Each of us can discover in Joseph – the man who goes unnoticed, a daily discreet presence – an intercessor, a support and a guide in times of trouble.’

The Pope devotes seven short sections to aspects of Joseph’s fatherhood: he was an accepting, obedient, and loving father; he was courageous and resourceful; he was a working father; he remained in the shadows – his influence on Jesus is not overtly mentioned in the scriptures but we can see it in the humanity of his foster son.  The Pope says, ‘I like to think that it was from Saint Joseph that Jesus drew inspiration for the parable of the prodigal son and the merciful father’.  Joseph offers a pattern of fatherhood to be emulated.

In Spain, Italy and Portugal, Father’s Day is traditionally celebrated on 19th March – the feast of St.  Joseph.  And his other feast on May 2nd celebrates him as patron of workers.  There is no doubt about St. Joseph’s position as a key worker!  There is a link to the Novena to St. Joseph on the parish website.  The prayer below is from the conclusion of the Pope’s letter.

Patris Corde costs £3.95 and is available from the Catholic Truth Society. Or you can read it online here:

Hail, Guardian of the Redeemer
Spouse of the Blessed Virgin Mary
To you God entrusted his only Son;
In you Mary put her trust;
With you Christ became a man.

Blessed Joseph, to us too
Show yourself a father
And guide us on the path of life.
Obtain for us grace, mercy and courage
And defend us from every evil.   Amen