Who is St Hilda of Whitby?

Hilda of Whitby (614-680) is a Christian saint who was an important figure in the Christianisation of Anglo-Saxon England.

“All who knew Hild, the handmaiden of Christ and abbess, used to call her mother because of her outstanding devotion and grace. She was not only an example of holy life to all who were in the monastery but she also provided an opportunity for salvation and repentance to many who lived far away and who heard the happy story of her industry and virtue.”  Bede [1] 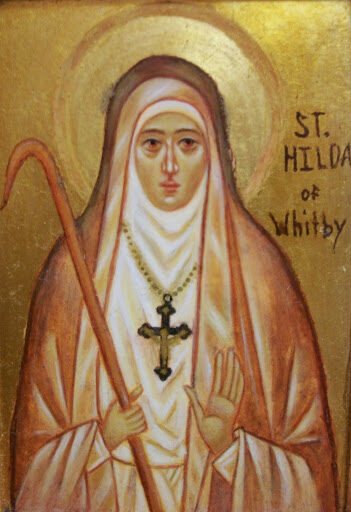 By birth, Hilda was part of the nobility  – niece to the Northumbrian King Edwin of Deira (r. 616-633 CE).  The Northumbrian court converted from paganism to the traditions of Roman Christianity in approximately 627 CE.  After this, many years of unrest and war (from Mercia at its borders, and Wessex in the south) resulted in Hilda – along with her sister and mother – seeking exile in Kent.  Documented by Bede again, the kingdom of Kent followed the Roman Christianity traditions.  Although Hilda’s education is not documented, Bede does record her sister’s education which took place at a nunnery.  It is generally assumed that Hilda also benefitted from this.

Recognition from Aidan of Lindisfarne

In 634 CE, Oswald inherited the Kingdom of Northumbria.  As a young exile on the island of Iona, he was raised in the Ionan Christian tradition (established by St Columba in approx 563 CE).  He chose to invite the monastery of Iona to send  missionary monks to bring the Northumbrian people – and beyond – back to the “ways of truth” over missionary monks from a Roman Christian tradition.  The missionary group was led by Aidan – who is commonly known as Aidan of Lindisfarne.  Following correspondence with Aidan, Hilda found herself being drawn to the Ionan practice tradition, under his supervision .  She answered Aidan’s call in 647 CE to return to Northumbria to establish a convent along the north bank of the River Wear.   She was 33 years old.  In 649 CE she was appointed at Abbess of Hartlepool Abbey where her philosophy embraced devotion to justice, divine love, peace and harmony. 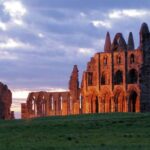 Hilda’s reputation for sound wisdom and virtue gained her recognition with royalty and nobles of the time irrespective of which tradition their royal house followed.  The Northumbrian King Oswiu entrusted her with the raising and education of his daughter within the Ionan practice tradition – high recognition indeed!  In 657 CE the King gifted Hilda some land at Streonshalh (Streanæshalch), which is now known as Whitby in North Yorkshire. There she founded the famous monastery.

It was dedicated to development in and practice of Ionan traditions; it housed a library where the Sacred Scriptures were studied and provided education for both men and women. Several of those who studied there went on to  hold important roles within the Roman Catholic Church in the 7th and 8th centuries.  It was a double monastery for both monks and nuns, made of wood and thatch – replaced centuries later by the stone Benedictine Abbey.

The Synod of Whitby

In 664 CE, the Synod of Whitby, convened by King Oswiu was held at the monastery.  It was one of the most influential synods held during the Christianisation of Anglo-Saxon England as its outcomes defined the path for the development of Christianity including but not limited to the relationship with continental churches on the main continent.

Despite most of the northern territory in Anglo-Saxon Britain following the Ionan Christian tradition and were represented by Hilda, some bishops and some royalty, the outcome of the Synod fell in favour of the Roman Christian tradition because both sides agreed that Peter had been given the keys to the kingdom of heaven by Christ and was pronounced to be “the rock” on which the Church would be built (Matthew 16:18-19).  King Oswui declared his judgment in favour of the holder of the keys, i.e. the Roman (and Petrine) Christian practice.

After this agreement, Hilda was an advocate for the Roman Christian tradition and this was incorporated into the lifecycle and activities of the monasteries in Whitby.  According to Thurston [2](1910), Bede described Hilda as a skilled administrator and teacher with great energy.  She was an employer for locals in farming, shepherding and other husbandry tasks.  When she recognised an individual with a gift, she actively encouraged development and growth in it. Bede writes, “All who knew her called her mother because of her outstanding devotion and grace”.

Hilda died in 680 CE after several years of ill health. She was 66 years of age.  Hilda was buried at Whitby and was succeeded as abbess by Aelflaed – the daughter of King Oswiu. Her piety was praised by contemporaries such as Bede and Stephen of Ripon. Bede refers to her high degree of holiness and devotion, while Stephen calls her the consoler of the whole kingdom and the best counsellor. She followed Hilda’s example so closely that she was also sainted and was known for extraordinary medical skills alongside piety and holiness.

Local folklore in Whitby credits St Hilda with ridding Whitby of snakes by hurling them from the top of the Abbey Cliff and that on landing, they turned to stone as a result of her anger.  The legend gained further growth when spiral fossil molluscs – ammonites – were found in the rocks of the cliff. This anecdote is pure myth but in 1876, Victorian geologist – Alpheus Hyatt – named a species (found in the fossils dating from the Jurassic period) in Hilda’s memory – Ammonite hildoceras. 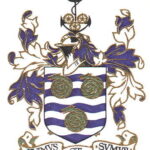 The arms show three curled snakes (previously shown as ammonites). According to legend, Hilda rounded up the serpents that swarmed around the abbey. She hurled them from the cliffs, where they lost their heads and turned into stones. The ammonites are 190 million-year-old fossils, which can be found in the area.

To find out more information about the early Christianisation of Anglo-Saxon kingdoms, click here.

A simple timeline for this is available here.

Much of the [almost] contemporary information about her was written by Bede as he documented much of the conversion of the Anglo-Saxons to Christianity.

[1] The Ecclesiastical History of the English People (Latin: Historia ecclesiastica gentis Anglorum), written by the Venerable Bede in about AD 731