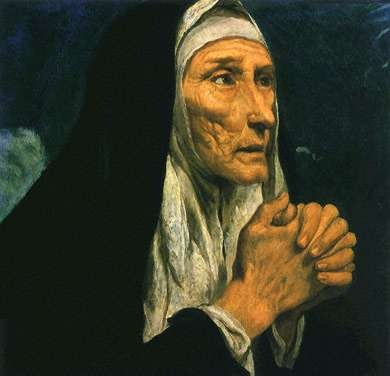 Monica was born at Thagaste, North Africa, around the year 331, a daughter of devout Christian parents. As soon as she was of marriageable age, Patricius came into her life.

He was a man with a violent temper, but Monica kept the marriage peaceful and stable in spite of his outbursts against her and her faith and even his unfaithfulness to her.

By contrast he was a good father, perhaps because of the daily examples of Monica’s gentleness and kindness, which finally had its rewards when Patricius became a Christian a year before he died, when their son, Augustine, was 17.

Augustine, the more brilliant of two sons, was sent to Carthage for his education. He was a quick learner but spent his spare time in youthful carousing.

Monica was heartbroken upon hearing of his loose living and it is said that she began to pray for his conversion. 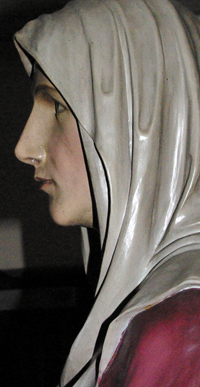 At 29 he was a successful teacher but unknown to his mother he left for Rome and then Milan. She followed him. It is in Milan that her prayers were answered yet again.

He came under the influence of the great bishop Ambrose and eventually became a Christian.

But what of Monica? Like all God’s saints Monica is a woman ‘for all seasons’.

Her advice and her powerful example as a wife and mother are an inspiration for- domestic peace and stability. Monica’s 18 years of caring and crying, coupled with continual prayer, speak eloquently of her perseverance and trust in God’s providence. She asked for no miracle; she simply prayed and sacrificed for the conversion of her son.

Her prayers, disappointments and tears were all means of drawing her closer to God. In her heroic efforts for her son’s conversion, she herself became a saint.

She died in Ostia, the ancient port of Rome, waiting for a ship to take her home, and a tiny basilica stands where Monica would have prayed.

She is patron saint of our parish and a model of perseverance in prayer.