Stations of the Cross Fridays in Lent 10am (after the 9:30am Mass) 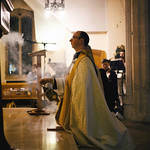 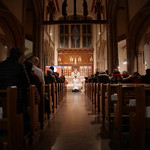 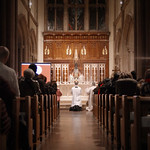 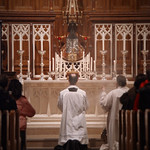 A brief history taken from The First Fifty Years (1978) 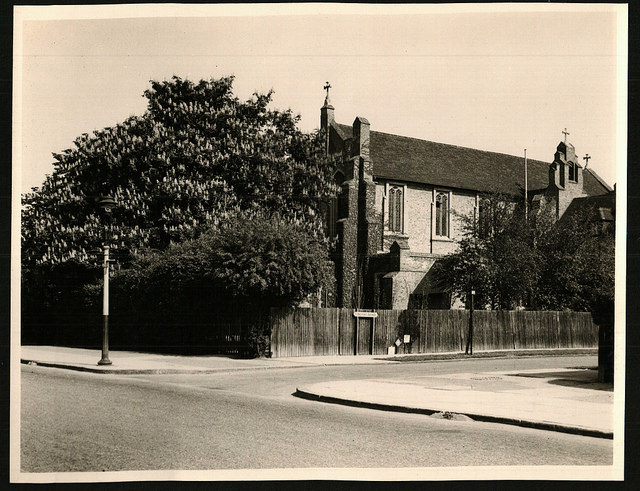 I n the 1920’s, Sudbury, a district in Middlesex lying between Wembley and Harrow, though still largely open fields was already an area of rapid post-war development and increasing population. H’ere Cardinal Bourne hoped that a new Catholic parish would be organised and, in ‘late 1924, this became possible through the generosity of Miss Frances Westwood of Marylebone, who offered to provide money for a new church in the Diocese. At the request of Miss Westwood, Cardinal Bourne invited Fr. Clement Lloyd Russell, then curate at Our Lady of the Rosary, Marylebone, to carry out the proposed project at Sudbury.  lt is this incipient which is now recorded in the lower right-hand corner of the Fr. Russell memorial window in the north transept of St. George’s Church. The window also portrays the execution of St. Richard Reynolds, chosen by ‘Fr’ Russell from the English Martyrs for special devotion in the parish; a row of choir boys to commemorate Fr. Russell’s interest ii singing the Gregorian chant locally; and, as its main figures, St. Augustine, who introduced the Faith into England, St, Gregory the Great, author of the comment, on first seeing the fair-haired Northern barbarians, “Non Angli sed Angeli”-Not Angles but Angels,and Fr. Russell’s own name-saint, Pope Clement, successor to St. Peter as head of the early Church. 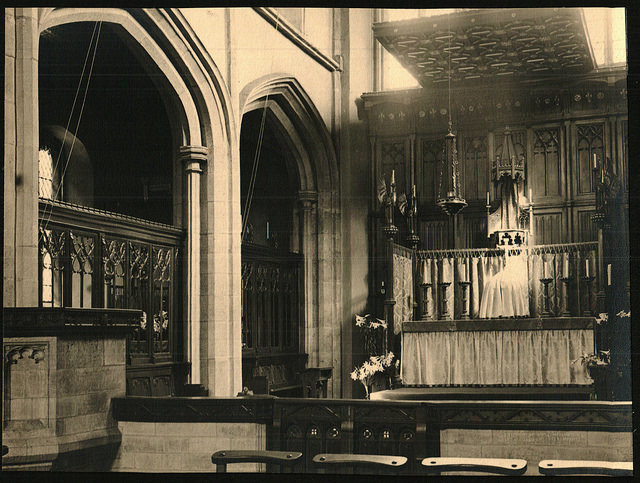 A site for St. George’s had already been given by Mr. George Beale, at the
suggestion of his Catholic wife, when he disposed of the original estate of “Elmwood”, adjacent to the Harrow Road beyond Sudbury tram terminus. More land was added by Miss Westwood and a suitable architect found in Mr. Leonard Williams, A.R.I,B,A,, of Harpenden, a friend of Bentlev, the builder of Westminster Cathedral, and already an expert in English parish churches. As an ex-Anglican parson, Fr. Russell was deeply interested in continuing the tradition of unbroken loyalty between England and the Holy See, and everything about his new church-its dedication to St. George, its pre-Reformation design, its apparelled vestments, its liturgical practice, even down to the beautiful mediaeval script in_which he wrote out the notices the following week was inspired by this idea.

To be a “Roman Catholic” did not necessarily involve adopting the brief cottas, the lace, the skimpy-chasubles.which Victorian England had taken over from the Baroque Rome of Counter-Reformation times, but rather there was a tradition of dignified and beautiful native ecclesiastical art and ceremonial which it was his special task and gift to emphasise and bring out. After_early Masses in what is now the sacristy, the first service in the permanent Church was held on 16th October, 1927, and consecration of the Church by His Lordship Bishop Butt followed a year later’ Such single-mindedness calls forth its due response. Amongst the treasures set out for inspection on the occasion of an episcopal visitation and venerated on least days such as that of St. George, is a relic of the Saint himself, in its handsome reliquary, obtained by Fr.Russell from Baiolle in the Diocese of Arras. This piece of bone, taken from the larger portion. 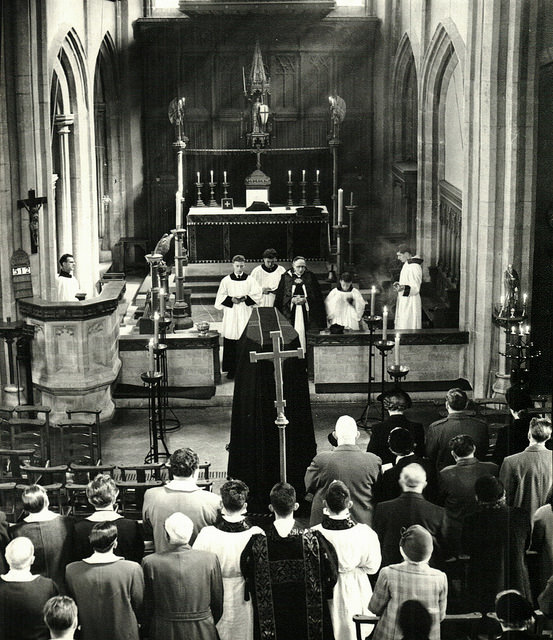 During the Second World War St. George’s survived with little damage beyond a cracked and shaken arch in the south aisle, despite bombs as near as Medway Gardens and incendiaries in St. Andrew’s Avenue. For anyone vividly recalling the Church decked out in splendour for the brilliant sunshine and singing of a Corpus Christi celebration it was an unforgettable experience-the windows being too ldrge for “blacking-out” and Daylight Saving continuing throughout the winter months of war time-to attend early morning Mass shivering in darkness, complete except for one blue-hooded candle, moved by the priest with the missal from one corner of the altar to the other.As numbers grew, parents became increasingly anxious for a Catholic school in the parish, and while seeking repeatedly for permission from the authorities, Fr. Russell built the Hall, thus going into debt for the first time. (ln 1926 the Church had cost of £12,000 and the house £1,900!).  It was expected later on to form part of the final school building, for which this land had originally been intended, and there were those who found its bare brick interior, despite the excellent (and carefully preserved) dance floor, rather austere for festive occasions. The wisdom of its choice, however, has been justified by the way it now harmonises with the cluster of post-war buildings forming the highly valued Parish Centre, with its notable amenities. This alteration of plans was due to the area available being no longer adequate for modern school requirements, but what could not otherwise be employed has now proved invaluable as the car park, unloreseen as a necessity in 1928. Tree planting has recently added to its sightliness, and provision for a Guide and Scout Headquarters can now be made. 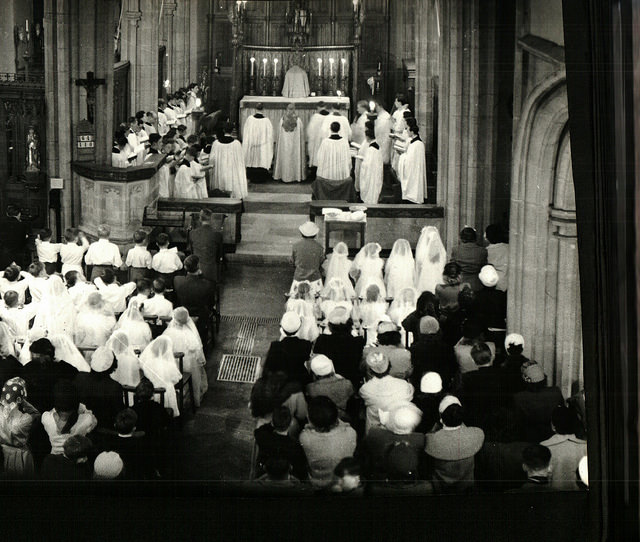 Fr. Russell died in 1965 as the result of a road accident outside the Church, Under his successor, Fr. (now Mgr.) Wilfrid Purney, who is thus only the second rector that the Parish has had in fifty years, the diocesan authorities built first a Primary and then First and Middle Schools further along the road towards Harrow, on ground formerly in the possession of the Calvary Nursing Home. ln the Church itself the New Liturgy has been gently introduced by Fr. Purney. As the .ceremonies were simplified, opportunity arose for a Choir of greater size and scope, whose performance is not only enjoyed by the parishioners but has already become a matter of some celebrity even abroad. To the question of changing the position of the altar so that the priest can say Mass facing the people, great consideration has been given and the opinion of liturgical experts sought, but in this Church, with its relatively long and narrow sanctuary, no really satisfactory solution has yet been arrived at.

This year, 1978, sees the Golden Jubilee of the Consecration of the Church. ln the past fifty years numbers in the parish have greatly increased; a second priest has been at work for many years now; Parish Schools exist and flourish;a most useful Parish Centre has been built; the original fabric of the Church has survived the dangers of war and been carefully maintained; the grounds outside have been improved and cared for; the beauty of its interior continues. lt is intended on this occasion to provide a memorial plaque to Fr. Russell below the window which already commemorates him, but perhaps one should also say of him what is said of Wren, who built St. Paul’s Cathedral, “Sl monumentum requiris, circumspice”.  (lf you would seek his monument, look around.) 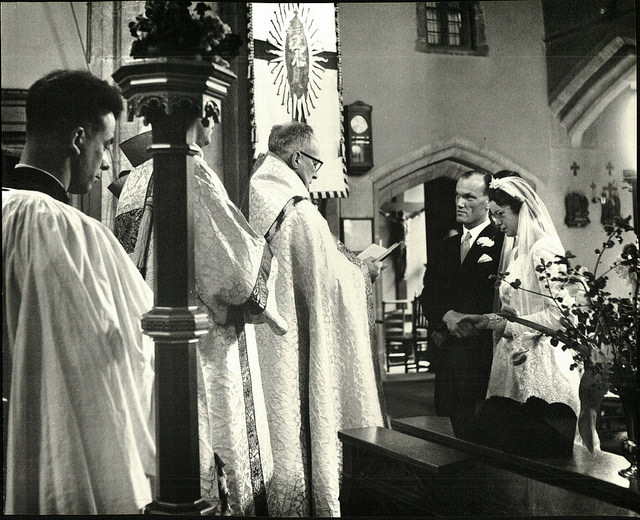