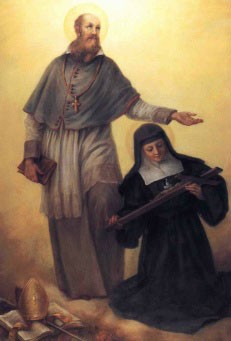 Born in France in 1567, Francis was a patient man. He knew for thirteen years that he had a vocation to the priesthood before he mentioned it to his family. When his father said that he wanted Francis to be a soldier and sent him to Paris to study, Francis said nothing. Then when he went to Padua to get a doctorate in law, he still kept quiet, but he studied theology and practiced mental prayer while getting into swordfights and going to parties. Even when his bishop told him if he wanted to be a priest that he thought that he would have a mitre waiting for him someday, Francis uttered not a word. Why did Francis wait so long? Throughout his life he waited for God’s will to be clear. He never wanted to push his wishes on God, to the point where most of us would have been afraid that God would give up!

God finally made God’s will clear to Francis while he was riding. Francis fell from his horse three times. Every time he fell the sword came out of the scabbard. Every time it came out the sword and scabbard came to rest on the ground in the shape of the cross. And then, Francis, without knowing about it, was appointed provost of his diocese, second in rank to the bishop.

Perhaps he was wise to wait, for he wasn’t a natural pastor. His biggest concern on being ordained that he had to have his lovely curly gold hair cut off. And his preaching left the listeners thinking he was making fun of him. Others reported to the bishop that this noble-turned- priest was conceited and controlling.

Then Francis had a bad idea — at least that’s what everyone else thought. This was during the time of the Protestant reformation and just over the mountains from where Francis lived was Switzerland — Calvinist territory. Francis decided that he should lead an expedition to convert the 60,000 Calvinists back to Catholicism. But by the time he left his expedition consisted of himself and his cousin. His father refused to give him any aid for this crazy plan and the diocese was too poor to support him.

For three years, he trudged through the countryside, had doors slammed in his face and rocks thrown at him. In the bitter winters, his feet froze so badly they bled as he tramped through the snow. He slept in haylofts if he could, but once he slept in a tree to avoid wolves. He tied himself to a branch to keep from falling out and was so frozen the next morning he had to be cut down. And after three years, his cousin had left him alone and he had not made one convert.

Francis’ unusual patience kept him working. No one would listen to him, no one would even open their door. So Francis found a way to get under the door. He wrote out his sermons, copied them by hand, and slipped them under the doors. This is the first record we have of religious tracts being used to communicate with people.

The parents wouldn’t come to him out of fear. So Francis went to the children. When the parents saw how kind he was as he played with the children, they began to talk to him.

By the time, Francis left to go home he is said to have converted 40,000 people back to Catholicism.

In 1602 he was made bishop of the diocese of Geneva, in Calvinist territory. He only set foot in the city of Geneva twice — once when the Pope sent him to try to convert Calvin’s successor, Beza, and another when he travelled through it.

It was in 1604 that Francis took one of the most important steps in his life, the step toward holiness and mystical union with God.

In Dijon that year Francis saw a widow listening closely to his sermon — a woman he had seen already in a dream. Jane de Chantal was a person on her own, as Francis was, but it was only when they became friends that they began to become saints. Jane wanted him to take over her spiritual direction, but, not surprisingly, Francis wanted to wait. “I had to know fully what God himself wanted. I had to be sure that everything in this should be done as though his hand had done it.” Jane was on a path to mystical union with God and, in directing her, Francis was compelled to follow her and become a mystic himself.

Three years after working with Jane, he finally made up his mind to form a new religious order. But where would they get a convent for their contemplative Visitation nuns? A man came to Francis without knowing of his plans and told him he was thinking of donating a place for use by pious women. In his typical way of not pushing God, Francis said nothing. When the man brought it up again, Francis still kept quiet, telling Jane, “God will be with us if he approves.” Finally the man offered Francis the convent. 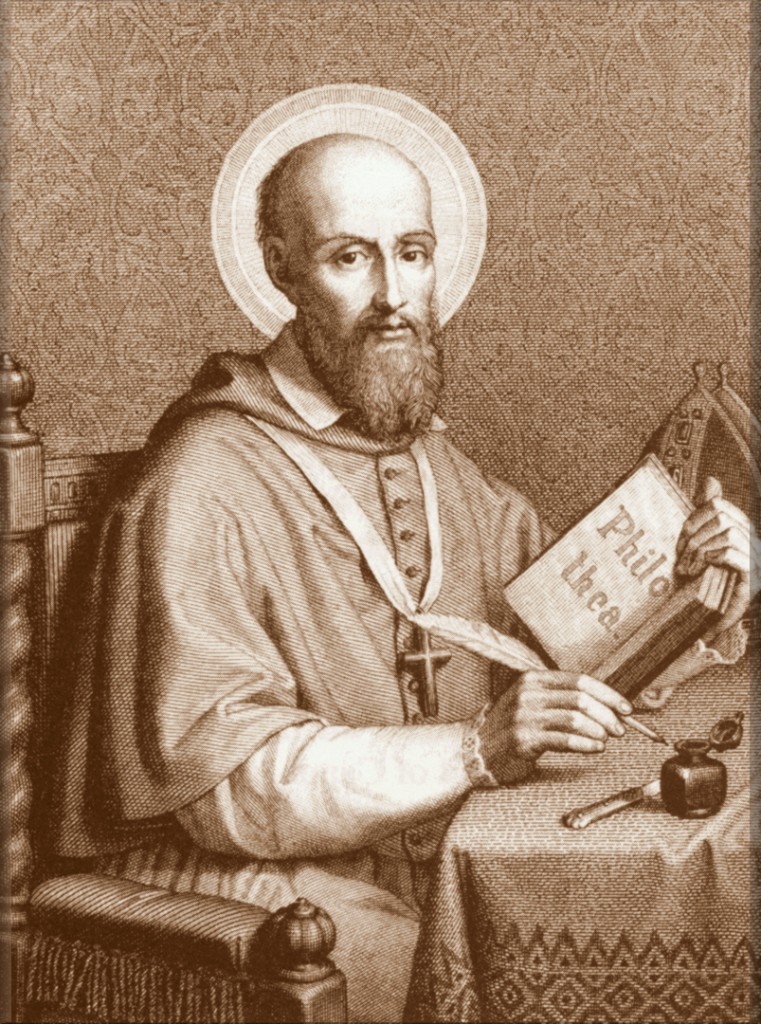 Francis was overworked and often ill because of his constant load of preaching, visiting, and instruction — even catechizing a deaf man so he could take first Communion. He believed the first duty of a bishop was spiritual direction and wrote to Jane, “So many have come to me that I might serve them, leaving me no time to think of myself. However, I assure you that I do feel deep-down- within-me, God be praised. For the truth is that this kind of work is infinitely profitable to me.” For him active work did not weaken his spiritual inner peace but strengthened it. He directed most people through letters, which tested his remarkable patience. “I have more than fifty letters to answer. If I tried to hurry over it all, i would be lost. So I intend neither to hurry or to worry. This evening, I shall answer as many as I can. Tomorrow I shall do the same and so I shall go on until I have finished.”

At that time, the way of holiness was only for monks and nuns — not for ordinary people. Francis changed all that by giving spiritual direction to lay people living ordinary lives in the world. But he had proven with his own life that people could grow in holiness while involved in a very active occupation. Why couldn’t others do the same? His most famous book, INTRODUCTION TO THE DEVOUT LIFE, was written for these ordinary people in 1608. Written originally as letters, it became an instant success all over Europe — though some preachers tore it up because he tolerated dancing and jokes!

For Francis, the love of God was like romantic love. He said, “The thoughts of those moved by natural human love are almost completely fastened on the beloved, their hearts are filled with passion for it, and their mouths full of its praises. When it is gone they express their feelings in letters, and can’t pass by a tree without carving the name of their beloved in its bark. Thus too those who love God can never stop thinking about him, longing for him, aspiring to him, and speaking about him. If they could, they would engrave the name of Jesus on the hearts of all humankind.”

The key to love of God was prayer. “By turning your eyes on God in meditation, your whole soul will be filled with God. Begin all your prayers in the presence of God.”

For busy people of the world, he advised “Retire at various times into the solitude of your own heart, even while outwardly engaged in discussions or transactions with others and talk to God.”

The test of prayer was a person’s actions: “To be an angel in prayer and a beast in one’s relations with people is to go lame on both legs.”

He believed the worst sin was to judge someone or to gossip about them. Even if we say we do it out of love we’re still doing it to look better ourselves. But we should be as gentle and forgiving with ourselves as we should be with others.

As he became older and more ill he said, “I have to drive myself but the more I try the slower I go.” He wanted to be a hermit but he was more in demand than ever. The Pope needed him, then a princess, then Louis XIII. “Now I really feel that I am only attached to the earth by one foot…” He died on December 28, 1622, after giving a nun his last word of advice: “Humility.”

He is patron saint of journalists because of the tracts and books he wrote.