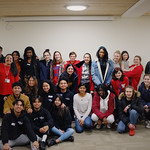 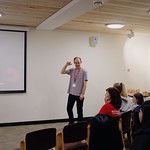 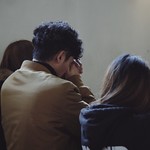 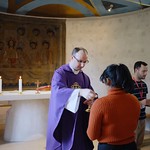 Our parish was founded in 1848 and since then the parish community has gathered weekly, and daily, for the celebration of Mass and other sacraments, and to celebrate significant moments in our lives. That work continues, and today:

“Guided by the Gospel we seek to deepen
our love and knowledge of God.
We reach out in care and friendship to each other
and to those in need,
striving to be a community filled with faith, hope, and love.”

The history of the Catholic Parish of Chiswick contains some very interesting features. From the registers it would appear that the first priests to work in the neighborhood were Benedictines who just before Catholic Emancipation opened a chapel in Acton . In 1850 however it would appear that a secular priest was appointed, with the result that a chapel was soon opened in Turnham Green as well in Chiswick High Road on the north side. The arrival of the Rev. John Bonus in 1852 quickly brought developments. A school was started about 1855 and in a few years plans were set on foot for a larger church and new schools. The site of the present church was bought and on May 3rd 1864 Cardinal Wiseman was present at the opening of the first church at the corner of Duke’s Avenue, whilst the foundation stone of the schools at Acton Green was laid on the same day, the Rev. J Ryan now being in charge.
So quickly did the parish grow that in twenty-five years the church had become far too small. The late Canon Tuke obtained additional land on the same site, the old church was pulled down and the present magnificent structure was opened by Cardinal Manning on October 13th 1886. After long years of struggle the debt was cleared and the church consecrated in 1904 in the time of the Rev. J Keating.

At the end of the war of 1914-1918 Canon Egan set on foot plans for a Tower as a memorial of the men that had fallen. The were successfully and happily brought to completion by Canon Tubbs who was also responsible for the complete renovation of the interior. It may be said that every priest who has been in charge here in turn left his mark on the parish, its church or its life from 1852 to 1935. We owe them a debt of gratitude.

The double dedication of the church shows its origin from the chapel of Our Lady of Grace at Acton. The dedication to St Edward came with the present church.

It was during the night of the 19th February 1944 when one of the last bombs to fall on Britain landed next to the church at the top of Dukes Avenue. The east wall took the full force of the explosion. After the arrival of Father William Wood in 1953, the wall and the roof were restored and the porch and baptistery (now the repository) constructed. Some years later when the Express Dairy closed it’s depot in Bourne Place just opposite the church, Father Wood, with great foresight, bought the site. But it wasn’t until the 15th December 1980, that Cardinal Hume officially opened the Parish Centre.

In recent times, due to the lack of new priests, the parishioners have taken on a more visible and vital role becoming, for example, Eucharistic Ministers, Readers and Catechists. There are many ministries within the parish, whether large and small are all very important and always welcome new members.

Above all, each priest and parishioner has contributed something to make Our Lady of Grace and St. Edward parish what it is – a thriving entity.