Holy Days of Obligation:
Vigil: 6.30 pm
Holy Day: 10.00 am and 6:30 pm
Any changes to the weekday services will appear in the Parish Newsletter

Times of Other Services

Sacrament of Reconciliation (Confession): Monday to Friday 6.15 pm, Saturday 10.45 am & 6.00 pm
Daily Prayer: Monday to Friday 8.00 am and 6.00 pm, Saturday 9.30 am
Blessed Sacrament Adoration: Monday,Tuesday,Thursday,Friday 10.30 am
Rosary: Wednesday 10.30 am - followed by Tea/Coffee in the Founders Room
Legion of Mary: Tuesday 7.15 pm in Parish Library
Lectio Divina: Saturday 11.00 am in Founders Room. Tea served

St Peregrine Mass of Healing: Last Wednesday of each month at 6.30 pm 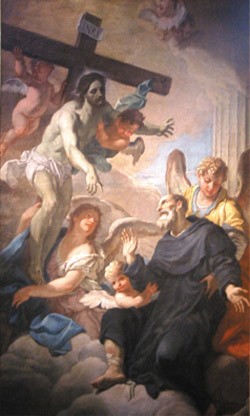 With Mary at the foot of the Cross of her suffering Son, Jesus, We, Servants of Mary, promote and sustain the St. Peregrine Ministry of healing and compassion. Through our ministry of prayer, blessing, pilgrimage, reconciliation and evangelisation, we accompany caregivers and those persons who live with serious illness, especially cancer, as they seek to find healing, support, peace and God in their daily lives.

Peregrine was born in Forli, Italy, around 1265. At that time, Forli was governed by the Pope as part of the Papal States, and Peregrine grew up in a family that was actively involved in the opposition, or anti-papal party. Because of anti-papal activity, the city was under the church penalty of interdict, meaning that Mass and the Sacraments could not be celebrated there. St. Philip Benizi, Prior General of the Servants of Mary, went to Forli to preach reconciliation. Young Peregrine, very intense in his political fervour, not only heckled Philip during his preaching, but, in fact, struck him.

The moment of striking Philip is said to have dramatically changed Peregrine. Peregrine repented and humbly asked Philip for forgiveness. Philip received him with love. From that moment, the young man began to scorn the vanities of the world and to pray most fervently to the Blessed Virgin, asking that she show him the way of salvation.

Peregrine began channeling his energy into good works and eventually joined the Servants of Mary in Siena, Italy. He returned to Forli, where he spent the rest of his life, dedicating himself to the sick, the poor, and those on the fringes of society. He also imposed on himself the penance of standing whenever it was not necessary to sit. This led to varicose veins, which later deteriorated into an open sore on his leg, and was eventually diagnosed as cancer.

Peregrine’s leg wound became so serious that the local surgeon decided to amputate the leg. The night before the surgery, Peregrine prayed before the image of the crucified Christ, and when he awoke, the wound was healed and his leg saved. He lived another 20 years, dying on May 1, 1345, and the age of about 80. Peregrine was canonized on December 27, 1726, and has been named the Patron Saint of those suffering from cancer.

The St Peregrine Mass of Healing takes place on the last Wednesday of each month, at 6.30pm.

Prayer for the sick of the world through the intercession of St. Peregrine, OSM:

Graciously hear the prayers
which we present O God, to you
in honor of St. Peregrine,
your beloved servant
and patron of those suffering from cancer, AIDS,
or other life-threatening disease.
Grant that we may receive help in our needs
through the intercession of him
whose life was so pleasing to you.
Hear us in the name of Christ, our Lord.

God, you gave St. Peregrine an angel for his companion,
The Mother of God for his teacher,
and Jesus for the Physician of his infirmity.
Grant, we beg You, through his merits,
That on earth we may love our holy angel,
The Blessed Virgin, and our Savior,
and in heaven bless them forever.
Grant that we may receive the favor we now ask
Through Christ our Lord.