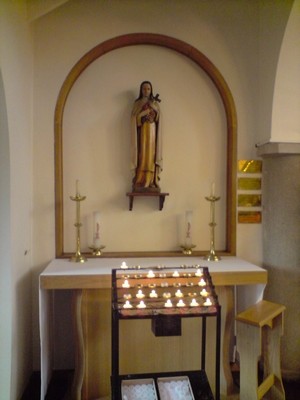 Dedicated to St Theresa of the Child Jesus (1873 – 1897), a French Carmelite Sister, the Church is placed in the spiritual tradition of being rested in the lives and thought, both of St Theresa and the earlier Carmelites St Theresa of Avila and St John of the Cross.

This dedication provides the focus for a mission statement:

The Parish and Headstone Lane is situated in the Harrow Deanery. It was founded in 1953 by Cardinal Bernard William Griffin. Before the Church was built, Parishioners went to Mass at Our Lady of Lourdes Convent, which is now Sequoia Park.

The First Parish Priest was Fr. James Woodward who was with the Parish for 22 years. Parishioners worked hard in the beginning.The Church was built without a hall, which made it hard to get functions going, so it meant bazaars and dances were held in St.Theresa’s school hall, now Morrisons Supermarket.Parishioners carried urns, teapots etc. down the Uxbridge Road!

Four societies were born during this period: Guild of St.Stephens, St.Vincent de Paul, Womens Guild, later to become the Catholic Womens League (CWL):A men’s Organisation. There were many pilgrimages to Aylesford and Walsingham. Fr.Woodward died in 1975.

Fr.Lawrence Allan was the next Priest.He was only with St.Theresa’s for 6 years but in that time he did a lot.He turned the Baptistry into a kitchen and pushed the doors out into the Church, making the Parish Room.

A folk group was formed, run by David Moran, with a lot of teenagers.They sang at 6.30 p.m. Mass on Sundays.They also painted the Parish Room. The choir was upstairs, led by Kath Howell, Organist Philomena Brothers. The C.W.L. continued to flourish, 30 members ran bazaars, nearly new sales, cake sales, cleaning the church linen and the Church.There were concerts, dances and parties held either at the rugby club, St.Theresa’s Hall or the Old Whittington.

When Fr.Allan died in 1981, Fr.Leslie Cole took his place and he stayed for 9 years.He was a great preacher and was very keen on ecumenism.

In 1970 Terry Cryer started a Junior Group called St.Theresa’s Young Players, who performed pantos and musical plays.Also the Roundabout Players started in 1983 who gave concerts, cabaret, plays etc. with Mary Cahill, Vera Lake, Betty and Bernard Donovan, Pam Bertolotti and many more.That lasted 12 years. Fr.Cole loved the shows and allowed the performers to dress in the Church and use the Parish Room as the theatre. The C.W.L. was still going strong and Eileen Stewart started C.A.B.S. (Come and be Sociable) on a Thursday afternoon, run by Vera Lake and still going strong.

Before Fr.Peter Lyons came, there was a very charismatic priest called Fr.Norton, who looked like a Rabbi and preached his homily amongst the congregation!He stayed 6 months and was sent to Palmers Green.

Fr.Lyons stayed from 1990 to 1994. He had been happily in his last Parish for a long time and was in his last 4 years before his retirement when he was sent to St.Theresa’s. He must have felt very lost. He retired in 1994 and died in January 1998.

When Fr.John Kearsey came in 1994 he made many improvements. He moved the organ and choir downstairs. Painted the Sanctuary with the help of Eddie O’Brien, Jimmy Heslin, Tony Baker and Kieran Pollard. Removed the Altar rails and made the Church beautiful. Pam Bertolotti started the Rosary Group and the Coffee morning on a Friday and Pauline Neighbour looked after the Sacristy.The Parishioners were very sad when Fr. became ill and were slightly in limbo not knowing what to do.Eddie O’Brien looked after him, as did Pauline Neighbour and Pam Bertolotti. He died in 2004.

The Parish Council is going strong – Pat James has been Secretary for over 30 years. Margaret Norrington is Organist, and looks after the choir with Pat. David Wheeler and Dominic Rodrigues runs the Folk Group. The Readers are looked after by Elizabeth Benjamin and the Ministers of Communion by Terence King. Shirley Brier helps with the First Communions and Margaret O’Keeffe helps with the Confirmations.

Fr. Gerald Freely has helped Fr. Richard by saying the Masses at St.Theresa’s on many occasions and is always welcome in our Parish.

At Your Word Lord run by Alice Cowan. This brought many people together spiritually and social life returned with the start of the Social Committee run by Betty and Bernard Donovan, Terry Cryer, Pam Bertolotti and Bernie and Tom Small. Betty and Bernard have since left parish and the Social committe has been disbanded after many years. Hopefully new people will come forward to follow in their footsteps.

Fr.Richard is bringing many more babies into the Church (where does he find them all!)

Sadly the old stalwarts of the Parish have died, Mary Cahill, Eddie O’Brien and Joe Moran, but new parishioners are coming.

So onward and upwards goes St.Theresa’s. May it last for many years!

God Bless us all!!