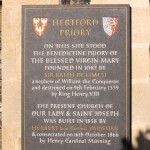 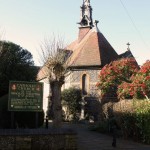 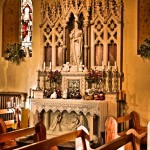 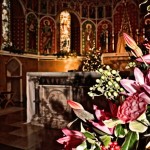 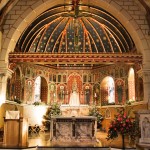 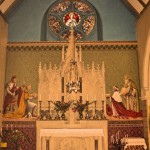 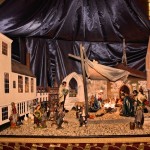 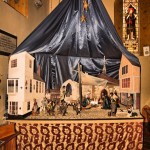 In 668 AD Pope Vitalian consecrated Theodore of Tarsus as Archbishop of Canterbury in Rome and sent him to England. Theodore was a remarkable character and set about reconciling the two traditions of Christianity and imposing order and unity in the English Church. The culmination of Theodore’s work occurred in 672/3 (the former date refers to the old Saxon year which began on 25th September) when a major synod took place at Hertford.

This Synod for the first time united the Church of the six English Kingdoms. Under Theodore’s firm guidance the date of Easter was finally resolved, divorce forbidden and rules set out for the dioceses and the conduct of bishops and clergy. From the Synod of Hertford until the reign of Henry VIII the English Church was united in itself and one with the Bishop and See of Rome. Two memorials commemorating the Synod were set up in the town in 1934; a civic memorial in the castle grounds and a cross in the grounds of the Catholic Church. A third memorial bronze of the Synod Fathers has been placed at the entrance of the Castle Hall.

FROM THE CONQUEST TO THE REFORMATION
The piece of land on which our church is built is reputed to have belonged to King Harold, who was buried at Waltham Abbey. After the conquest this land passed to one of the Conqueror’s nephews, Ralph de Limesi, who gave it as a foundation for a Benedictine priory dedicated to Our Lady, as a daughter house of St Albans Abbey. The Priory church was large, even by todays standards. The nave alone was 87 feet long, which made the church the third largest in the county. The interior, it seems, was rather like the existing Norman parts of St Albans Abbey. In 1998 a direct descendent of Ralph , the current Marquis De Limesi, visited the parish and gave a talk to the Hertford and Ware Historical Society.
The British Museum possesses a large thirteenth century seal of the Priory, which features within a vessica shape a half length figure of Our Lady with Christ in her left arm, and with the inscription ‘sigillum sanctae Mariae de Hertfordia’. The present parish seal is based on this design.
There is some confusion as to the actual date of the suppression of the priory. Some cite a date of 9th February 1538/9. The priory and its land were purchased by Sir Anthony Denny. Hertford Priory was efficiently dismantled, a small church dedicated to St John was left by the Dennys to serve the parish, although we read that it became so neglected that early in the seventeenth century this was closed and the parish amalgamated with All Saints.
FROM 1848 TO THE PRESENT DAY
The Restoration in 1850 of the Catholic Hierarchy marked the point at which Catholicism began to flourish again in the country as a whole. Mass had begun to be said again in Hertford in 1848. Priests from St Edmund’s College came each Sunday to say Mass in a room of the Bull Inn on Bull Plain. Soon the congregation outgrew this place and moved on to the Commercial Inn. There were about 150 Catholics in and about Hertford. Father (later Cardinal) Herbert Vaughan, Vice President of St Edmunds College took over the Hertford Mission. He began collecting money to build a new church and bought land which once had formed part of the Priory. The foundation stone was laid by Cardinal Wiseman on 18th October 1858 and he opened the Church on 16th June 1859.In 1861 Vaughan moved to London, founding the Mill Hill Missionary Institute, became Bishop of Salford, returning to Westminster as Archbishop and later Cardinal. He was succeeded in Hertford by Fr Francis Stanfield. By this time a house and school had been built and Fr Stanfield became the first resident priest. He stayed for 19 years in Hertford, and is best known as a composer of hymns, including ‘Sweet Sacrament Divine’. The Church was consecrated on the 16th October 1866 by Cardinal Manning. In 1917 there were some 200 parishioners. Education, always a priority in Catholic life, has been well served in the parish. In 1898 the Sisters of Mercy from St Joseph’s Convent in Chelsea sent three of their number to Hertford, having bought a house and garden opposite the church. The Sisters taught both at the Parish School in St John’s Street and also at their own small private day and boarding school. This continued until the 1950’s when the Sisters established a new convent and school at Hertingfordbury. The Sisters left Hertford in 1985.St Joseph’s voluntary-aided RC school for infants and juniors in North Road was opened in 1968 by Bishop Christopher Butler OSB, replacing the by then cramped conditions in St John’s Street adjacent to the Church. The School continues to serve the Catholic community in Hertford with demand for places at a premium and receiving an “Outstanding” OFSTED Report in June 2006. The old school building still stands and is now used as a Parish Hall.A major restoration of the church and hall interiors began in the 1990’s. The removal of a false ceiling in the parish hall revealed not only dry rot, but also a fine timber structure. This was repaired and stripped down to make a most attractive interior.GENERAL ARCHITECTURAL DESCRIPTION

The present church was built between 1859 and 1861, at the instruction of Herbert Vaughan, on a plot just to the north of the site of the priory church, to the designs of the architect Henry Clutton (1819-1893). Clutton had been a partner of William Burgess. The Catholic architect Bentley, who was to build Westminster Cathedral and one of the most beautiful churches of this Diocese, Holy Rood Watford, was a pupil in Clutton’s office. The builders at Hertford were the local firm of Ekins.

Externally the church appears to follow very much the local pattern of a simple flint box with brick dressings and stone window surrounds, and indeed, is redolent of the slightly smaller Norman church at Bengeo, within the parish.

Originally a low cloister-like porch lead directly into the church from the west end, after a picturesque walk along the length of the building. However, a Millennium project funded by parishioners saw a fine new porch and cloister built in traditional style with flint, stone dressings, green oak and pegged tiles to match the church. This was formally opened in 2002 by the Marquis De Limesi, making a return visit to Hertford.  The interior is simple, and feels quite the Early-English parish church, despite its French carvings. The timber roof is of crutched rafter construction, typical of Hertfordshire and East Anglia, and indeed identical to that at Bengeo, possibly from the 15th century.

The sanctuary is a polygonal apse with a painted timber vault beyond an arch on corbelled pilasters with good foliate caps, and a polychrome rood-beam added in 1996. The sanctuary walls have mural paintings of the Apostles and the English Martyrs set in an architectural framework combining French 13th-century detailing with East-Anglian rood-screen patterns, carried out as part of the recent restorations by Howell and Bellion. An earlier painting of apostles in foliate niches had been destroyed in the 1960’s. The alabaster altar and reredos are the remains of a larger altarpiece of 19th century French style and manufacture, reordered in the 1970’s. The gilt openwork wooden spire on the Tabernacle is modern, as is the carved Holy Spirit at the apex of the vault, the work of Michael Fisher of Chelsford. The restoration of the sanctuary is to the designs of the architect, Anthony Delarue. Boards detailing the Priors of  St Mary’s Priory from Foundation until Dissolution, and of Parish Priests since 1848 are on the end walls at the back of the Church. The Church is Statutorily listed Grade 2.

Catholic church buildings have, through the ages, made much of the main door of the church. Christ described Himself as “the door of the sheepfold” and “through Him” we come to the Father. In the main door are two lovely wooden panels,carved in 1995 by Stephen Foster of Carmel Studios, Ware. On the left Adam and Eve are expelled from Paradise by an Angel. The other panel shows Paradise Regained. The blessed enter eternal life, the gate of the Heavenly Jerusalem. Mention must be made of the stained glass windows in this aisle. Most of them are by Nathaniel Westlake (1833 – 1921) one of the great English stained glass makers. The windows are all richly painted, the figures placed in elaborate architectural surrounds. The subject of each window often relates to the donor’s inscription.

Between Christmas and Candlemas (February 2nd) the Crib contains models of historic buildings in Hertford and almost a hundred figures of animals and people.

Between the Lady Chapel and the High Altar is the Font, re-sited here in the 1970’s. The font stands rather uneasily on red stone columns. It is said that these came from All Saints’ Church Hertford, after the fire of 21 December 1891. A carved panel of the Baptism of Christ behind the font is by Stephen Foster.

The original decoration had disappeared by the 1960’s. Gradual deterioration of the Victorian wall paintings led to unsuccessful restoration, especially of the figures of the 12 Apostles. Cracks appeared in the walls over the years, destroying parts of the original work. Finally the removal of the large canopied altarpiece that filled the whole of the east wall, created a sanctuary with a changed focal point and a different perspective. In the early 1990’s work was done to try to solve the problem of cracking and movement in the walls and involved an external steel girdle around the apse and an internal tie rod across the chancel arch.

A major restoration and re-decoration of the Church now Grade II listed, began in 1994, loosely based on the original designs. The tabernacle was given a wooden canopy, to restore the perspective of the old stone high altar canopy. The large crucifix which had hung on the east wall since the 1970’s was placed on a new Rood Beam made to hide the tie rod across the arch. The composition of the beam and crucifix relates very much to the English late medieval tradition. The base of the cross holds a relic of the True Cross. On either end of the beam there are coats of arms, that on the left of Pius IX, who was pope at the time of the building of the church, and John Paul II, pope at the time of the erection of the Rood.

In the porch is a plaque commemorating a Hertford Civic Award won by the Church in 1995 for work done principally in the Sanctuary, whilst a second plaque at the end of the cloister in respect of  the new porch, cloister and paved garden area, was awarded in 2002. On the external buttress a fine slate plaque commemorates the Priory and the present church – and their respective founders.