On occasions when there is a school Mass or a Funeral, the time of the Mass will be moved to 10:00 am. Please check the newsletter for these changes. 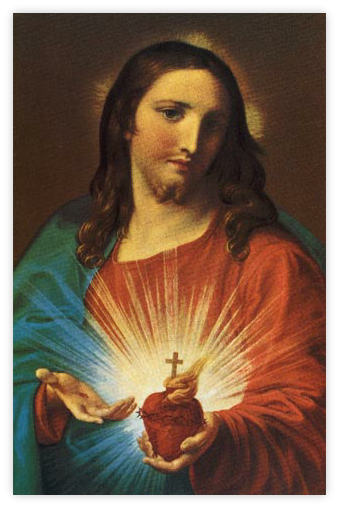 Devotion to the Sacred Heart (also known as the Most Sacred Heart of Jesus) is one of the most widely practiced and well-known devotions, taking Jesus Christ’s physical heart as the representation of his divine love for humanity.

This devotion is predominantly used in the Catholic Church and among some high-church Anglicans and Lutherans. The devotion especially emphasizes the unmitigated love, compassion, and long-suffering of the heart of Christ towards humanity. The origin of this devotion in its modern form is derived from a Roman Catholic nun in France, Marguerite Marie Alacoque, who said she learned the devotion from Jesus during some apparitions occurred between 1673 and 1675, and later, in the 19th century, from the mystical revelations of another Roman Catholic nun, in Portugal, Mary of the Divine Heart, countess Droste zu Vischering, who requested that Pope Leo XIII consecrate the entire world to the Sacred Heart of Jesus. Predecessors to the modern devotion arose unmistakably in the Middle Ages in various facets of Catholic mysticism.

In the Roman Catholic tradition, the Sacred Heart has been closely associated with Acts of Reparation to Jesus Christ. In his encyclical Miserentissimus Redemptor, Pope Pius XI stated: “the spirit of expiation or reparation has always had the first and foremost place in the worship given to the Most Sacred Heart of Jesus”. The Golden Arrow Prayer directly refers to the Sacred Heart.

Devotion to the Sacred Heart is sometimes seen in the Eastern Catholic Churches, where it remains a point of controversy and is seen as an example of Liturgical Latinisation.

The Sacred Heart is often depicted in Christian art as a flaming heart shining with divine light, pierced by the lance-wound, encircled by the crown of thorns, surmounted by a cross and bleeding. Sometimes the image is shown shining within the bosom of Christ with his wounded hands pointing at the heart. The wounds and crown of thorns allude to the manner of Jesus’ death, while the fire represents the transformative power of divine love.