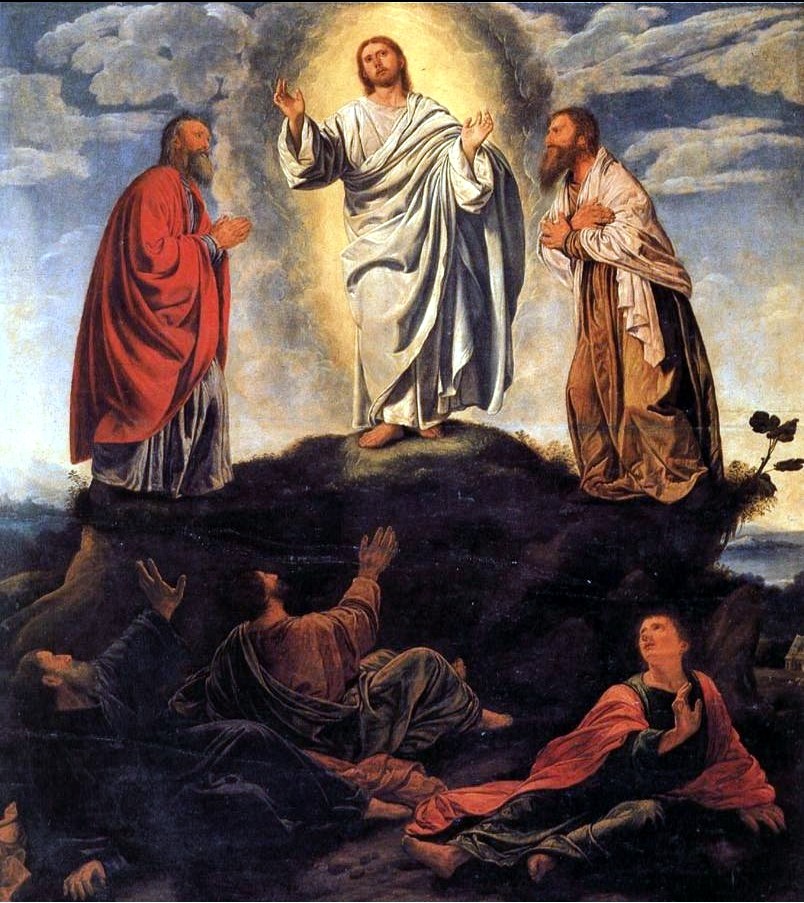 About a week after His sojourn in Cæsarea Philippi, Jesus took with him Peter and James and John and led them to a high mountain apart, where He was transfigured before their ravished eyes. St. Matthew and St. Mark express this phenomenon by the word metemorphothe, which the Vulgate renders transfiguratus est. The Synoptics explain the true meaning of the word by adding “his face did shine as the sun: and his garments became white as snow,” according to the Vulgate, or “as light,” according to the Greek text.

This dazzling brightness which emanated from His whole Body was produced by an interior shining of His Divinity. False Judaism had rejected the Messias, and now true Judaism, represented by Moses and Elias, the Law and the Prophets, recognized and adored Him, while for the second time God the Father proclaimed Him His only-begotten and well-loved Son. By this glorious manifestation the Divine Master, who had just foretold His Passion to the Apostles (Matthew 16:21), and who spoke with Moses and Elias of the trials which awaited Him at Jerusalem, strengthened the faith of his three friends and prepared them for the terrible struggle of which they were to be witnesses in Gethsemani, by giving them a foretaste of the glory and heavenly delights to which we attain by suffering.

Location of The Transfiguration

Already in Apostolic times the mount of the Transfiguration had become the “holy mount” (2 Peter 1:18). It seems to have been known by the faithful of the country, and tradition identified it with Mount Thabor. Origen said (A.D. 231-54) “Thabor is the mountain of Galilee on which Christ was transfigured” (Comm. in Ps. lxxxviii, 13). In the next century St. Cyril of Jerusalem (Catechetical Lectures II.16) and St. Jerome (Epistles 46, 53 and 108) likewise declare it categorically. Later St. Proculus, Patriarch of Constantinople (d. 447; Orat. viii, in Transfig.), Agathangelus (Hist. of Armenia, II, xvii), and Arnobius the Younger (d. 460; Comm. in Ps. lxxxviii, 13) say the same thing. The testimonies increase from century to century without a single dissentient note, and in 553 the Fifth Council of Constantinople erected a see at Mount Thabor (Notitif. Antioch. . . . patriarch.).

Some modern writers claim that the Transfiguration could not have taken place on Mount Thabor, which, according to Josephus, was then surmounted by a city. This is incorrect; the Jewish historian speaks neither of a city nor a village; he simply fortified, as he repeats three times, “the mount called Itabyrion” (“Bell. Jud.”, II, xx, 6; IV, i, 8; Vita, 37). The town of Atabyrion of Polybius, the Thabor or Celeseth Thabor, the “flank of Thabor” of the Bible, is situated at the foot of Mount Thabor. In any case the presence of houses on a wooded height would not have made it impossible to find a place apart.

It is again objected that Our Lord was transfigured on Mount Hermon, since He was at that time in its vicinity. But the Synoptics are all explicit concerning the lapse of time, six days, or about eight days including those of departure and arrival, between the discourse in Cæsarea and the Transfiguration, which would infer a somewhat lengthy journey. Moreover the summits of Hermon are covered with snow as late as June, and even the lesser peaks of 4000 or 5000 feet are likewise snow-covered in February and March, the period of the Transfiguration. Finally, the ancients judged of the height of mountains by their appearance, and Thabor especially was considered a “high mountain”, if not by David and Jeremias, at least by Origen and St. Jerome and the pilgrims who made the ascent.