Background and History of the Parish

During the 19th century the area of Notting Hill was part of the Ladbroke Estate. The development of the land to the west of the estate began in 1820 and was completed in 1833, resulting in the building of the impressive large houses which remain to this day and reflect the social, economical and racial diversity of the day. The undeveloped part of the estate was used as a racetrack until its closure in 1841 and the census of 1851 indicates the nature and density of the population, the occupants of houses in Lansdowne Crescent numbered 133 – 53 of whom were servants. The householders ranged from doctors to merchants. On the western side of Portland Road the people lived I densely populated hovels, the main trades being pig keeping and pottery manufacture, mostly tiles, bricks, drainpipes and flowerpots.

During the 1840’s and 50’s the Catholic population in West London increased significantly, largely a result of Irish immigration. In 1859 Henry Augustus Rawes, and Oblate of St Charles, whose community were responsible for the establishment of the other local parishes such as St. Mary of the Angels in Moorhouse Road and Our Lady Queen of Heaven in Queensway, began his search for a site on whch to build a church for the “poor and populous district of Notting Dale”. Two sites were considered, the first up on the hill by St. John’s Church, the other on Pottery Lane. Rawes chose this site for in his view the rich could always come down the hill to go to church, but the poor would almost certainly not go up it.

The church was built in 1860 and the presbytery and school were added in 1863. Soo the number of baptisms and marriages increased and sustained a healthy level, schools were founded and sodalities and confraternities were introduced, however the level of poverty remained and was a cause of great concern. In later years the area would be known as the Notting Dale “Avernus” or Mouth of Hell, the inhabitants made of beggars, cab-runners, loafers, thieves and prostitutes. During this period the ‘West London News’ reported that “If the church of St. Francis be of gloomy aspect, it certainly throws a gleam – a ray of hope – on the outside moral darkness in the midst of which it is situated.” The Parish Priest of the time Fr. Tasker believed that the evidences of their faithfulness and good work would in time be made manifest.

By 1907 the morals of the area improved, however poverty and overcrowding would not be banished and would remain a concern up to the present day. By 1914 the parish had established three schools, an infant school in Treadgold Street, a boy’s junior school in Silchester Road and the girl’s junior school located at Pottery Lane. The girl’s school became the Community Centre when in 1982 both junior schools joined the infant school in Treadgold Street, where St. Francis Infant & Junior School now stands. In the mid 1990’s, after many years struggling to improve conditions at the school, this site was developed and the new school was built. The Community Centre provides a meeting place for a number of local and parish based groups, the rooms on the first floor are rented out at a low rate to charitable organisations. The priests, the parish sisters, together with their pastoral co-workers have consistently strived to meet what they recognise to be the outstanding needs of the day. The Hand in Hand group provide transport for the elderly and disabled members of the parish to attend Mass as well as holding a monthly lunch and organising trips throughout the year. The parishioners raised the funds to buy two new ambulances in the past twenty years. St. Francis Parish is a member of the Churches Together in Notting Hill, which comprises of members from all the Christian churches in the area who meet and pray together. The Diocesan renewal programme “At Your Word, Lord” has flourished in the parish, with 17 small faith-sharing groups established in the parish. 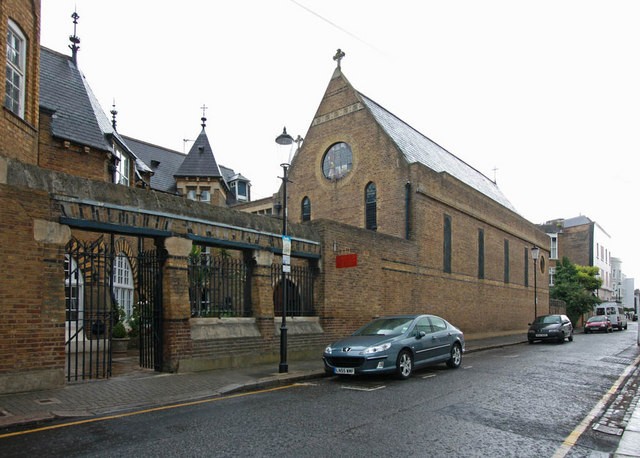 The church was built by John Bentley, later famous as the architect of Westminster Cathedral. The church was built in a simple style imposed by both the poverty of the neighbourhood and the clergy’s limited resources. The building of the church was paid for almost entirely by Fr. Rawes personally. Bentley enlisted the creative skills of a number of artists who included the Belgian sculptor Theodore Phyffers and the artist N.H.J. Westlake. Phyffers was responsible for the statue of Our Lady here at St. Francis, whilst Westlake painted on slate the Seven Dolours of Mary that line the walls of the Lady Chapel. The Lady Chapel also contains the altar of St. John the Evangelist. Westlake also painted again on slate the Stations of the Cross. The stonecarving was undertaken by Earp of Lambeth.

The church originally consisted of a three bay nave, the north aisle (north liturgically speaking, since the church does not lie from west to east), the chancel and the Lady Chapel had to be set in a curve around the apse, due to the lie of the land. An adjoining plot of land was needed to erect the presbytery and the school. The church, presbytery and school building (Community Centre) are all built with the same yellow brick for uniformity. Bentley extended the north aisle to include the Baptistry which is in the 13th century French Gothic style. The font itself is of red granite, the supporting columns and plinth are alabastar and green and red marble. The terracotta and cream tiles of the platform on which it stands compliment the rest of the floor. Hanging from four chains over the font is an octagonal turret-shaped cover. It was fashioned in 1865 fro polished oak, with angels painted in black gracing each of the eight panels and was a personal gift to the church from Bentley. The Baptistry was affected by one significant structural change in 1882. In order to provide more accommodation in the Presbytery, a tribune was added over the Baptistry.

The interior was simply decorated with delicate luminous paintings, the decorative details do not overwhelm the eye or distract the mind. Bentley was largely responsible for the overall decoration of the church. After his death Bentley’s son Osmond assumed responsibility for the continued decoration and upkeep of the church, which has been re-decorated at regular intervals over the years. In 1983 the church was restored to its original simplicity, and Bentley would cavil only with the removal of the communion rails to make room for a forward-facing altar in accordance with Vatican II.