The Black Madonna of Częstochowa  is a revered icon of the Virgin Mary housed at the Jasna Góra Monastery in Częstochowa, Poland. 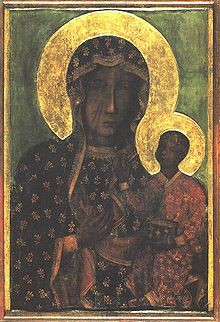 The origins of the icon and the date of its composition are still hotly contested among scholars. The difficulty in dating the icon stems from the fact that the original image was painted over, after being badly damaged by Hussite raiders in 1430. Medieval restorers unfamiliar with the encaustic method found that the paints they applied to the damaged areas “simply sloughed off the image” according to the medieval chronicler Risinius, and their solution was to erase the original image and to repaint it on the original panel, which was believed to be holy because of its legendary origin as a table top from the home of the Holy Family. The painting displays a traditional composition well known in the icons of Eastern Orthodoxy. The Virgin Mary is shown as the “Hodegetria” (“One Who Shows the Way”). In it the Virgin directs attention away from herself, gesturing with her right hand toward Jesus as the source of salvation. In turn, the child extends his right hand toward the viewer in blessing while holding a book of gospels in his left hand. The icon shows the Madonna in fleur de lys robes.

One of the oldest documents from Jasna Góra states that the picture travelled from Jerusalem, via Constantinople and Belz, to finally reach Częstochowa in August 1382 by Władysław Opolczyk, Duke of Opole.[citation needed] However more recent Ukrainian sources state that it was taken by Władysław Opolski from the Castle of Belz, when the town was incorporated into the Polish kingdom and that earlier in its history it was brought to Belz with much ceremony and honors by king Lev I of Galicia. The golden fleur-de-lis painted on the Virgin’s blue veil parallel the azure, semee de lis, or of the French royal coat of arms and the most likely explanation for their presence is that icon had been present in Hungary during the reign of either Charles I of Hungary and/or Louis the Great, the Hungarian kings of the Anjou dynasty, who probably had the fleur-de-lis of their family’s coat of arms painted on the icon. This would suggest that the icon was probably originally brought to Jasna Gora by the Pauline monks from their founding monastery in Hungary.

The Black Madonna is credited with miraculously saving the monastery of Jasna Góra (English: Bright Mount) from a 17th-century Swedish invasion, The Deluge. The Siege of Jasna Góra took place in the winter of 1655 during the Second Northern War / The Deluge — as the Swedish invasion of the Polish-Lithuanian Commonwealth is known. The Swedes were attempting to capture the Jasna Góra monastery in Częstochowa. Their month-long siege however, was ineffective, as a small force consisting of monks from the Jasna Gora monastery led by their Prior and supported by local volunteers, mostly from the szlachta (Polish nobility), fought off the numerically superior invaders, saved their sacred icon and, according to some accounts, turned the course of the war. This event led King John II Casimir Vasa to “crown” Our Lady of Częstochowa (“the Black Madonna”) as Queen and Protector of Poland in the cathedral of Lwów on April 1, 1656.

Because of the Black Madonna, Częstochowa is regarded as the most popular shrine in Poland, with many Polish Catholics making a pilgrimage there every year. Often, people will line up on the side of the road to hand provisions to the pilgrims as those who walk the distance to Częstochowa walk the entire day and have little means to get things for themselves.