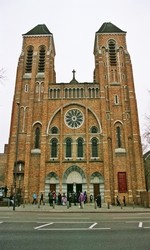 The current parish of St. Ignatius was set up in an era not long after Catholic emancipation, which saw rapid social change driven by industrial growth, urbanisation and immigration. Soon after Herbert Vaughan became Archbishop of Westminster in 1892 he was petitioned by nearly 300 people for a parish to be set up in the Stamford Hill area, where the population had greatly increased since the building of the suburban railways between 1871 and 1891. In response, Cardinal Vaughan invited the Society of Jesus (Jesuits) to open a parish, an elementary (primary) school and a secondary school for boys. For the Jesuits, this was a missionary endeavour – the development of a pastoral and social outreach to new communities with many needs and the eventual construction of community, church and school buildings on a landmark site. The first Mass was celebrated in Morecambe Lodge, a large house on the site of the present waste land. The following year, Burleigh House, the villa next door, was also bought. It was used to house the Jesuit community until the present presbytery opened in 1928.

A chapel was constructed out of stables, the coach house and stable yard of Morecambe Lodge, but soon it became clear that a proper church was needed. Largely for financial reasons, St Ignatius church was built in two stages. The first part, which included the sanctuary, was opened in 1903 and the building was completed in 1911.

The architect was Benedict Williamson, who was responsible for several other churches in the south-east of England. He said the church was designed in the spirit of the early Middle Ages, but with a view to the needs of the 20th century. The old churches of Spain, France and Belgium had a considerable influence on Williamson and the exterior of the church is faced in Belgium bricks similar to those used in the old churches of Bruges.

The interior embellishments of the church were not completed until 1925. There is some fine mosaic work to be seen in the Stations of the Cross, the Sanctuary, the Sacred Heart chapel and the Lady chapel. The chapel of St Joseph at the back of the church is dedicated to the men of the parish who died in the First World War and their names are inscribed on the front of the altar. The High Altar and the communion rails are also outstanding features of the church.

St Ignatius College opened in Morecambe Lodge in September 1894, but soon needed more space. Four classrooms were built at the end of the playground, but it was not until 1909 that the college was adequately housed in the new building facing the High Road. By the 1960’s it needed more room and it moved to Enfield in 1968, leaving behind the present St Ignatius Primary School, now entrusted to the diocese.

We are grateful to the dedication of so many parishioners who came before us and who have provided us with such a wonderful church in which we give glory to God. We now take up the challenge of renewing the fabric of this heritage and of continually renewing the faith of this community of believers.