A mid-Victorian, brick Gothic Revival church by Willson & Nicholl, built for a mainly Irish congregation. The church has largely unaltered interior, with rich and interesting decorative work at the east end. The tower was never completed, the present top stage being an addition of 1985. The church is attractively sited across the road from West Drayton Green and makes a notable contribution to the conservation area. 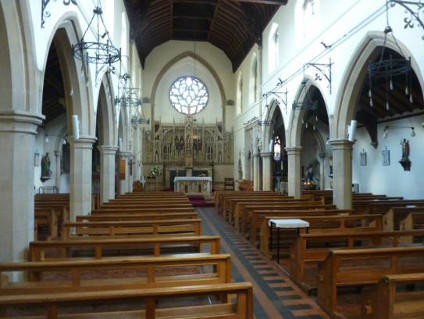 Built in 1869, chiefly, it is said, for Irish immigrants. The architects were T. J. Willson and S. J. Nicholl. The tower, which was intended to have a spire, was not completed; in 1985 the present top was added to finish it off (architect B.D. Kaye). The presbytery was built in the 1950s and the parish centre in 2010-11.

The church is oriented to the north so directions given are liturgical.

The church is built of buff stock brick in a Gothic style, drawing on motifs from the early fourteenth century. Covered with slate roofs, it consists of a five-bay aisled nave, two-bay sanctuary with a chapel on either side, and a northwest tower (which doubles as a porch). The west bay of the south aisle has been screened off to form a repository. The traceried Decorated fenestration is varied and includes a five-light west window, a circular window at the east end (with lovely flowing tracery), three-light reticulated windows at clerestory level in the sanctuary, and two- and three-light windows in the nave clerestory.

Inside, the walls are plastered and whitened. The nave arcades have octagonal piers and double-chamfered arches. There is no chancel arch and the division between nave and sanctuary is marked by thin wall-shafts carrying a small-scale hammerbeam truss. The nave has a pair of tie-beams, and scissor-bracing to the common rafters. Over the sanctuary is a seven-sided roof with an open central portion. In contrast to the relatively plain nave and aisles, the sanctuary and chapels are richly embellished (see below). The ceiling over the Lady Chapel has a traceried plaster ceiling.

The church is now Grade 2 listed.