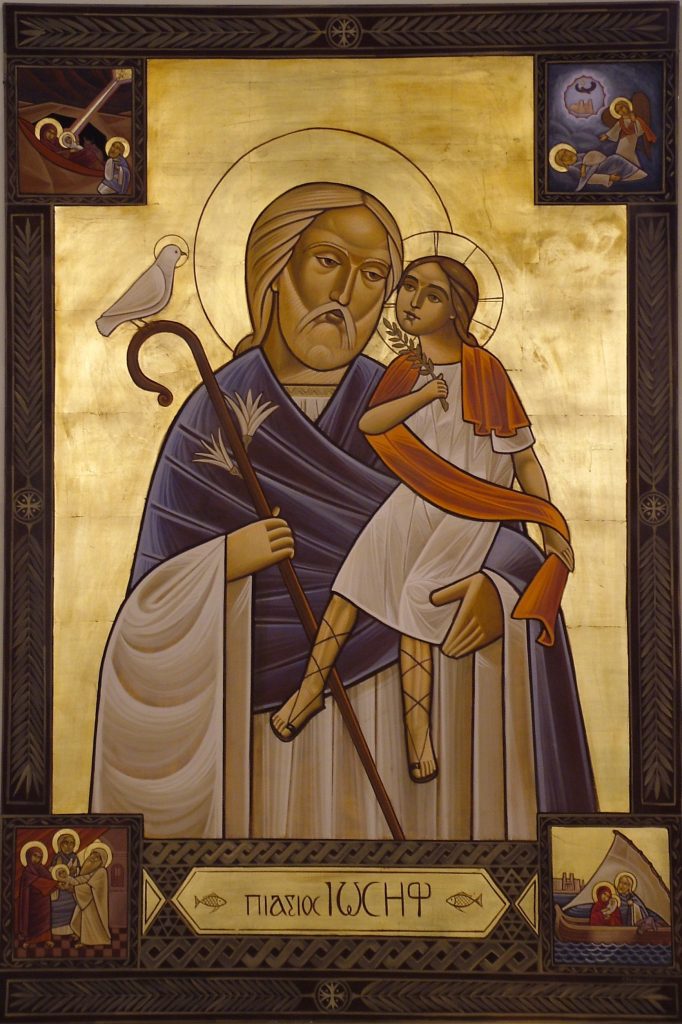 If you need someone to talk to or if you know of someone who would value a home visit from a priest or one of the parish Eucharistic Ministers, please ask at the church or at the Parish Office,

Each Sunday in school term time, children are invited to join the Children’s Liturgy group in the Parish Hall at 11.30am Mass.  Please ask at the church for details.  There are also special activities at Christmas and Easter.  See the Parish Newsletter for more information.

See Resources during Mass Suspension in the sidebar and also resources from The Centre of Liturgy at St Louis University – https://liturgy.slu.edu/

There are frequent social gatherings in the Parish Hall after Sunday Mass and at other times during the year, including an International Fiesta, Christmas Bazaar and Spring Sale.

Each Lent and Autumn we hold Saturday morning prayer and study groups with our Ecumenical Partners from the following local churches: 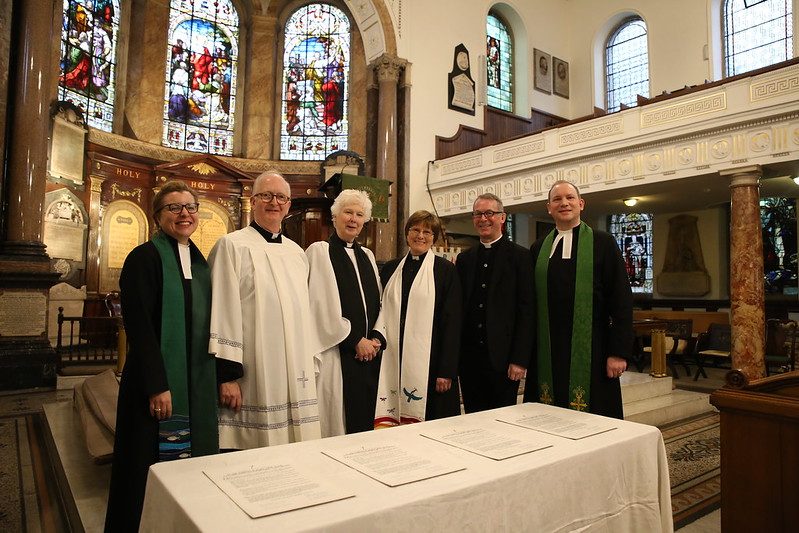 Local Ministers at the signing of the Ecumenical Partnership Agreement

Please read on to discover more about our faith story:

A small chapel in the basement of a former school of 1901. The church is the successor to a school-chapel of c.1850. It contains two important stained glass windows of the 1820s from the old St Mary, Moorfields, the original pro-cathedral of the diocese. Internal remodelling and the addition of a fine carved and pedimented entrance gateway date from 1993, and were carried out from designs by Anthony Delarue.

The site was bought in 1815 by the Associated Catholic Charities, who established an orphanage and schools. A school chapel dedicated to St Joseph was listed in the Catholic Directory from 1850. Apart from two years (185354) when the school and chapel moved to Sun Court, Golden Lane, the chapel has been on this site ever since. A new school and chapel building was opened on 1 December 1856. Designed by Edmund J. Kelly, it consisted of a chapel above two school rooms, all in plain Gothic. In 1901 this was replaced by the current chapel, located in the basement of a large new school block. This was a chapel of ease to St Mary Moorfields. The architect is not known, but George Sherrin, architect of the new St Mary Moorfields in construction at that time, may have had an involvement. St. Joseph’s, administered pastorally and sacramentally supported by the Parish Priest of St. Mary
Moorfields, is now the southern-most Catholic parish in the London Borough of Islington.

Although without a resident priest, the parish is a lively, socially-involved Catholic community, offering an inspiring model of lay involvement in and co-responsibility for the Church’s mission. Its Carmel-in-the-City spirituality group is a witness to being ‘at-prayer-in-the-city’. It has a strong ecumenical links in partnership with Wesley’s Chapel, St. Giles Cripplegate, Jewin Welsh Church, as well as local Quakers and Lutherans. The former presbytery now houses the City Pregnancy Counselling & Psychotherapy (CPCP) service. An award-winning Quiet Garden, in memory of Cardinal Basil Hume, is located between the former presbytery and church-entrance.

St Joseph’s School closed in 1977 and now houses the offices of the Catholic Herald newspaper. In 1993 the church interior was redesigned by Anthony Delarue ‘in a vaguely Florentine Renaissance manner … to bring beauty and a sense of holiness into the building’ (architect’s description, Church Building, 1995). The builders were Messrs Fetherstone Construction Ltd. Delarue also designed a classical doorway for the entrance stair to the church. The church was dedicated by Cardinal Hume on 14 October 1993.

The church faces east-west. This description uses conventional liturgical orientation, i.e. as if the altar was at the east end. The church is located within the basement of a large school building of 1901. This is built of London stock brick laid in English bond. The plan of the church is rectangular. On the south side of the building, near the southwest corner is a small bellcote, fixed at the level of the first floor. The church is accessed via a gateway and stairs at the southwest. The gateway of 1993 by Anthony Delarue has Doric pilasters, the Papal tiara in the pediment and a gable cross flanked by pineapples. Along the stairs down to the south door are wrought-iron crosses designed by Delarue and made in France. Above the entrance is a statue of St Joseph, given by St Mary,
Chelsea. This entrance leads into a small narthex at the south.

The interior is of the chapel is of six bays, as marked by the beams of the flat ceiling. At the northwest is a door to an internal staircase, opposite the organ (by Nicholson). Between the two west windows is a modern icon, Joseph of the house of David, near a statue of St Patrick. In the centre of the aisle stands an oval font of veined black marble with the inscription ‘Dominum Docis [sic] Prendergast ora pro illo’. The font is said to come from St Mary, Chelsea. Off the north side is a small Lourdes grotto (created in 1993) with a statue from the previous school building. The sanctuary has a timber altar and other matching modern furnishings in wrought-iron.

The easternmost windows on both sides have stained glass windows (1820s) from the old Moorfields pro-Cathedral (demolished 1899). They depict the Agony in the Garden (photo top right) and the Good Shepherd. Two others (the Descent from the Cross and the Death of St Joseph) were destroyed in the Second World War. Another stained glass window (the second from the east on the north side) of 1947 depicts St Anthony and is dedicated to the memory of the Brandi family. The other windows are filled with decorative leading and small panels of bottle glass.

A blind arch on the north side is filled with a large modern icon, Mary, Mother of the City. This and the other icon are the work of Stephane Rene. There is a statue of the Virgin on the north side, opposite a Sacred Heart statue. The floor is of woodblock. The Stations of the Cross are set high on the walls. They are modern Stations which in the 1980s replaced a set of nineteenth-century German Stations (Evinson).