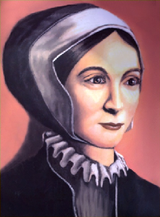 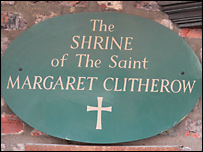 The Shrine to Margaret in The Shambles

It’s taken 422 years, but at last a plaque has been erected to Saint Margaret Clitherow, near the site of her execution. Known as ‘The Pearl of York’, she was canonised in 1970.

Margaret Clitherow was born Margaret Middleton in 1556 in York.

She was the daughter of a wax chandler and brought up a protestant, Margaret married widower, John Clitherow, in 1571.

She was just 15. They had a happy marriage and had several children. 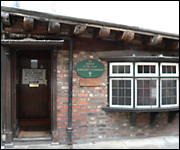 The Shrine to Margaret in The Shambles

John Clitherow was a butcher and his shop and house were in the Shambles, a narrow street of butcher’s and abattoirs in the centre of York.

He was a special constable, and ironically, assisted in finding Catholic priests and those hiding them.

Margaret converted to Catholicism in 1574, and her husband, who remained a protestant, was sympathetic to her beliefs.

Being a Catholic in Elizabethan times was a dangerous thing. Anyone celebrating mass was hunted down and risked, at best, imprisonment or, at worse, death.

Within a couple of years of her conversion, Margaret had become one of the leaders of the Catholic movement in York at the time. She helped and sheltered priests in the city, many of whom came from France and moved from place to place to avoid capture.

Priests and those who were caught hiding them faced the death penalty.

Margaret was imprisoned several times over the years and her husband was fined very heavily because of her actions, as was the case in those days.

Eventually in 1586, the Clitherow home was raided. The priest escaped but Margaret and her family refused to speak. A small boy staying with them was so frightened, he told the interrogators everything.

Priest’s vestments and communion bread were found and Margaret was arrested and her children never saw her again.

The plaque on Ouse Bridge

John Rayne-Davis from the Knights of St Columba, who have arranged for the plaque to be erected, tells us what happened at her trial:

“She refused to plead at her trial and the reason we think she did this, was it would in fact have endangered her husband’s life. He was helping her, even though he wasn’t a catholic. Also a number of her family might have been arrested and they could have faced the death penalty.

The humanity and holiness of this servant of God can be readily glimpsed in her words to a friend when she learned of her condemnation:

“The sheriffs have said that I am going to die this coming Friday; and I feel the weakness of my flesh which is troubled at this news, but my spirit rejoices greatly. For the love of God, pray for me and ask all good people to do likewise.”

Being pressed to death was a cruel and barbaric way to execute someone. Margaret was stripped naked and made to lie on the floor with a stone in her back.

A door was laid on top of her and piled with heavy stones. It’s thought she might have been pregnant and she took fifteen minutes to die, her last words being “Jesu! Jesu! Jesu! Have mercy on me.” 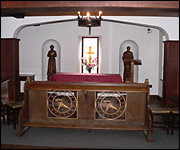 Interior of the shrine to Margaret

She was executed for being a Catholic, aged 30, in the tollbooth on Ouse Bridge, which was about 50 yards downstream from the present bridge.

It’s not sure what happened to her body, but in those days the graves of martyrs were prayed over. To avoid this happening to Margaret’s grave, it’s likely she was buried in secret on a rubbish tip.

Around six weeks after her death, it’s said that her body was dug up, her hand removed and her body buried with the reverence she deserved in a secret place. What is considered to be Margaret’s hand is now an important relic and is kept at the Bar Convent in York.

A plaque commemorating the life of St Margaret Clitherow has been erected on Ouse Bridge, as near as possible to the place where Margaret was martyred.

There is a shrine to Margaret in the Shambles, supposedly in the house she shared with her husband and children. However, the street was re-numbered in the 18th century, so it’s thought their house was actually opposite.

The shrine is looked after by St Wilfred’s Roman Catholic Church and is open to the public every day. Admission is free.

Margaret was canonised by Pope Paul VI in Rome on 25th October 1970.