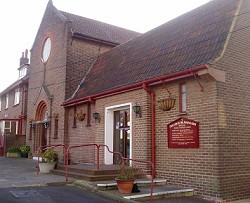 In the early 1920’s the Watling Estate was built and many catholic families moved from inner London to settle in Burnt Oak.

The nearest Catholic Church was either Mill Hill or Edgware and it soon became obvious a catholic church was needed in Burnt Oak and the money to build it came from an anonymous benefactor.

On May 10th 1928 the foundation stone was laid and the first mass was celebrated in June 1928 in a temporary chapel, later to be the sacristy, then a committee room and it is now the back of the Lady Chapel. The room only held 50 but there were 82 at the first mass and after that the numbers were so many, that the sacristy was moved to a builders hut.

In September 1928 Fr. Armitage was appointed Parish Priest and in October work was started on the presbytery.

On December the 15th 1928 the church was completed and was solemnly blessed by Fr Goggin, the area Dean, and used for the first time the next day, Sunday.

In June 1929 the presbytery was completed and in October 1929 the Solemn Opening of the church with the High Mass and a sermon preached by Cardinal Bourne.

At this time there were about 320 catholic families living in the parish so of course that meant a number of children, and the nearest schools were St Mary’s Hendon and St Vincents Mill Hill. It was clear that a school was needed in Burnt Oak.

In Orange Hill Road there was a very large property used by Graham White the aviator and rumour has it that Caruso once stayed there. This property was to become the home of the Dominican Sisters to whom Burnt Oak owes much to the work and help they gave to the parish. In the beginning the sisters went around the houses to find the catholic homes and in 1931 they opened a school next to the church for boys and girls of all ages, but as the numbers increased, work was pushed on with the building of the hall so it could be used for classrooms. But even that was not enough, a school was needed for the senior pupils and the sisters gave part of their grounds and St James was built. They also opened a private school in the convent which was now called St Roses.

Inspectors sent by the Ministry of Education to St James were greatly impressed by the standard of education of the fact that pupils could continue to study after the age of 14, normally only Grammar School pupils did this. They were also impressed by the courtesy and the friendliness of the pupils. For this we must thank the sisters.

In 1937 new sacristies were built joining the church to the hall as it is today.

We had all the guilds and societies that were usual in parishes at this time and from these came the people who volunteered with parish work.

During the second world war the streets close to the church were badly bombed which caused structural damage and the church was closed in June 1947 and reopened in October 1951.

Again the sisters came to the rescue and during the closure, Mass was celebrated in the Annunciation School.

Many plans and ideas were put forward for the reopening and the St Vincent de Paul sisters gave the life size statue of the Sacred Heart which is in the Church today.

Work started on the grounds of the church in 1952 a wire fence was replaced by a brick wall and pipes and woodwork were repainted. It just remained for the cross on the church tower to be gilded and floodlit, as a reminder to the people of Burnt Oak that God’s House stands in the midst of them. This was completed in time for Queen Elizabeth’s Coronation.

Many things happened in the Parish each year but the highlights were:

In 1943 Fr Smyth arrived in Burnt Oak as a curate. One of the ‘jobs’ in his care were the youth. He built up an excellent youth club that was recognised throughout the Borough. He took groups away on holiday, home and abroad and on Bank Holidays there was always a hike that ended in a cafe! In the 1950’s many Au Pairs came to England and again he saw the need to provide a place for them to meet with others and to sort out any problems they might have. Many marriages came from the youth club also lasting friendships which still exist today.

Fr Smyth was a man of many talents. He organized a Passion Play each year. It was done as a mime with music and parts spoken by club members. The part of Jesus was spoken by John Gregson, a local film star. He also organized ‘The Gondoliers’ and ‘Blossom Time’. These two productions and the Passion Play were a great way for the parish to keep together, because if you were not taking part there were costumes to be made, stage work and make up to be done.

We also had good football and netball teams and entered into the local sports and athletic competitions. Somewhere there must be medals and trophies to show how good we were!

Now at this time we only had a small hall and a tiny stage and an idea was formed to build a Parish Centre in the parish grounds and to enlarge the hall and stage and to lay a new floor for dancing. To raise the money for this there were many jumble sales, dances, christmas draws, bingo etc not to mention a loan or two and the generosity of the parishioners finally the Parish Centre you see today was built.

At this point can I take you back to the wartime. The parish grounds were dug out to provide underground shelters for the children of the Annunciation. At the sound of the siren the children ran with their gas masks to the shelters and if were down there more than an hour, we could have bread and jam. The sisters told us to pray to our guardian angels to keep us safe, and to pray for the people of Burnt Oak. I think that there was probably more prayers for bread and jam but we never got any! Those shelters are still there today or at least part of them and I did hear that after an appeal for a piano four or five turned up (in various conditions), the best was chosen and the rest put down the shelter and are still there.

The Parish Centre was a great success. We had a good social club where you could have a drink, play cards, chess or just talk, and when the stage was not in use for drama, it was a cafe for the youth club complete with Gaggia coffee machine, ham burgers and juke box.

But times change, and so do people. We have an excellent social committee who put together themed evenings, but they need more support. Perhaps people would rather stay in and watch television, perhaps they would like to come but are afraid to go out at night, but this is our parish, and like all good families it is good to come together.