The church is open for private prayer on Wednesdays

Exposition: Fri 11am-11.45am (except during Lent and the first Friday following Christmas and Easter)

Confession Sat 5.45pm-6.15pm and by appointment with the Parish Priest

Bank Holiday Mass Times are published in the newsletter

Changes to our services may occur due to funerals, school services or meetings of the Deanery so please check the newsletter for the latest information or call the Parish Office. Thank you.

A history of St Mary’s and ongoing projects

In June 1998, we celebrated the 200th anniversary of the foundation of St Mary’s catholic community in Chelsea with a Mass of Thanksgiving officiated by the late Cardinal Basil Hume. We completed an extensive and essential renovation of the 130-year old Rectory in 2007 to better serve the Clergy and community.

In the summer of 2014 works to improve the heating of the church were undertaken and we now have under-floor heating beneath a beautiful floor made of York Stone.  In 2016 the church kneelers were refurbished and in summer 2017, the works to replace our church lighting with a more energy efficient scheme were completed, along with the installation of CCTV.

Our next project will involve the cleaning of the interior stone columns and walls of the church and since 2015 a small, dedicated team of volunteers has been working on restructuring, re-planting and maintaining the garden. These projects, their financing and support, are at the top of today’s agenda.

If you would like to make a donation at any time towards the costs of these projects please click on ‘Donate to Our Parish’ or paste the following link into your web browser and follow the instructions:  https://parish.rcdow.org.uk/chelseastmary/donate/

You can also get in touch with the Parish Office via chelsea1@rcdow.org.uk or speak to the Clergy about making a donation. 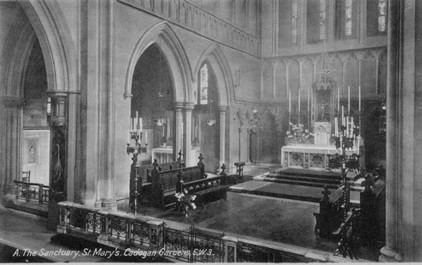 The origins of St Mary’s were close to the present church, on a ninety-nine year leasehold site at 105 Cadogan Gardens (then known as Cadogan Terrace). This is where, in 1812, the first Catholic Chapel in Chelsea, and one of the first in the country since the Reformation, was erected. It had been established by Abbé Jean Voyaux de Franous, who arrived in London in 1793. The Abbé had been given special charge of the spiritual welfare of the veteran soldiers at Chelsey Colledge (now known as the Royal Hospital and the home to the ‘Chelsea Pensioners’ – so conspicuous by their scarlet uniforms) as well as the soldiers at the Chelsea and Knightsbridge Barracks. He had launched an appeal for funds in England and in France to build the chapel which he intended to be primarily for the use of soldiers and the veterans of the Royal Hospital.

Land acquisition for the current site

When the Abbé died in 1840 after 40 years of service to his parish, his work was continued by many dedicated people including, especially, Joseph and Mary Knight. They planned a Catholic foundation in the parish and purchased, for £5,000, two and a half acres of land which had formerly been the Wellington Cricket Ground. This is now the Cadogan Street/Draycott Terrace site which contains the current Church together with St Joseph’s Primary School, St Thomas More Language College and the St Joseph’s Almshouses.

Theirs was a comprehensive scheme to build a church, a convent, schools, almshouses and a cemetery, resembling in some ways a mediaeval conception of parish life. These were mostly built in the 1845-55 period. Land was reserved for the new church, and this munificent gift made Chelsea into one of the most prominent parishes in London. The foundation stone of the present church was laid in 1877, and the church was opened and blessed by Cardinal Manning in May 1879. The new church was designed by John Francis Bentley (1839-1902), an English church architect and decorative designer, mainly for Roman Catholic clients. His chief work was Westminster Cathedral. The church was described as “externally of a very plain character in the severe style of the Early English architecture”, but the interior “…presents a bold and lofty appearance”. 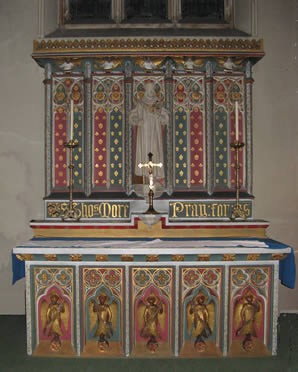 St Mary’s contains many monuments which belonged to the original Chapel, including the high altar and pulpit, which had also been designed by Bentley. The old Cemetery Chapel, now dedicated to Sir Thomas More, was incorporated in the church and also the Blessed Sacrament Chapel, which was designed by Edward Pugin. 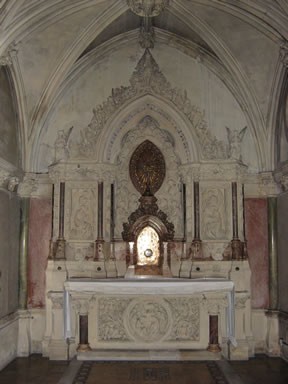 Another special feature of the church is the hanging rood which has a figure of Christ, robed and crowned and the symbols of the four Evangelists. There is a sculptured monument to the Abbé and the memorial tablets include one to Madame Tussaud, foundress of the famous wax museum. Oil paintings of Abbé de Franous and also Joseph and Mary Knight hang in the Rectory. 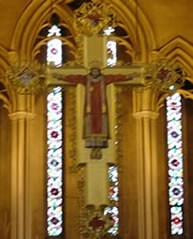 The parish of St Mary’s underwent a great change in the 1890s with substantial urban development in the immediate area, an increase in population, and the separation of the central part of Chelsea with the foundation of a new parish. Throughout the years, St Mary’s has always served a mixed and ever-changing population, English and non-English, from various walks of life, wealthy and poor – and, of course, the Royal Hospital veterans who now also have their own satellite Roman Catholic chapel in the Royal Hospital grounds.

Music has been a long established tradition at St Mary’s, and choral work, old and new, continues to this day. Another tradition, starting with the Abbé’s work, was to make appeals for the relief of the poor – now continued by our St Vincent de Paul Society.