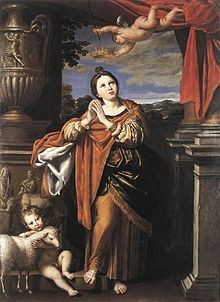 Agnes of Rome (c. 291 – c. 304) is a virgin–martyr, venerated as a saint in the Roman Catholic Church, Eastern Orthodox Church, the Anglican Communion, and Lutheranism.

She is one of seven women, excluding the Blessed Virgin, commemorated by name in the Canon of the Mass. She is the patron saint of chastity, gardeners, girls, engaged couples and virgins.

She is also known as Saint Agnes and Saint Ines. Her memorial, which commemorates her martyrdom, is 21 January in both the Roman Catholic calendar of saints and in the General Roman Calendar of 1962.

The 1962 calendar includes a second feast on 28 January, which commemorates her birthday. Agnes is depicted in art with a lamb, as her name resembles the Latin word for “lamb”, agnus.