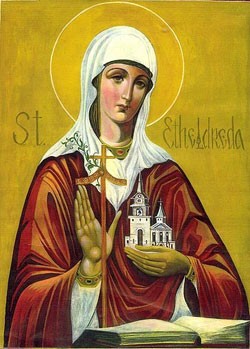 Princess Etheldreda, daughter of King Anna, a prominent member of the ruling family of the Kingdom of East Anglia, was born in 630. She wanted to be a nun but agreed to a political marriage with a neighbouring King, Egfrith, on condition that she could remain a virgin. When the King tried to break the agreement, she fled back to Ely, where, as well as founding a religious community, she also built a magnificent church on the ruins of one founded by the efforts of St Augustine himself but laid waste by war.

Etheldreda was quite a revolutionary. She set free all the bondsmen on her lands and for seven years led a life of exemplary austerity. After her death in 679, devotion to her spread rapidly, as people received help and favours through what they were convinced was her powerful intercession in Heaven. And when, through popular demand, it was decided to remove her to a more fitting tomb, it was found that even after 15 years in wet earth her body was still in a perfect state of preservation. When the Normans began building the present Cathedral at Ely and moved her body in 1106, it was again reported to be still incorrupt. That was nearly 450 years after her death.