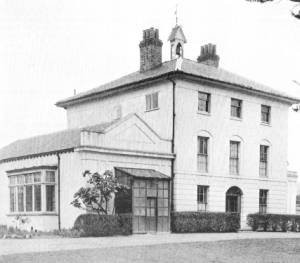 Our parish was founded on 20th April, 1912 with the arrival of three Claretian Missionaries from Spain, Fr. James Melis, Fr. Albert Lopez and Brother Raymond Tous. They were met by Fr. Anthony Pueyo, who had preceded them. He was the founder of the parish and was appointed the first Catholic Parish Priest in the area since the Reformation. They came to Hayes and settled in a house called “East View” in Station Road, Hayes, where the first Mass was said the following day, the feast of St. Anselm, Archbishop of Canterbury.

After a short time, the Missionaries purchased Botwell House with 4½ acres of ground, moving into this residence in September 1912. Cardinal Bourne sent his auxiliary, Bishop Butt, to officially establish the parish and bless the “drawing room chapel” on 6th October of that year. It had room for 60 people!

The first permanent building to be built was the primary school. It cost the small community the colossal sum of £9,640. The Sisters in charge of the school – the Poor Servants of the Mother of God – began their work in Hayes with 145 boys and girls on 25th August, 1931. The school hall served for Mass on Sundays and Holy days but at long last on 23rd May, 1954 Cardinal Griffin dedicated what has come to be called the intermediate church – the “drawing room chapel” serving as its sanctuary.

Secondary education was now tackled by the growing parish and in 1956, Our Lady & St. Anselm Secondary School – later known as Our Lady of Walsingham School welcomed its first pupils. This school, situated in Springfield Road, Hayes, carried on its work for 35 years. Many of its former pupils have moved on to successful careers and a lot still live and worship in our parish.

Our long dream of a permanent church became a reality on 2nd July, 1961 when the present church was dedicated by Cardinal Godfrey. It was consecrated by Cardinal Heenan and Bishop Mahon on 24th October, 1972 – our Diamond Jubilee Year. The intermediate church was enlarged and remodelled, becoming our Parish Social Centre. It was opened on 22nd April, 1967.