Our Lady Queen of All Creation
Sat Vigil 5pm, Sunday 10.30am (streamed on our YouTube channel) 12 noon

Church of the Resurrection
Thursday 10:00am (not streamed)

Weekday Masses at Our Lady - 10:00am (streamed on our YouTube channel)
Monday, Tuesday, Friday & Saturday

Confession
Available by appointment while under lockdown restrictions.

The Parish of Hemel Hempstead East came into being from the re-organisation of Hemel Hempstead parishes in January 2019 and comprises of two churches; Our Lady Queen of All Creation in Adeyfield, and the Church of The Resurrection in Grovehill.  Please be aware that some information searched for on the web may refer to the older parish divisions.

Our Lady Queen of All Creation

The current church building, easily visible as you drive into Hemel along the A414, was built in the late 1980’s and consecrated on the 13th November 1987.

This church building replaces one that had been built to serve the districts of Adeyfield, Leverstock Green and Bennetts End as part of the New Town of Hemel Hempstead in the early 1950’s.  After the Second World War, the government designated Hemel Hempstead as the site of one of its proposed new towns designed to house the population displaced by the London Blitz, since slums and bomb sites were being cleared in London.  Plans for the New Town were drawn up by the renowned architect and town planner, Geoffrey Jellicoe.  Through the late 1940’s and early 1950’s the town expanded rapidly with housing and a new industrial area. 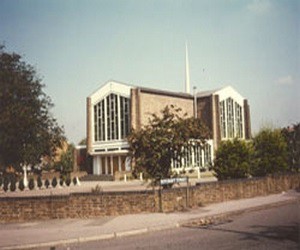 The first church on our site was an imposing building designed by the architect, Mr Archard.  It featured a large church topped out with a small ‘Hertfordshire’ style spire.  Sadly, it did not last, as the structure proved unsound. It was painful to have to pull it down. “We were married in that church” said one. “My children were baptised there” said another. Last of all to come down was the great altar mural of the ‘Coronation of Our Lady as Queen of Creation’ by R J Lloyd. That was in August 1985 – a sad day for him and for us.

While rebuilding work was in progress we moved into the old hall in Ritcroft Street, causing the realisation for a new church hall as well!   This was built adjacent to the church but expense forced us to leave its fitting out until money became available. The church was ready for use in November 1986 and was solemnly blessed by Bishop O’Brien in February 1987. Cardinal Hume came to consecrate it in November 1987.

Statues, Stations of the Cross, tabernacle, crucifix, confessional and other furnishings of excellent quality were salvaged from the old building. An organ was salvaged from the St Charles Borrameo’s church in Ogle St, London, and rebuilt by Vincent Woodstock of Redbourn in 1987. The stained glass window behind the altar was made by Brother Gilbert of Prink Nash Abbey, and installed in December 1990.

The Church of the Resurrection

Located in the centre of the Grovehill community, built as part of the expanded New Town Development in the 1970’s and the community hall, meeting rooms other community facilities all share the site.  The Church of the Resurrection is a shared church, shared with the Anglican / Free Church – they are a growing congregation which gathers for Mass at 9am on Sundays.

The architecture of the church is interesting with its sharply rising peak supporting an empty cross.  Inside, the sense of community continues with the congregation seated on chairs arranged in a broad fan facing the alter table and cross.  Again, the cross is empty.  The fact that the body of Jesus is not shown reminds the congregation of the name of the church, The Church of the Resurrection.

The interior of the roof is a striking timber clad that curves to a point above the cross.