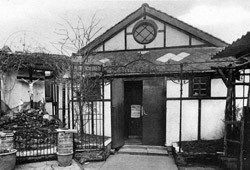 The ﬁrst Mass celebrated in Highbury was in 1918 in the Carmelite Chapel, Highbury Park. Soon local Catholics were coming to the convent for Sunday Mass and by 1920, a temporary church seating 140 parishioners was built on the site of our Community Centre in Kelross Road.

It was ofﬁcially opened in 1920 and is thought to be the ﬁrst church in the world dedicated to St Joan of Arc, who was canonised a few months earlier. 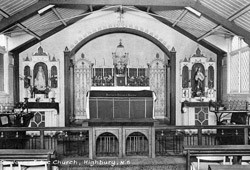 This ‘temporary’ church was used for the next 40 years, although it was necessary to expand it within 5 years to accommodate an extra 100 people. There was a huge inﬂux of Catholics to the area in the 1940’s and 50’s. Many were Irish and Italian immigrants, drawn to jobs created by the post war building boom, the new National Health Service and London Transport expansion. Our parish records show that in 1921 there were 25 baptisms; by 1961 that had risen to 292, when over 3,000 people attended the ten Masses that were celebrated each Sunday!

Construction of the present church

Plans for a new church and school on the site of the original Carmelite chapel were ﬁnally accepted in 1959. In October 1960 the builders moved in and Cardinal Godfrey laid the foundation stone on St Joan of Arc’s feast day on May 30th 1961. The solemn opening was celebrated with High Mass on 23rd September 1962. 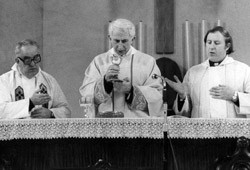 The church was designed to seat 750 and to convey lightness and space, the long, narrow shape of the plot dictating its unusual proportions. In the words of the architect, Stanley Kerr Bate, he hoped to build ‘a happy church’. The statue of St Joan of Arc located by the steps down into the nave was commissioned from renowned sculptor Arthur Fleishmann. He used the then new translucent material, Perspex to convey St Joan in armour that shines in daylight and glows when illuminated from within.

It was to be another 40 years before the church was ﬁnally consecrated. In commemoration of this, a new altar and tabernacle pedestal were designed by parishioner Ned Campbell and the church was redecorated. The Mass for the Consecration was celebrated on 14 June 2001, by Cardinal Cormac Murphy O‘Connor.

On 23 September 2012 we celebrated the golden jubilee of the present church, with the Archbishop of Westminster Vincent Nichols presiding at this important community occasion. The vision of the priests and parishioners who worked so hard to establish this monument to the glory of God has been realised in the ﬂourishing parish we have in Highbury today. 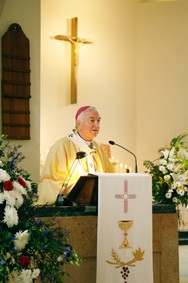 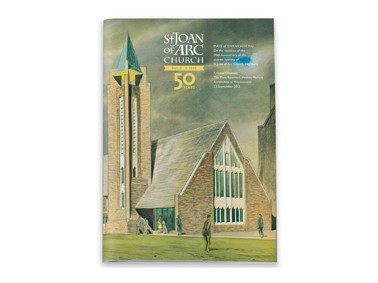