St. Joseph’s was established in the mid-1850’s, at a time when the relaxation of legal control over Catholicism was taking place. The Catholic community was expanding because of the railroads, but there was still considerable suspicion, resentment and open prejudice from the largely Protestant population of London, and indeed Highgate.

When Father Ignatius Spencer was seeking a home for the Passionists in London, the Old Black Dog Inn at Highgate seemed suitable, but could only be inspected by subterfuge. The Priests visited the property in disguise so they would be unrecognised – less than 10 years previously the owner had refused to sell the property as he dreamed that it would be bought by Papists, and at this time there had been an anti-Catholic riot in Highgate High Street. 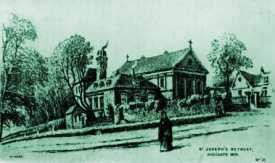 Buying the property at auction was only the first of the problems to be overcome, as the acquisition and construction needed to be funded, and at that time the funds did not exist!

Father Ignatius approached his nephew, the fifth Earl Spencer, to seek funds. He recommenced an annuity of £300 pa, which had been with-held by the family when the Honourable and Reverend George Spencer had converted to Catholicism.

Although Father Ignatius died in 1864 and did not see his work come to fruition, the local Catholic community grew rapidly, and a chapel attached to the old pub was replaced by a purpose built church in 1861, but even this became to small and so the work of building the current St. Joseph’s commenced on 24th May 1888. The construction was overseen by the enthusiastic Brother Alphonsus Zeegers, working in habit and stonemason’s apron. 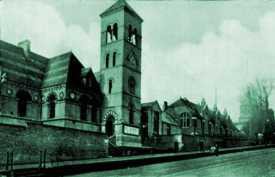 On the evening of 21st November 1889 the new church building was blessed by the Bishop of Liverpool, but this triumph for the community was matched by a burden of debt that would not be repaid for a further 43 years. On 28th April 1932, the debt having been finally cleared by the efforts of the community the church was finally consecrated.