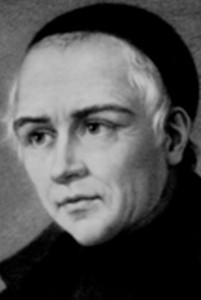 The Blessed Dominic Barberi CP was one of the glories of the Church in England. Born near Rome in 1792 and orphaned at a young age, he was denied a proper education by family circumstances, but received a divine intimation early in his life that he would one day work in Northern Europe and England. He joined the Passionists, faced and overcame continuing obstacles in the pursuit of his divine call, and finally came to England in 1841. He died in 1849 worn out with preaching missions and work for the return of England to christian unity. He is buried in the Passionist church in St. Helen’s, Lancs. During his life he received John Henry Newman into the Catholic Church. Beatified in 1963 during the Second Vatican Council. Another miracle is needed for his canonization.