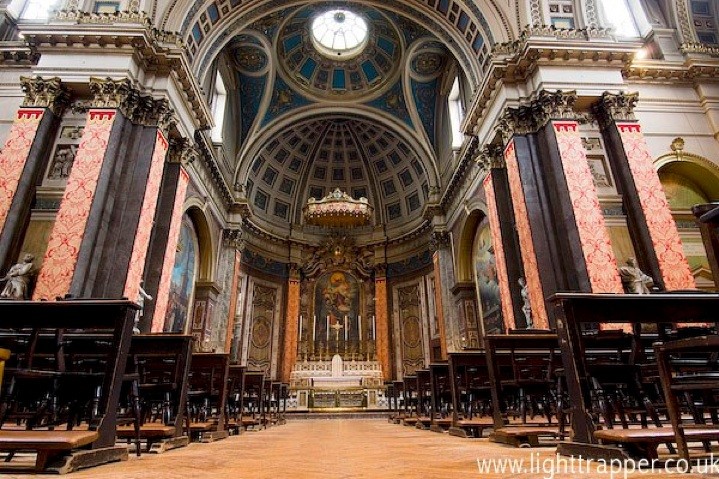 This famous Roman Catholic church was built between 1880 and 1884. It is the church of a community of priests belonging to the Congregation of the Oratory of Saint Philip Neri (Oratorians). Popularly known as ‘Brompton Oratory’ it is the second largest Catholic church in London, with a nave exceeding in width even that of St Paul’s Cathedral (Anglican).

St. Philip Neri (1515-1595) founded his Congregation in Rome and it has spread throughout the world, now numbering some seventy houses, and some five hundred priests.

Soon after converting to Catholicism in 1845, John Henry Newman became an Oratorian and brought St. Philip’s Oratory from Rome to England. The first English foundation was in Birmingham, then a further group of converts, including Father Frederick William Faber, founded the London Oratory. They began in converted premises, variously described as a whisky store, a gin shop and a dance hall, in King William Street, just off the Strand. After three years a property was found in Brompton on what was then the outskirts of London. It was a district of fields and lanes. Fr Faber described it as the ‘Madeira of London’. The house was built first, with a temporary church on the present site. To mark the silver jubilee of the founding of the Congregation an appeal was launched in 1874 to raise funds to build the present church. By March 1876 a design in the Renaissance style had been received from Herbert Gribble, a twenty-nine year old recent convert from Devon. His design having been judged the winner in a competition he was awarded a prize of £200 by the Fathers. The foundation stone was laid in June 1880 and the present neo-baroque building was privately consecrated on the 16th April 1884. A few days later Cardinal manning officially opened the Church and preached to a congregation which included 16 bishops and 250 priests. The church had cost £93,000 to build and in the following decade a further £14,000 was spent on the building.

The façade at the South end was not added until 1893 and the outer dome was completed in 1895-96 to a design of George Sherrin. The last major external work was the erection of the Newman memorial in 1896 (six years after his death).

The architectural style and the atmosphere of the church were deliberately Italianate, in order to bring St. Philip’s romanità to nineteenth century London. The present church was restored and redecorated to celebrate its centenary in 1984.

An Oratory is first and foremost a place of prayer. St. Philip attached great importance to the beauty of divine worship and the power of sacred music to raise our hearts to God, and the Fathers of the London Oratory try to maintain this tradition.

St. Philip was particularly devoted to Our Lady. He used to say “My sons, be devoted to the Madonna.” This is why the founding Fathers of the London Oratory wanted their new church to be dedicated to the Immaculate Heart of Mary.
St. Philip spent his whole priestly life in Rome, working tirelessly to help people of all types and all backgrounds to come closer to God. He devoted much time to helping the poor and the sick, both spiritually and materially. He became known as “the apostle of Rome.” May his prayers prosper his continuing work in London.