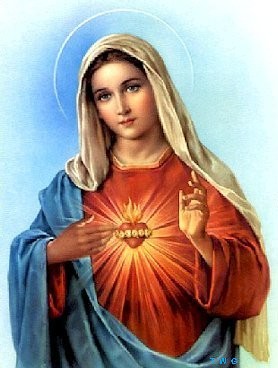 The Immaculate Heart of Mary is a devotional name used to refer to the interior life of the Blessed Virgin Mary, her joys and sorrows, her virtues and hidden perfections, and, above all, her virginal love for God the Father, her maternal love for her son Jesus, and her compassionate love for all persons.  The consideration of Mary’s interior life and the beauties of her soul, without any thought of her physical heart, does not constitute the traditional devotion; still less does it consist in the consideration of the heart of Mary merely as a part of her virginal body. The two elements are essential to the devotion, just as, according to Roman Catholic theology, soul and body are necessary to the constitution of man. In 1855 the Mass of the Most Pure Heart formally became a part of Catholic practice.

Eastern Catholic Churches occasionally utilize the image, devotion, and theology associated with the Immaculate Heart of Mary. However, this is a cause of some controversy, some seeing it as a form of liturgical latinisation. The Roman Catholic view is based on Mariology, as exemplified by Pope John Paul II’s Apostolic Letter Rosarium Virginis Mariae which builds on the total Marian devotion pioneered by Louis de Montfort.

Traditionally, the heart is depicted pierced with seven wounds or swords, in homage to the seven dolors of Mary. Also, roses or another type of flower may be wrapped around the heart.