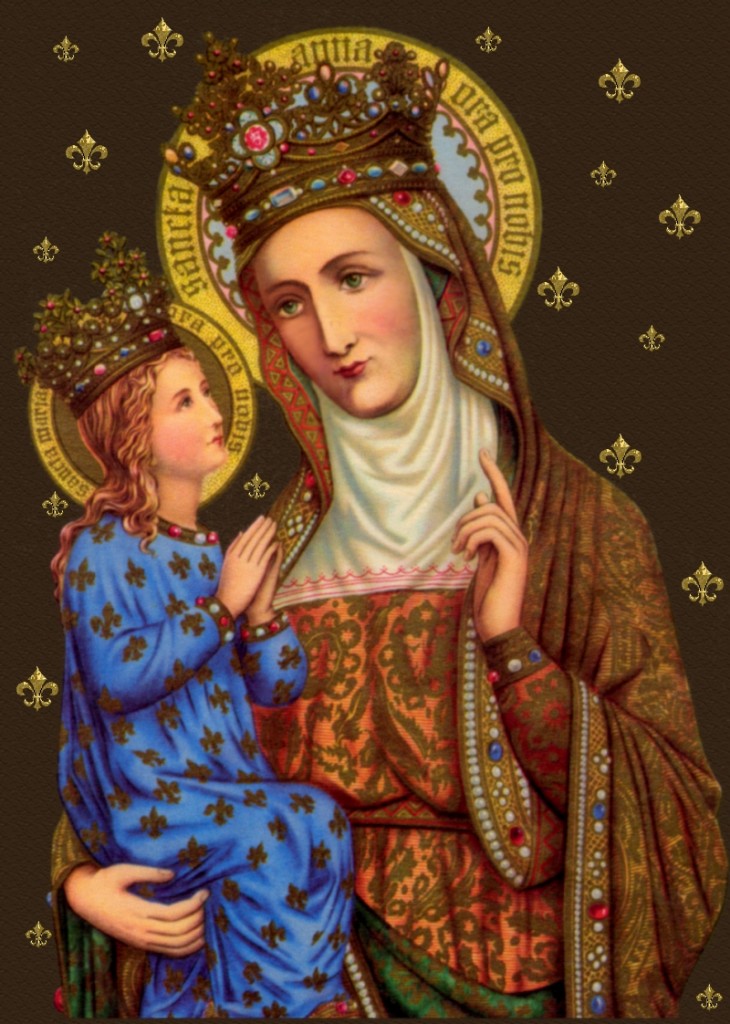 Tradition refers to St. Ann as being the mother of Virgin Mary. Although not written of in the Bible, Ann is given credence in the non-biblical gospel of James.

Saint Ann was born in Bethlehem and married Joachim from Nazareth in Galilee. Joachim was a shepherd given the task of supplying the temple of Jerusalem with sheep for sacrifices.

After twenty years of marriage Ann and Joachim had no children. Once, when Joachim overheard ridicule because of their childless state, he is said to have gone into the desert to plead with God to give them a child. After a time of fasting an angel appeared to assure Joachim he and Ann would be given a child they were to name Mary and dedicate to God.

In the meantime Saint Anne wondered where her husband had gone and in her despair at having been barren she prayed while she watched newborn birds in their nests in her garden. She cried out, “Why was I born, Lord?” That is when angel appeared to tell her she would soon give birth to a daughter she was to name Mary. The story continues with Ann and Joachim’s joyous reunion at the golden gate of Jerusalem.

After her birth Ann and Joachim dedicated Mary to God at the temple of Jerusalem and she spent much of her childhood there. When Mary was fourteen they betrothed her to Joseph of Nazareth and so Mary’s story continues with the birth of her son, Jesus, and his life on earth.

The life of Saint Ann and her connection as holy mother of Mary and grandmother of Jesus was very popular to early Christians. In the year 550 a church was built in honor
of St. Anne in Jerusalem. It is believed to be near where Anne, Joachim and Mary lived.

Since the Seventh Century the Greek and Russian Churches have celebrated feasts honoring St. Joachim and St. Ann. The Western Churches began to celebrate the feast of St. Anne in the Sixteenth Century.
The feast of St. Ann is July 26th (western) or July 25th (eastern calendar). There is no mention of Ann in the New Testament. The story of St. Ann comes chiefly from the Protoevangelium of James which only dated back to the second century.

St. Ann, patron saint of mothers and women in labor and minors, is symbolized by Mary in her lap holding the infant Jesus.