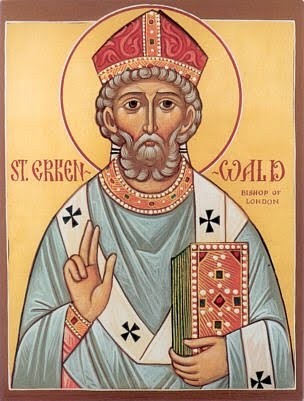 In the calendar of British saints, 24 April is the day we commemorate St. Erconwald (Erkenwald, bishop of London (ca. 693).

The icon image turns up on orthodoxengland and the WSIP, but without provenance. He is also one of the saints in the icon of the Synaxis of the Saints of London.

St. Erkonwald is said to have belonged to the house of Offa or Uffa, progenitor of the East Anglian princes, but he becomes first known to us as the founder of two religious houses, that of the Isle of Chertsey, in the Thames, for monks, in the establishment of which he was aided by the munificence of Frithwald, under-King of Surrey; and that of Barking, in Essex, for religious women. Over the first he presided himself, and he named his sister, St Ethelburga, the first Abbess of Barking. Both houses were governed according to the most exact rules of monastic discipline. About the year 675, St. Theodore, Archbishop of Canterbury, one of whose chief merits was the choice of holy men for the episcopal Sees, appointed St Erkonwald Bisbop of London, at the time when St Sebbi and Seghere were kings of Essex. He ruled his flock with the reputation of great sanctity, which was attested by many miracles. It is particularly recorded that the litter in which he was borne during his sickness was, even many years after his death, the channel of frequent cures of fever and other maladies. The epitaph on the ancient shrine of St. Erkonwald states that he was Bishop during eleven years. The festival of his deposition was kept on the 30th April, and that of the solemn translation of his relics, which took place in the year 1148, on the 14th November. When the shrine was plundered, at the time of the change of religion, the body of the Saint is said to have been re-interred near the east end of the choir.