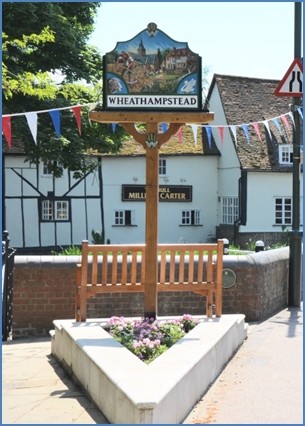 The name of Wheathampstead probably comes from, ‘wet homestead’. This fits the nature of the early settlement by the river with its water meadows, and also the traditional local pronunciation of the name as Whet rather than Wheat.A display in the St. Albans Roman museum states:

“For at least 100 years before the Roman Conquest in AD 43 this part of Hertfordshire was the heartland of a powerful and aggressive tribe known as Catuvellauni, Celtic for ‘expert warrior’….. The earliest capital of the Catuvellauni is likely to have been at Wheathampstead.

The start of the modern community of Wheathampstead is due to Anglo-Saxon invaders, the English as they became. In 1886 interesting remains of an Anglo-Saxon burial were found in Wheathampstead to which the probable date of 628-34 has been attributed.

‘Hwaethamstede’, as it was then spelt, is first mentioned in a surviving document which describes in great detail its boundary. In this deed (dated 1060) Edward the Confessor granted the estate to the Abbey of Westminster. Westminster Abbey divided their estate into two manors, one being Wheathampstead.

The first continuous settlement in the area was around St. Helen’s church and the ford by the Bull Hotel and the mill. The Domesday Book recorded that Wheathampstead Mill existed by 1086”.