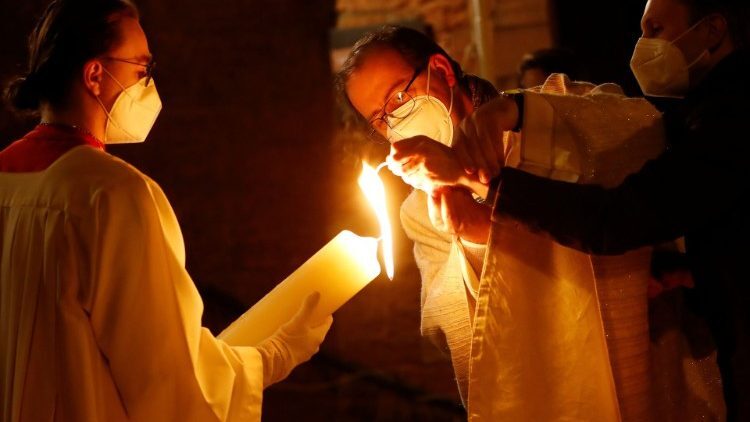 The Holy See hosts a press conference to announce a Symposium on the theology of priesthood, which will seek to explore the relationship between the ordained priesthood and the priesthood of all the baptized.

The Vatican will host a Theological Symposium on Vocations on 17-19 February 2022, entitled “Toward a Fundamental Theology of the Priesthood”.

The event was presented on Monday at the Holy See Press Office by Cardinal Marc Ouellett, Professor Michelina Tenace, and Father Vincent Siret.

The trio presented reports with the background and goals of next year’s Symposium, which will address the issue of clerical celibacy in the Latin rite and the priesthood of the baptized.

Each of the three days will focus on a different theme. The first day will be dedicated to “Tradition and New Horizons”, the second to “Trinity, Mission, and Sacramentality”, and the third to “Celibacy, Charism, and Spirituality”. A different Cardinal will preside over the reflections of each half-day, and Pope Francis is expected to offer participants a message at the end of the Symposium.

Cardinal Marc Ouellett, Prefect of the Congregation for Bishops, kicked off the press conference, linking its timing to the upcoming Vocations Sunday, on 25 April.

He said the decision to hold the three-day Symposium was not taken lightly, given the health crisis set off by the pandemic. But, added Cardinal Ouellett, there is a certain urgency to explore the theology of the priesthood, especially after the recent Synods on the family, young people, and the Church in Amazonia.

“The time has come,” he said, “to prolong the reflection and to promote a vocational movement facilitating the sharing of the various Church experiences all over the planet.”

Cardinal Ouellett said Pope Francis has often repeated his remark in 2015 that “the path of synodality is the path that God expects from the Church of the third millennium.”

Synodality in connection with vocations, he added, requires “close collaboration between lay people, priests and men and women religious, for the proclamation of the Gospel to the world through the attractive witness of Christian communities.”

He said the Symposium will seek to discover a “renewed vision” and “a way of valuing all vocations while respecting what is specific to each.”

Professor Michelina Tenace, who teaches theology at the Pontifical Gregorian University, described the urgency of the issues being addressed.

“We see today that in many parts of the world, bishops and priests are struggling to identify the changes required for a priest to truly be a sentinel of the Kingdom of God,” she said.

So, she added, the Symposium will explore the foundation which links the ministerial priesthood to the priesthood of the baptized.

This, she added, means that the community of the baptized and priests share a mutual responsibility.

The Symposium will also address the theology of vocation, priestly celibacy, and the relationship to the sacred.

Professor Tenace said each vocation builds up the Church in its own way. When priesthood is properly understood, she said, the danger of clericalism can be avoided, because the priesthood is identified with service rather than power.

She noted that formation in seminaries is “often very poor precisely in discernment of vocation and formation in the life of communion.”

Seminary formation, she added, should help make the seminarian aware of the gift of celibacy, which is required in the Lain rite “as a prophetic witness of Christ’s priesthood”.

“The Symposium,” said Professor Tenace, “will help us understand that the crisis of priestly identity or of vocations” affects “the ongoing transformation of the whole Church as a body animated by the sap of the Spirit.”

Fr. Vincent Siret, the Rector of the Pontifical French Seminary, invited all seminary formators to follow next year’s Symposium as a way to help candidates for the priesthood to grow into good priests.

Reflecting on the theology of the priesthood, he said, will help seminarians understand the Latin Church’s requirement of celibacy and “to make a commitment with full knowledge of the facts.”

“The consecration of one’s entire life involves the entire person and can only be justified through a self-giving perspective of following Christ in a Trinitarian dynamic,” he said.