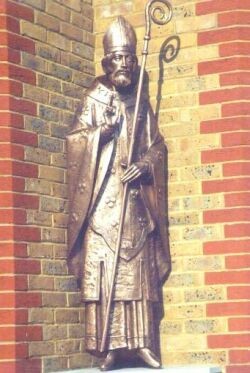 The patron of our parish, St Edmund of Canterbury (also referred to as St Edmund Rich), was born in Abingdon about 1170 of a prosperous family. After an education at the universities of Oxford and Paris, he was ordained a priest, and returned to Oxford to teach theology there. He gained a great reputation for both scholarship and holiness. In 1222 he was appointed the administrator of Salisbury cathedral, from where he was elected Archbishop of Canterbury.

He was valued by the local people for his teaching and preaching, his study and his prayer, but his uncompromising stand in favour of good discipline in both civil and Church government, of strict observance in monastic life, and of justice in high quarters brought him into conflict with King Henry III, with several monasteries and with the priests of Canterbury cathedral.

He journeyed to Rome to appeal for the Pope’s support, but on a second such journey he died at the Cistercian monastery of Pontigny in Burgundy, where on his deathbed he called God to witness, “I have sought nothing else but you, O God.”