St Aloysius is a church of the mid-1960s which replaced one of the earliest churches of the Catholic Revival in London.  The modern design with its conspicuous brick drum is effective both externally and internally and the building has retained most of its original 1960s fittings.

In the late eighteenth-century the district of Somers Town, which was just then being developed, became something of a centre for French émigré clergy. A chapel was established here in 1798 by Abbé Chantrel which was replaced in 1808 by a new and larger building in the Classical style erected for Abbé Carron in Phoenix Road. By the 1960s a larger church was needed.  The present site next to the old church was given by the French religious order of The Faithful Companions of Jesus and their new convent was built on the site of the old church and presbytery.  The new church, with a hall and youth centre beneath and presbytery attached was designed by A. J. Newton.  The natural level of the site was some six feet below pavement level and was exploited to provide a parish hall and some car parking space underneath the church. 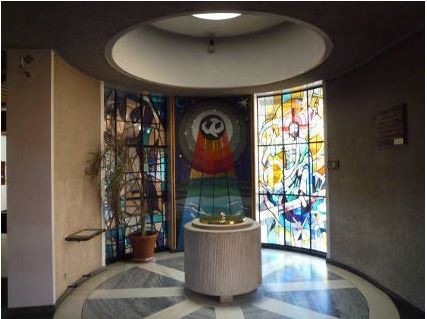 The church occupies an irregular site, largely enclosed on three sides with its principal frontage to Phoenix Road and a smaller frontage to Eversholt Street. The main body of the church consists of an elliptical brick drum with a continuous concrete clerestory set on a raised flat-roofed brick podium, which is bookended by the taller presbytery and narthex. The juxtaposition of straight and curved elements is effective. There is a broad flight of concrete steps to the main entrance at the right hand end of the podium, with a sunken area to the remainder allowing light to the windows of the lower hall. There are four large rectangular windows in the main front elevation of the podium with a small copper drum over the baptistery next to the entrance. 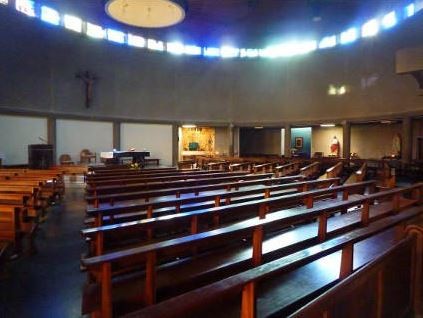 Internally, the glazed narthex leads directly into the body of the church.  The space under the drum contains the sanctuary and the main seating area and is supported on concrete columns with a continuous ambulatory, off which open the Lady Chapel and Blessed Sacrament Chapel, the baptistery and the confessionals.  The floor of the church is Genoa Green terrazzo, the walls are faced with grey Tyrolean plaster, the ceiling of the drum has Parana pine boarding. To the right of the sanctuary is a recess for the reserved sacrament with a ceramic mural by Adam Kossowski. There are several fibreglass statues by Gordon Bedingfield. The small early nineteenth-century chamber organ was presumably brought from the old church. The drum clerestory has abstract stained glass by the Whitefriars studio, who also provided the baptistery window.  The large windows in the north wall depicting the Glorious Mysteries of the Rosary are by Goddard & Gibbs, added in the 1990s. The wooden benches are original.