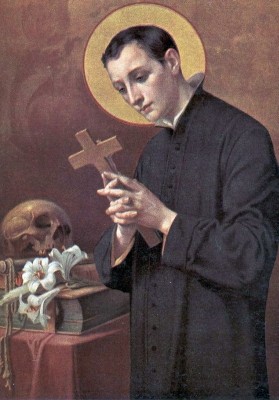 St. Aloysius was born in Castiglione, Italy on March 9th 1568. The first words St. Aloysius spoke were the Holy Names of Jesus and Mary.

He was destined for the military by his father (who was in service to Philip II), but by the age of nine Aloysius had decided on a religious life, and made a vow of perpetual virginity. To safeguard himself from possible temptation, he would keep his eyes persistently downcast in the presence of women.

St. Charles Borromeo gave him his first Holy Communion. A kidney disease prevented St. Aloysius from a full social life for a while, so he spent his time in prayer and reading the lives of the saints.

Although he was appointed a page in Spain, St. Aloysius kept up his many devotions and austerities, and was quite resolved to become a Jesuit. His family eventually moved back to Italy, where he taught catechism to the poor.

When he was eighteen, he joined the Jesuits, after finally breaking down his father, who had refused his entrance into the order.

He served in a hospital during the plague of 1587 in Milan, and died from it at the age of 23 in 1591, after receiving the last rites from St. Robert Bellarmine.

The last word he spoke was the Holy Name of Jesus. St. Robert wrote the Life of St. Aloysius.