Our parish of Ss Alban & Stephen is in the City of St. Albans and is one of seventeen parishes in the St Albans deanery.  It’s one of two parishes serving the City of St Albans, the other being St Bartholomew’s parish.

With over 1,500 regular attendances at Sunday Mass, and with five masses every Sunday (including the Saturday vigil) in the Church, plus one at each of two mass centres, it is one the three largest parishes in the Hertfordshire Pastoral Area. The St Albans deanery is one of five deaneries in the Pastoral Area of Hertfordshire which in turn is one five Pastoral Areas in the Diocese of Westminster. Despite being part of the Diocese the parish of Ss Alban & Stephen is served by priests from the Order of the Missionaries of the Sacred Heart 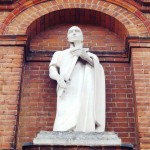 The parish “began” in 1840, although Mass was initially celebrated at a number of makeshift and temporary locations, including the White Hart pub! The church as we know it today was built in 1904. When the nave was completed the church was dedicated and blessed by Most Rev. Francis Boume, Archbishop of Westminster on New Year’s Day 1905. Building work carried on from time to time up until 1966, when the side aisles were added, the Church was lengthened back towards the railway, and the tower was added. In 2005, Cardinal Cormac Murphy-O’Connor led us in our celebration of the centenary of that pivotal event in the history of the parish. At the start of a new millennium the Catholic community has become an integral part of the religious, civic and social life of St Albans. From our small beginning we now have a splendid church, five schools to nurture our children, an incredibly evangelistic parish, as this website shows, and a wonderful history of Christian witness and public service.