A Gentle REMINDER to you ALL!!

THE CHURCH IS OPEN for Masses at WEEKENDS and during the WEEK too.

If you do wish to come to Mass at weekends, please remember to book a place as it is mandatory for Track and Trace purposes. Just click on EVENTS and follow instructions. Also remember: not to sit, or interact with anyone outside of your household or bubble. This goes for outside the church as well as inside. Let us all continue to pray for an end to this pandemic and make sure that we all do our best to keep everybody safe.

WEEKDAYS MASSES
Every Week a different timetable will be published indicating DAY & TIME when Mass is celebrated in the church. Therefore, it is very important that, if you wish to attend Mass on weekdays, you check first the newsletter to know if there is Mass on that day. For weekdays Masses there is no need to book a place. However, you may be asked at the church's entrance to provide your name and contact for Track and Trace purposes. Thank you for your understanding.

CONFESSION
If you wish to make your confession with Fr Fortunato please do contact him via email at fortunatopantisano@rcdow.org.uk
Or speak to him after any Mass to make arrangements.

Joint statement on the vaccine by the “Faith Leaders” of different boroughs.

Covid-19 and the vaccine a Video from Fr Albert Ofere and a picture of the Cardinal receiving his jab at https://rcdow.org.uk/news/receiving-the-covid-19-vaccine/

We are aware that questions are being asked as to why churches remain open during this National Lockdown. We are also aware that many local authorities are calling for places of worship to close. We wish to respond to these concerns.

Churches are allowed to open for prayer and communal worship at this time according to the provision of the most recent national legislation and Government guidance.  This decision is based on two factors: the recognition that our churches are safe, and that the service they offer is essential.

The safety of our churches has been affirmed by Public Health England in its current advice to the Government. This is publicly recognised to be the result of the great efforts made by many people in the implementation of procedures mandated by PHE and thereby establishing the necessary conditions within churches for their safe use.

Our churches are making a significant contribution to the personal resilience and inner strength of people which is much needed at this time. Many are hubs from which essential support is offered especially to those most in need, extending well beyond the faith communities which use them. This includes the regular provision of food; the care of the homeless; and being a place of peace and reflection (which is safe) for many whose living conditions are very limited. This will become more appreciated as the programme of vaccination increases. The vital link between prayer and action is important to maintain this service.

At this phase of the pandemic, which is causing alarm and fear, our churches will exercise their role with increased diligence to ensure continuing safety and service.

Our clergy will ensure that all are aware that there is no duty or responsibility to come to church and communicate to all there is no obligation to attend Mass on Sunday. They will review, in each local area, the provision offered by the church in order to ensure that the highest standards of safety are maintained. This will include a review of the role of stewards, the provision of additional social distancing within the church, a review of cleansing routines, and consideration of the personal circumstances of the priest(s) and people. On this basis there will be a local evaluation and decision about the possible reduction in the times of opening and the frequency of communal worship.

In conclusion we recognise the higher levels of fear and anxiety which the new strain of the virus has prompted and we have a very proper awareness of the care which must be exercised by everyone, under the guidance of PHE health professionals.

We recognise, too, that isolation is having a profound detrimental effect on people and that the role of churches in easing that isolation in ways which are safe and supportive has been recognised as a positive and beneficial contribution to the common good.

We pray for the dedicated work of the NHS and continue to provide spiritual support to staff and patients through the network of chaplains working both in the hospitals and the community. 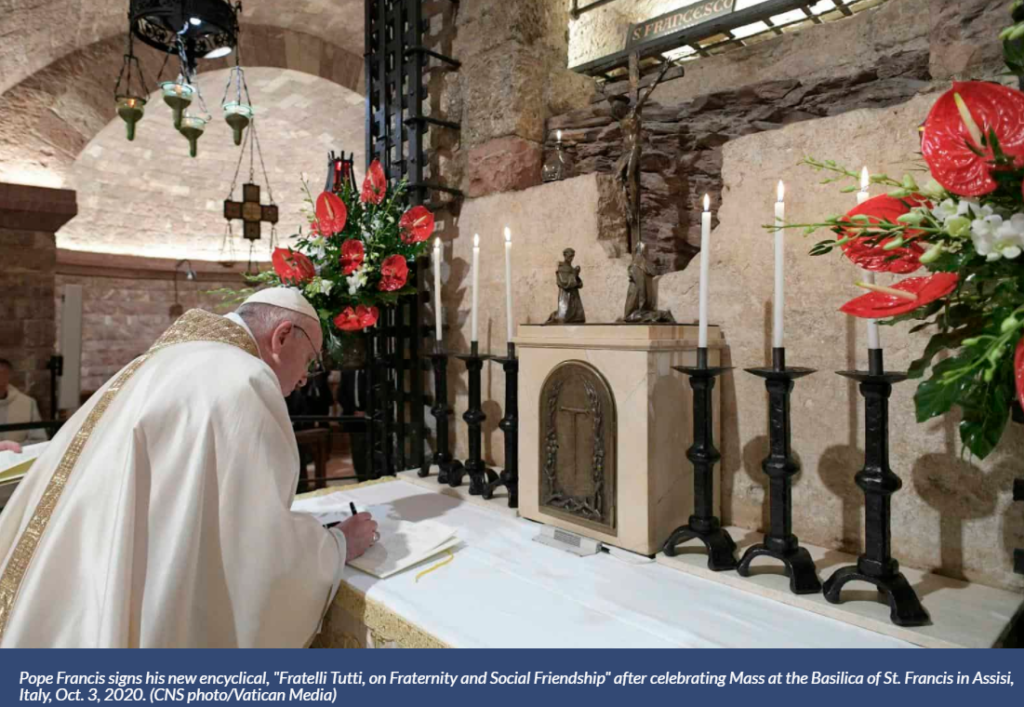 The modern generation must take up the struggles of the past for the sake of a better world urges the pope in a wide-ranging review of where the human family has got to and where it now needs to go in these new and demanding times.

`The pandemic might just be a time when we realise that we need one another. The suffering caused by Covid 19 challenged our society and our consumer life-style. If we did not seize this opportunity created by such “immense sorrow” to “rediscover once and for all that we need one another” then  “the notion of ‘every man for himself’ will rapidly degenerate into a free-for-all that would prove worse than any pandemic.”

Goodness, Pope Francis says in his latest encyclical, out this month,  together with love, justice and solidarity “are not achieved once and for all they have to be realized each day.”

The pope says that the Internet has made us all neighbours but not brothers and sisters,.“We are more alone than ever” he writes in Fratelli Tutti, a 90 page document he signed off on at Assisi  on 3 October, the vigil of the famous medieval saint. Instead of true brotherhood and a sense of belonging to one human family who are all in the same boat we are hiding behind walls of our own making.

There are powerful economic and political forces that are “deconstructing” our sense of our history. Even words like ‘democracy, freedom, justice or unity’ are loosing their original meaning and being used against us. Despair and the harsh criticism of others is being deliberately spread as a way to get control over us.  Everywhere people’s jobs are at risk for the sake of reducing costs. Policy-makers claim that poverty is being banished. But true poverty was not banished  because modern life was different -for instance, it didn’t matter in the past that you couldn’t get electric power because it did not exist, now it does and if you can’t afford it you suffer. People are important and their importance was not to be measured by “populist” opinion and policy. Human beings had an absolute value and dignity which no-one and no policy could override.

The pope warns Christians not to think of migrants as less being less “worthy, less important, less human” and rejects policies that turn them away. They were right to seek better conditions for themselves and their families in new countries, he says.

He also has the digital revolution in his sights. It was not the answer to our need to communicate and wouldn’t unite us because we needed to see people face to face, “even the smells, the trembling of the hands, the blushes and perspiration that speak to us and are a part of human communication.”

He warns against getting involved in defamation and slander on the net and says we are getting isolated from the real world. Instead we must be a people of hope.

“Hope is bold; it can look beyond personal convenience, the petty securities and compensations which limit our horizon and it can open us up to grand ideas that make life more beautiful and worthwhile.

The pope also rejects the ancient doctrine of a “Just war”: modern warfare was indiscriminate and so destructive that it could never be justified. He rejected capital punishment or imprisoning people for the whole of their lives.  And in an extended analysis of the story of the Good Samaritan who cared for the stranger in need he says “ love does not care if a brother or sister in need comes from one place or another. For ‘love shatters the chains that keep us isolated and separate; in their place it builds bridges’ Love enables us to create one great family, where all can feel at home.”

The pope ends his encyclical by reaffirming a declaration and an appeal for fraternity, world peace and living together that he made last year in Abu Dhabi with the Grand Iman Ahmad Al-Tayyeb. Religions should never incite war or bloodshed they declared, “God the Almighty has no need to be defended by anyone and does not want his name to be used to terrorise people”