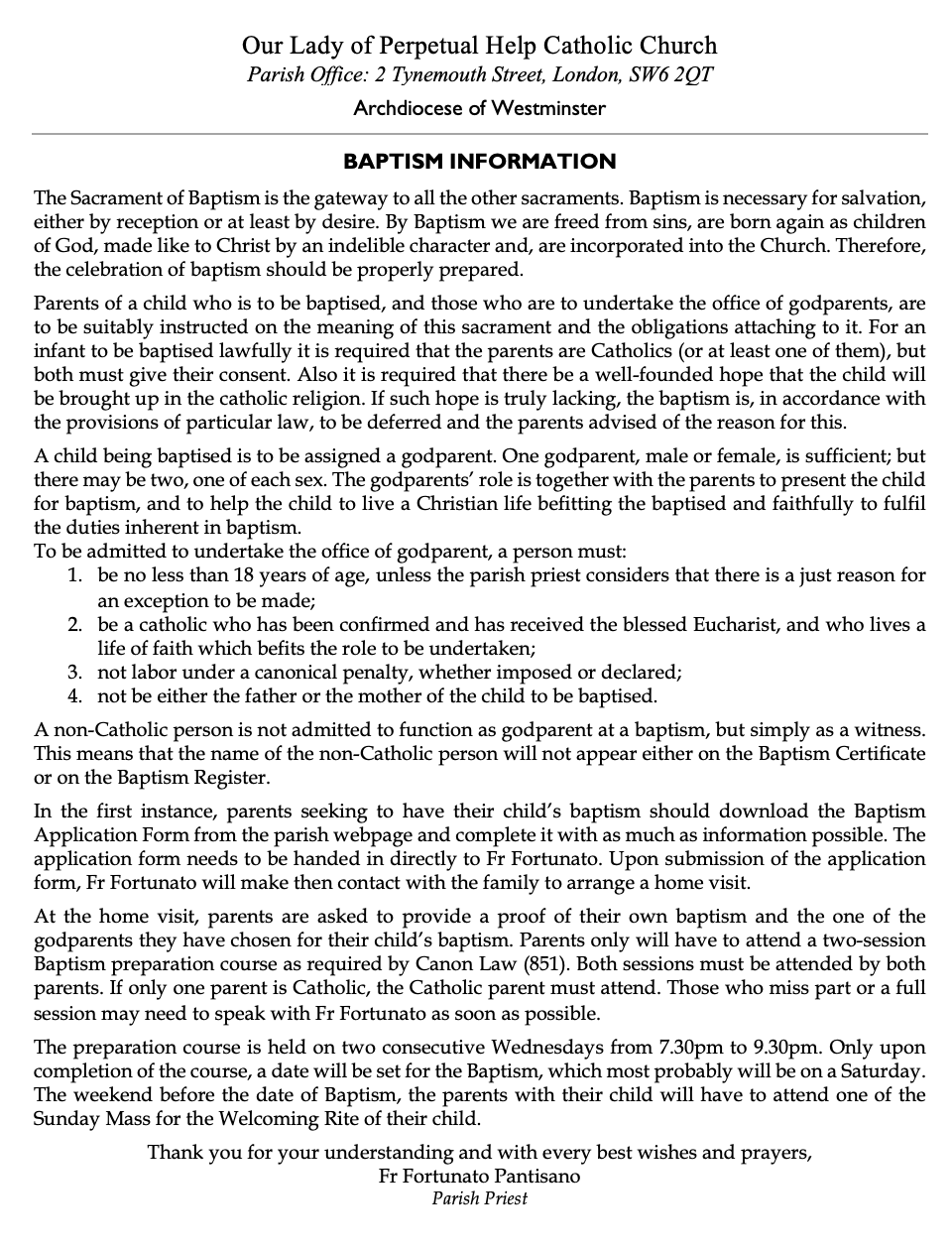 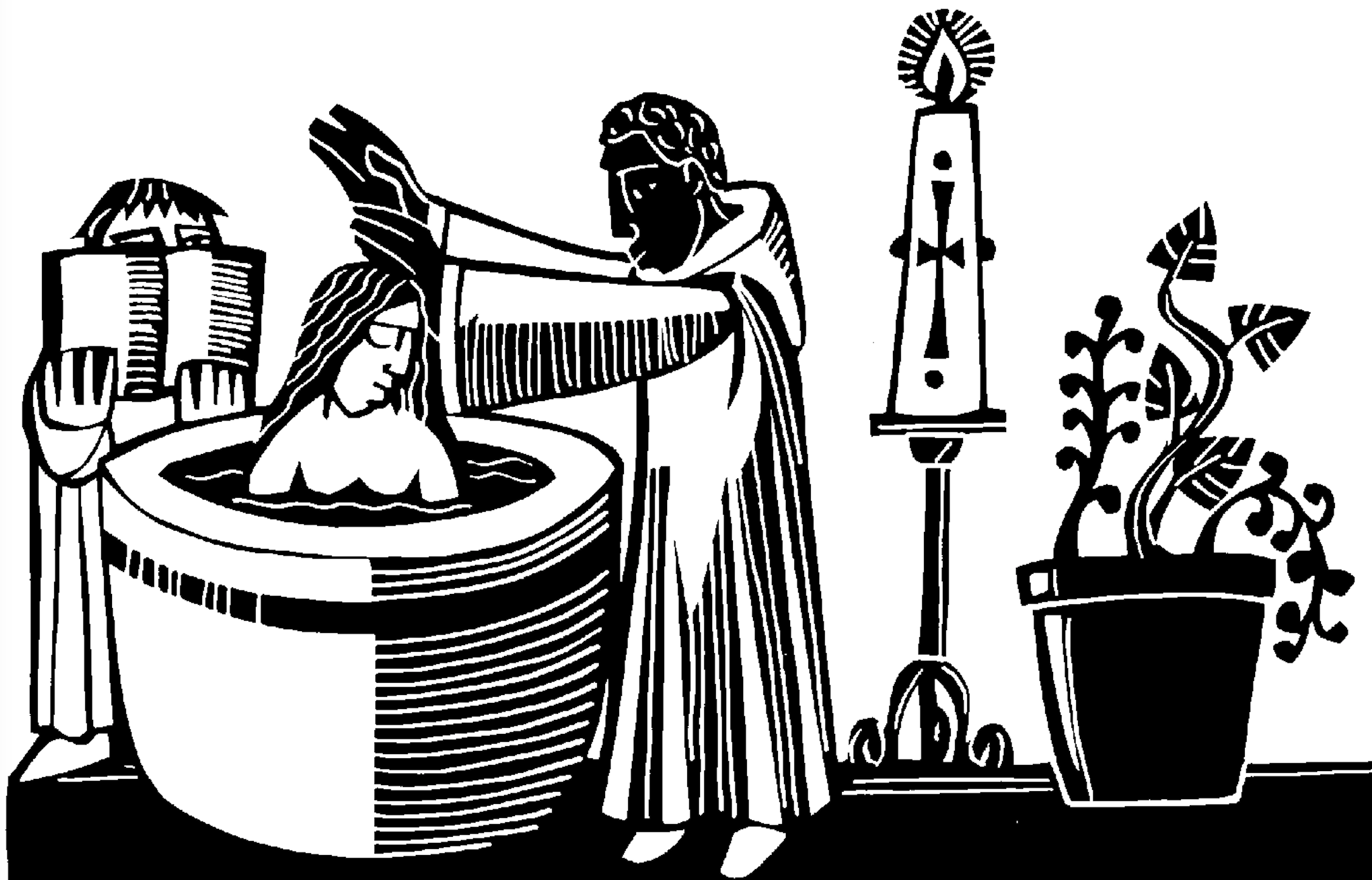 The sacrament in which, by pouring water upon a person, or immersing in water, and using the words “I baptise you in the name of the Father, and of the Son, and of the Holy Spirit”, the one baptised is cleansed of Original Sin and (in the case of one who has reached the age of reason) of actual sins, is incorporated into Christ and made a member of His Body the Church; he/she is infused with the sanctifying grace and receives the gifts of the Holy Spirit and the theological virtues of faith, hope and charity.

The word ‘baptism’ comes from the Greek word ‘baptizein’meaning to dip or immerse.
• In the time of Jesus total immersion was carried out by some Jewish groups as a sign of ritual cleansing. One of these groups was the Essenes, of whom John the Baptist was thought to be a
member.
• The last thing Jesus said to his apostles was to “go . . . And make disciples of all the nations baptising them…” Mt. 18:19
• The Acts of the Apostles, tells us this is what they did –beginning on the day Pentecost after Peter’s address to the crowds. Acts 2:37-41
• It was adults who had expressed their faith in “Jesus as the Christ” who were baptised although there were some accounts of entire households such as the gaoler at Philippi Acts 16:25-33 and the entire household of Lydia. Acts 16:11-15
• Baptism was a new beginning and baptism brought about a real change in people’s lives. One example is that of Saul – who became Paul.
• As it grew, the Christian Church became a victim of persecution and hostility. A simple profession of faith in Jesus Christ no longer sufficed for those who wanted to become members of a Christian community – which was now keen to test the seriousness of those who were interested.
• First of all, people had to find a sponsor from the community who would present them for baptism after a period of preparation that lasted two to three years. In that time, the sponsor could ascertain whether the candidate was determined to change their way of life – hence their formation was more ethical than doctrinal.
• The third century document, Apostolic Tradition of Hippolytus, talks of this three-year period of preparation – but says it is not the time that is judged but the conduct.
• This time became known as the catechumenate and those wishing to join the Christian community were known as catechumens – a Greek word meaning “instruction”.
• Thus, in the first 200 years of Christianity, things had changed.It was no longer baptism immediately after conversion. It took three years of preparation by members of the community.
• Baptism had also become an annual celebration – linked toEaster – thus strengthening the theological link with the idea of death and resurrection to new life through the sacrament.
• By the sixth century, the baptism of infants whose parents were Christians had become the norm. There was a shift, too, in the sacramental emphasis with baptism seen as the washing away of    original sin and the promise of eternal life. The emphasis had moved away from the beginning of a new life in Christ.
• At the time, infant mortality was high, and bishops began to encourage parents not to wait for the Easter Vigil but to have their infants baptised very soon after birth to save them from dying still   stained with original sin.
• The Second Vatican Council had an important effect on how the sacrament of baptism is viewed returning to St. Paul’s image of dying and rising with Christ through baptism – emphasising that,
in baptism, we are implanted in the paschal mystery of Christ; we die with him, are buried with him, and we rise with him.

Before your Child is baptised Diocesan guidelines advise that parents should attend  a minimum of two pre-baptism sessions as part of a baptism preparation course.

Baptism of Older Children
a) Children presented for baptism or seeking baptism between the ages of 7 and 14 are regarded as children of catechetical age. They should be prepared for the sacrament following the Rite of the Christian Initiation of Children, part of the RCIA.

b) Children under the age of seven presented for baptism by their parents should be baptised following the usual preparation appropriate for infants – see  Infant Baptism above.

c) Young people from the age of 14 should be prepared for the sacrament following the normal RCIA process – see policy for Adult Baptism.

Baptism of Adults
The norm for adults seeking baptism is to follow the Rite of the Christian Initiation of Adults in their local parish and to be baptised at the Easter Vigil when it is discerned they are ready, following the scrutinies of the RCIA.

If you do not live in the parish but wish to be baptised in Our Lady of Perpetual Help Church, you MUST have a letter of permission from your own local Parish Priest.

If you live in the Parish but wish to be baptised outside of the Parish, the same conditions apply and  you will require a letter of permission from Father Fortunato.

It is often customary to make an offering to the Church on these occasions although there is NO charge  to receive a Sacrament.