During the Annual Procession of the famous ‘Black Madonna’ of Willesden on 12 May 2002 in Harlesden (North West London), Cardinal Cormac Murphy-O’Connor announced the formation of the ‘Guild of Our Lady of Willesden’.

On Sunday, 8 December 2002, on the Feast of the Immaculate Conception, Bishop Victor Guazzelli celebrated the Guild’s Inaugural Mass, preceded by a short procession of Our Lady. This  took place at the shrine which started at 2.30pm.

According to tradition, Our Lady has for centuries graced this ancient site not only with her presence but also with a holy well which was deemed to possess miraculous properties and gave its very name to the place (Willesden probably means ‘spring at the foot of the hill’).  Little is known about the origins of this well, though it seems to have been connected to the church of St Mary, mentioned in a royal charter as early as 939.  Likewise, little is known about the origins of the devotion to Our Lady of Willesden.  A Visitation report of 1249 mentions the presence of two statues of Our Lady, one of which must have been the ‘Black Madonna’ (probably encrusted with gold, silver and precious jewels), which was burnt in 1538 by order of Thomas Cromwell, Henry VIII’s Vicar General for Ecclesiastical Matters.

By this time the shrine had become famous and pilgrims in their hundreds, if not thousands, journeyed to the sanctuary in the heart of leafy Middlesex.  It reached its zenith at the turn of the sixteenth century, when the shrine was frequented by royalty (Queen Elizabeth of York) and future martyrs (St Thomas More), who confidently petitioned the Blessed Virgin under her title of ‘Our Lady of Willesden’.  According to a contemporary document, Our Lady appeared to a priest devotee of the shrine, a certain Dr Crewkehorne, in 1537 and said that she wished to be honoured at Willesden as she had in times past.  Confounded by opposition, Dr Crewkehorne did not carry out his charge and the shrine did not return to Willesden until the close of the nineteenth century.

It was in 1885 that a Catholic Mission was established in Harlesden to meet the demands of the growing Irish population.  The stirrings of the Blessed Virgin were felt once again and, with the help of the local Convent of Jesus and Mary, devotion was fostered to Our Lady of Willesden and a new statue blessed by Cardinal Vaughan in 1892.  From humble beginnings with twelve parishioners in 1885 the parish began to flourish and a beautiful Romanesque church was opened in 1931 as both parish church and a National Shrine for the Catholics in England. 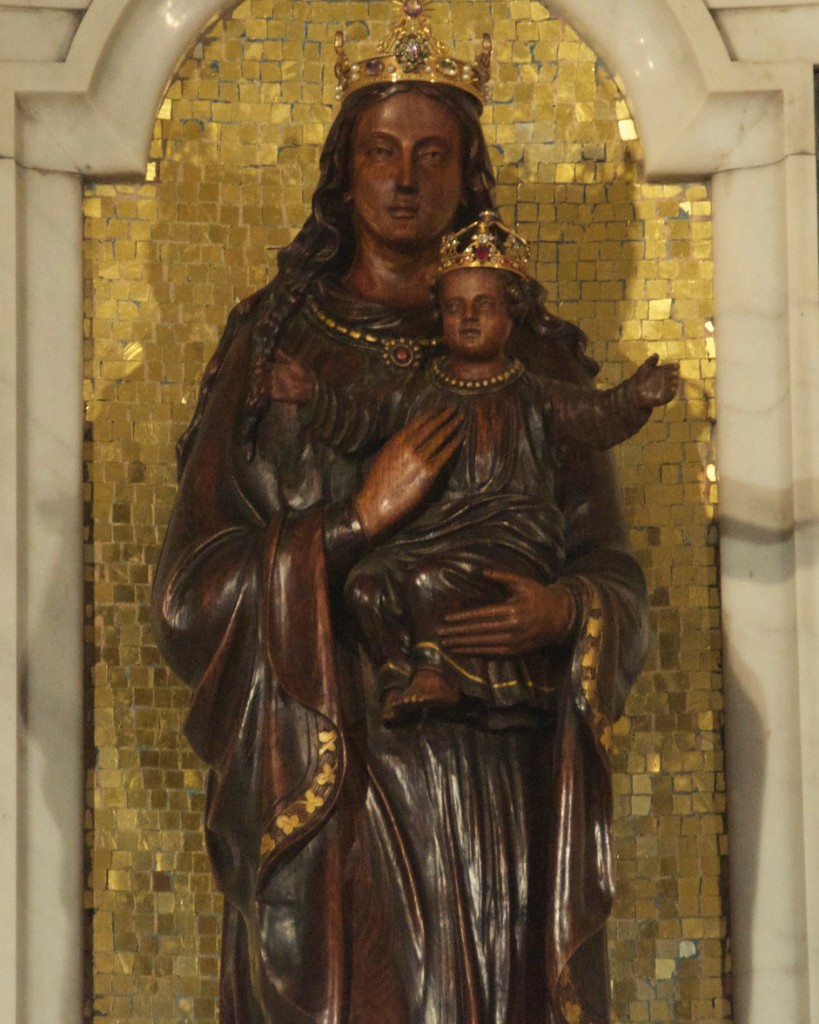 Our Lady of Willesden’s greatest day came during the Marian Year of 1954, when her statue was crowned by Cardinal Griffin at Wembley Stadium, in front of 94,000 people.  According to the Encyclical Letter, Fulgens Corona (1953), Pope Pius XII said that every diocese had a special shrine at which the Virgin Mary received fuller homage.  Willesden was made the centre of Westminster’s celebrations for the Marian Year and throughout 1954 some 60,000 pilgrims visited the shrine. Another pilgrim from the 1950s was St Josemaria Escriva, the Founder of Opus Dei, who came to the shrine several times (he re-consecrated Opus Dei to the Name of Mary here on 15 August 1958).  Thus, Our Lady once again graced Willesden with her presence and many favours were reported by the faithful.

Over a thousand years after the origins of the church of St Mary’s, the Virgin Mary still calls her children to prayer from her shrine on the edge of the centre of London’s busy metropolis.

The new Guild of Our Lady of Willesden has assumed the historic role of honouring the Mother of God at her London shrine. Under the then Presidency of H.E. Cardinal Cormac Murphy-O,Connor and with John Rick Miller as its first Master, the Guild began its formation under a tripartite charter.  The Guild strives to restore the shrine as a special place of pilgrimage where the faithful will come to ask for the intercession of the Blessed Virgin.  Membership will be drawn from all over the Diocese of Westminster and beyond and members will commit themselves to daily prayers for the protection and evangelisation of London and a weekly time of adoration before the Blessed Sacrament.  In this way the shrine will become a significant centre of prayer for those who remain committed to the Gospel and who see the urgent need to pray for these intentions. It is hoped that the shrine would also become the active Marian shrine of London, where the principal Feasts and Solemnities of Our Lady would be celebrated accordingly.

The Patrons of the Guild are Our Lady of Willesden together with St Joseph, St Michael, St Edward the Confessor, St Thomas of Canterbury, St Thomas More, the Holy Martyrs of London as well as the city,s Guardian Angel.